The GE Chandelier, as it is called, was designed by Montreal’s Lumid and uses LEDs and light modules built by GE.

Playhouse Square is America’s largest performing arts district outside New York’s Broadway. Many of the area’s theaters were saved from demolition in the 1970s and the chandelier marks the culmination of the area’s revival.

The chandelier hangs some 44 feet above the street from a special steel frame designed by a roller-coaster company. The structure can support five times the weight of the 8,500-pound fixture.

The builders exposed the chandelier and the crystals to freeze and thaw tests (see GIFs up top and below) because of Ohio’s harsh winters. Rather than using glass, they made the crystals from light acrylic resin, which is “practically indestructible,” says Tom Einhouse, vice president for facilities and capital at PlayhouseSquare.

Dominique Alary, president of Lumid - the Montreal company that built the chandelier, said that the design can handle two inches of ice surrounding the crystals. This extreme icing brings the weight of the fixture to 32,000 pounds.

The LED, or light emitting diode, was invented in GE labs by Nick Holonyak. LEDs can last thousands of hours and use a fraction of the power required by standard light bulbs.

GE LED lights also illuminate London’s Tower Bridge, the Statue of Liberty, famous sports arenas and other venues and landmarks. The Tower Bridge system, for example, can cut the landmark’s energy demands by 40 percent and stay in place for 25 years.

LED fixtures are also getting connected to the Industrial Internet. One such system will soon allow cities to harvest data from street lights, manage maintenance, monitor usage, and identify and eventually anticipate power outages. GE’s next-generation Roadway “intelligent” lighting, for example, will allow communities to remotely adjust their street lighting and alert utilities to power outages. 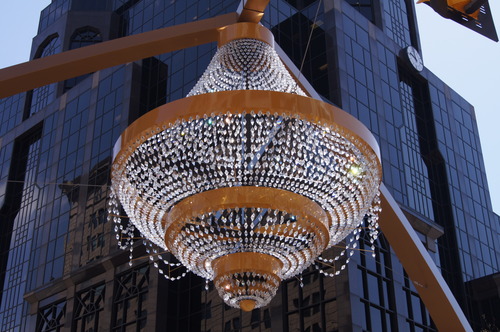 Cleveland is the birthplace of GE’s lighting business. Last April, the company celebrated a centenary of its Nela Park labs, where GE founder and Ohio native Thomas Edison experimented with early light bulbs.