This Scientist Has Turned The Tables On Greenhouse Gas, Using CO2 To Generate Electricity

Solar power is a great source of renewable energy, but as with many things in life, timing is everything. The sun doesn’t shine on long winter nights when people turn on their lights. On the other hand, a sunny Sunday afternoon can produce an ample electricity surplus that’s difficult to store.

“That’s the grand challenge,” says Stephen Sanborn, senior engineer and principal investigator at GE Global Research (GRC). “We need to make renewable energy available to the grid when it is needed.”

Sanborn and his team decided to solve this problem by storing some of the heat generated by thermal solar power plants in carbon dioxide. These power plants concentrate solar rays with vast fields of mirrors and use the heat to generate steam that spins a turbine. The carbon dioxide effectively works like a battery that can quickly release energy during peak demand.

The irony, of course, is that CO2 is the prime contributor to climate change, and the reason the world is switching to renewable energy in the first place.

The work is part of a research partnership between the GRC and the U.S. Department of Energy. Sanborn says the solution could revolutionize the solar power industry and also make natural-gas power plants more efficient. 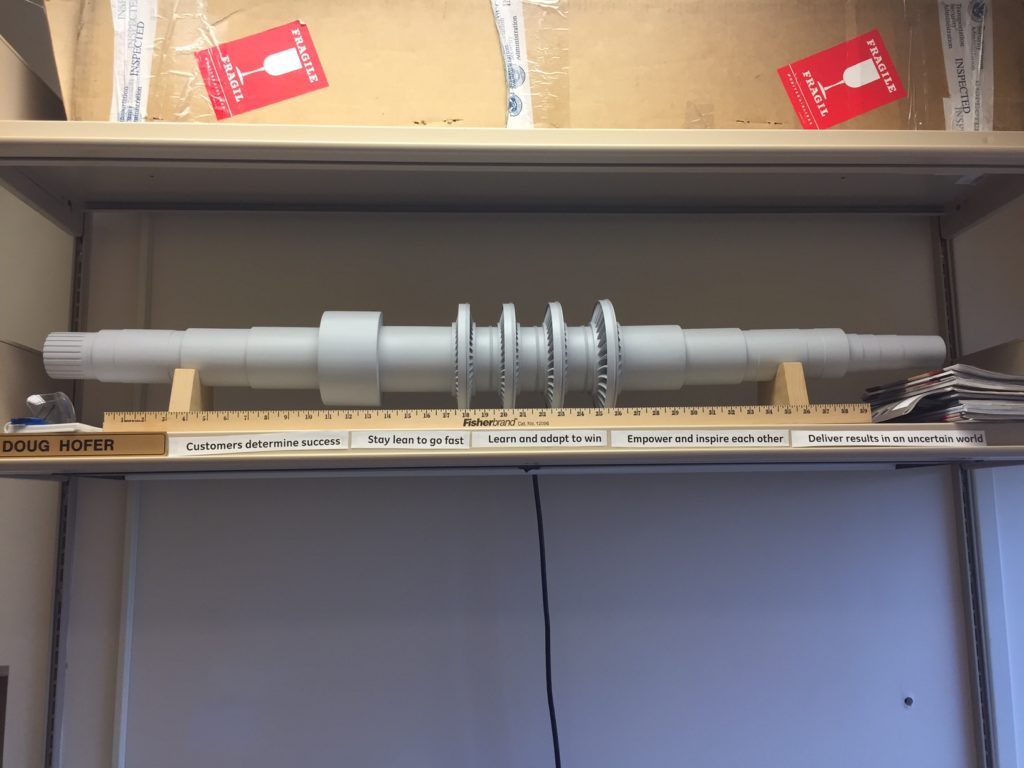 Top image: A solar thermal power concentrates heat from the sun to boil water and use the steam to generate electricity. Image credit: Getty Images Above: A life-size prototype of GE’s “sunrotor” on a shelf at GRC. This 10 megawatt prototype is the basis for the full-scale system which stores 100 megawatt-hours and generates power at 33 megawatt, Sanborn says. Image credit: GE Global Research


Here’s how it works. The design has two main parts. The first one collects heat energy from the sun and stores it in a liquid of molten salt. “This is the hot side of the solution,” Sanborn says. The other component uses surplus electricity from the grid to cool a pool of liquid CO2 so that it becomes dry ice.

During power generation, the salt releases the heat to expand the cold CO2 into a supercritical fluid, a state of matter where it no longer has specific liquid and gas phases. It allows engineers to make the system more efficient.

The supercritical fluid will flow into an innovative CO2 turbine called the sunrotor, which is based on a GE steam turbine design. Although the turbine can fit on an office shelf (see image above) it can generate as much as 100 megawatts of “fast electricity” per installed unit—enough to power 100,000 U.S. homes.

Sanborn believes that a large-scale deployment of the design would be able to store “significant amounts” of power —— and deliver it back to the grid when needed. “We’re not talking about three car batteries here,” he says. “The result is a high-efficiency, high-performance renewable energy system that will reduce the use of fossil fuels for power generation.”

He says the system could be easily connected to a solar power system or a typical gas turbine. The tanks and generators could fit on trailers. His goal is to bring the cost to $100 per megawatt-hour, way down from the $250 it costs to produce the same amount in a gas-fired power plant. “It is so cheap because you are not making the energy, you are taking the energy from the sun or the turbine exhaust, storing it and transferring it,” says Sanborn.

The process is also highly efficient, Sanborn says, yielding as much as 68 percent of the stored energy back to the grid. The most efficient gas power plants yield 61 percent.

The team is now building a conceptual design, which Sanborn believes could take five to 10 years to get from concept to market.

GE is also looking at other commercial applications that could be made available sooner. One such utilizes the waste exhaust heat from a natural gas generator. Sanborn says the solution could make gas-fired power plants 25 to 50 percent more efficient. That, he says, would be a major environmental benefit, because it would significantly reduce the overall CO2 emissions per kW hour of electricity produced by gas-powered plants.

Sanborn’s included in his team turbine experts, thermal engineers who understand refrigeration, heat-transfer scientists, chemical engineers who know how CO2 behaves and energy-storage experts. “We call all this expertise we have at our fingertips the GE Store,” he says. “It would be very difficult for me to do everything that this research calls for without that deep expertise of people available at GE.”