Most travelers don’t have a garbage dump on their travel itinerary. But for people like José Baroni, it’s the top destination.

Baroni spent the last two years commuting to a growing landfill in Guatapará City, a small town some 200 miles west of Brazil’s largest city, São Paulo. The landfill opened in 2007 and every day it receives a convoy of trucks filled with 3,500 tons of household and industrial waste from the big city. All that waste is producing copious amounts of landfill methane, and that’s what Baroni’s after.

Baroni is a sales manager at GE’s new Distributed Power business in Brazil. His job is to help customers like Estre and ENC Energy, the partners that operate the landfill, to capture the methane and turn it into electricity. “The Brazilian government wants more electricity produced by renewable resources,” Baroni says. “Using landfill methane as a fuel is a good way to do it.” 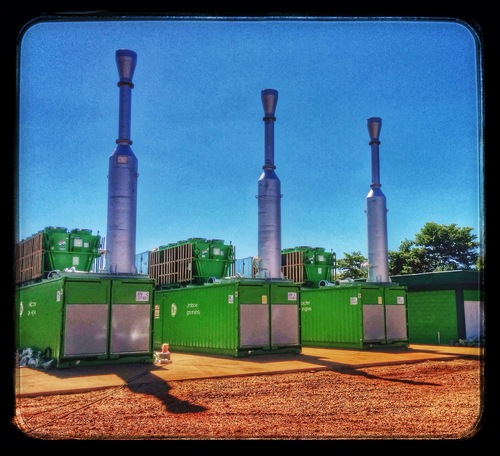 Earlier this year, Baroni’s business installed three powerful Jenbacher gas engines at the Guatapará City landfill (see above). Together they can generate 4.2 megawatts, enough electricity to power 13,000 Brazilian homes, or more than the entire population of Guatapará.

There are four other Jenbacher-powered projects like this one in Brazil and hundreds more around the world. GE has been converting landfill methane into electricity for 25 years.

GE has installed more than 1,650 Jenbacher engines at landfills in over 30 countries, including recently at a large municipal waste dump in Paris. Together they generate over 1,650 megawatts of electricity, and remove millions of tons of greenhouse gases from the atmosphere.

Landfill gas is produced by the respiration of anaerobic bacteria deep in the oxygen-free guts of garbage dumps. Unlike natural gas, which is mostly methane, it includes impurities such as nitrogen and carbon dioxide. They can cause problems during burning, but GE engineers designed the Jenbacher engines so they can swallow the impurities and run at full load despite fluctuations of gas quality and pressure.

Projects capturing landfill gas are not going away anytime soon. The Environmental and Energy Study Institute estimates that in the U.S. alone landfills release in the atmosphere some 100 million metric tons carbon equivalent every year. Methane is also 21 times more powerful in trapping heat than CO2. In America, landfills are the third-largest man-made source of methane, accounting for 17 percent of methane emissions in 2012.

“The landfill is not the prettiest place to be,” Baroni says. “But with this technology, we can turn trash to treasure.”