It took Boeing  years to develop its newest wide-body passenger jet, the 777X, but just 15 hours to fly it from Seattle to the United Arab Emirates, where the plane made its public debut at the Dubai Airshow on Sunday. First impressions? “Magnificent 777X is out to impress,” one front-page headline declared. “X-pectant,” said another.

The trip to Dubai was also the plane’s first international flight, and its longest. Propelled by a pair of GE9X engines from GE Aviation, the largest and most powerful commercial jet engine ever built, the 777-8 version of that jet is designed to carry 384 passengers 8,730 nautical miles, or 16,170 kilometers, enough to fly nonstop from New York to Auckland, New Zealand. The larger 777-9 version, which is on display in Dubai, can take 426 passengers 7,285 nautical miles, or 13,500 kilometers.

The GE9X engine, which GE Aviation started testing in 2017, is one of the plane’s innovations. The engine can supply 134,000 pounds of thrust, more than the rocket used in America’s first manned space flight. 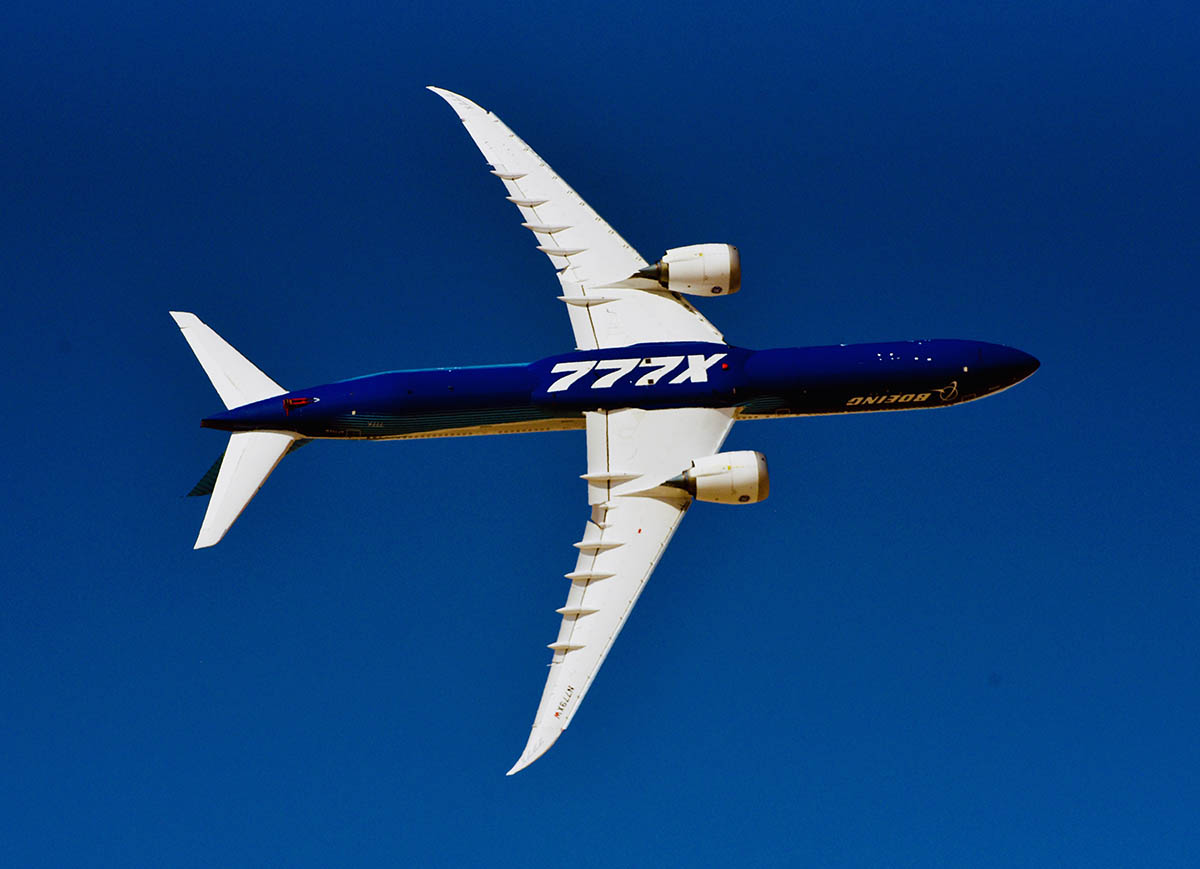 GE made the engine’s front fan from 16 fourth-generation, carbon-fiber composite fan blades. The material allowed engineers to stretch the fan’s diameter to a whopping 11 feet in diameter — as wide as the body of an entire Boeing 737. Every inch is important. By expanding the front fan on commercial engines around the core, the designers were able to preserve the aircraft speed passengers expect and make the engine more efficient.

The GE9X has a bypass ratio of more than 10:1, which means the engine is sending 10 times more air around the core and through the fan than through the core.

The engine also has parts made from advanced materials like lightweight and heat-resistant ceramic matrix composites, and components made by advanced manufacturing technologies like 3D printing.

The design helped the team to improve the fuel efficiency of the GE9X, and lower its carbon emissions, by 10% compared with the GE90, the engine it replaced. This is a big deal, given that fuel costs represent a large share of an airline’s operating expenses.

But GE Aviation is providing the Boeing 777X with more than just raw horsepower. It also supplies Boeing with the plane’s common core system (CCS). A bit like an airplane’s central nervous system and brain, the CCS hosts the airplane’s avionics, such as computers, data networks, sensors and other electronics. One is the enhanced airborne flight recorder (EAFR), which keeps a log of flight crew audio, parametric flight data and data link communications. GE’s EAFRs are already on thousands of military aircraft and Boeing’s 787 Dreamliner jets.

GE Aviation has also worked closely with Boeing as the provider of the electrical load management system (ELMS), backup generator and backup converter for the Boeing 777X. The new power generation system produces twice the power generation of the current 777 system, while the ELMS controls 30% more power.