The Great Retrofit: How Thousands of Natural Gas Turbines Could Potentially Run on Carbon-Free Hydrogen

Natural gas seized a big growth opportunity this past decade when coal growth in power systems started to falter. Since 2011, the use of natural gas to produce electricity globally has expanded by an enormous 32%, more than twice the rate of coal growth, according to BP Statistical Review. GE’s most advanced gas turbines produce less than one-third the carbon emissions of coal-fired power plants of the same capacity. But just because thousands of gas turbines have been fixed into place in global power systems, that hardly means the world is locked into natural gas.

GE is exploring how to retrofit its F class of natural gas turbines, the largest installed fleet of turbines in the U.S., so they could ultimately burn up to 100% carbon-free hydrogen. The possibility is so tantalizing that the Department of Energy’s Office of Fossil Energy and Carbon Management recently awarded $6.6 million in funding to GE to study such a transformation. If successful, this fleet of gas turbines, numbering more than 1,600 worldwide, could eventually run on hydrogen. The prize would be compelling: hundreds of gigawatts (GW) of global turbine capacity migrating from natural gas to hydrogen, says Michael J. Hughes, high hydrogen combustion technology leader of GE Gas Power.

At the nuts-and-bolts level, transforming an older turbine to run on hydrogen would mean swapping out one combustion system for another. “The combustor is 100% removable from the gas turbine,” says Hughes. “So by ‘retrofittable,’ what we mean is that we would remove the combustor that is there and install an upgraded and more capable combustion system.” And the speed of the switch could be relatively fast, ideally measured in days. Hughes points out that customers simply don’t have the time to wait for months. “The idea would be that you wouldn’t have to change out or reconfigure the rest of the engine,” he says.

GE isn’t starting this hydrogen transformation from scratch. Over a decade ago, GE ran a gas turbine on more than 90% hydrogen as a demonstration. And for the past 20 years, a GE turbine has been running commercially, taking waste gas from its chemical process using multi-nozzle quiet combustor (MNQC) technology. The hydrogen content of that fuel has varied from about 70% to around 95%. 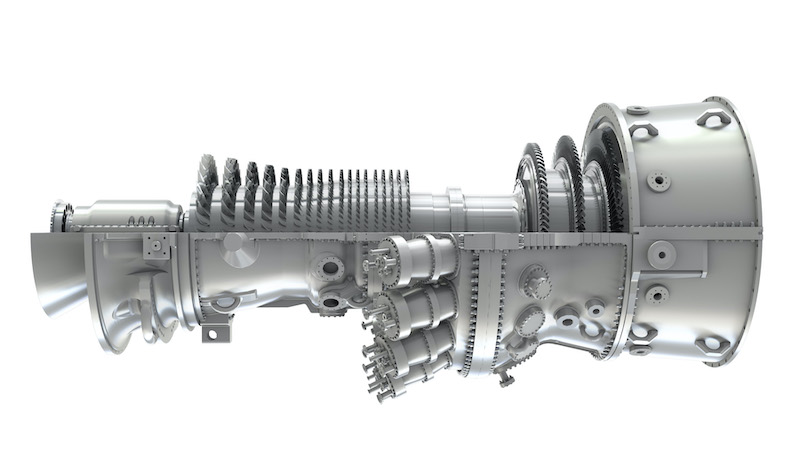 And GE’s F-class turbine already has the capability to burn up to 20% hydrogen when blended with natural gas and configured with a combustion system called DLN 2.6+. DLN stands for dry low NOx, which means that there is no need for water or steam injection to deliver low NOx emissions. That level of hydrogen could go even higher when another system, an MNQC, is installed. MNQC systems, however, require water or steam injection, which results in a cycle efficiency penalty, and they increase complexity. By contrast, GE’s 100% hydrogen-capable project will employ a water- and steam-free DLN system.

So while hydrogen is just now emerging into global power generation use, GE turbines have logged more than 8 million operating hours using blends of hydrogen and have been used by over 50 customers in 20 countries.

Hydrogen has been called the Swiss Army knife of energy. It could help reduce CO2 emissions to the atmosphere by millions of tons by the end of the decade. It can be usefully deployed in fuel cells in trucking and in aircraft engines on short-haul flights, and it can replace metallurgical coal in steelmaking. The problem is that conventional methods of making hydrogen itself produce a significant carbon footprint. Making green hydrogen — using electricity from renewable sources — is not economical yet. The big hurdle is an expensive piece of capital equipment known as an electrolyzer. In addition, the economics of generating, storing, and piping hydrogen are not well understood.

Unlike for natural gas, for example, there are no pipelines yet for hydrogen, a classic chicken-and-egg test that could be resolved when the current gaps between hydrogen supply and demand are filled. To help address these issues, the Department of Energy’s larger policy push, The Hydrogen Shot, focuses on getting hydrogen supply located near demand centers.

GE customers supported the Department of Energy’s award. Ten U.S. utility companies, with more than 241 GW of capacity, serving about 81 million customers in 39 states, wrote letters advocating for the project. It will all be put to the test starting in November, when the GE team begins engineering and testing the new combustion systems at the GE facility in Greenville, South Carolina.

“The transformation of such a vast inventory of global natural gas infrastructure would qualify as a great retrofit. We have worked with the DOE in development of many advanced technologies for our gas turbine over the years,” said John Intile, vice president of engineering at GE Gas Power. “We are proud of the collaboration and the trust that the DOE has given to us in developing the next generation of combustion technology to achieve 100% hydrogen capability for our F-class gas turbines. We are confident that this program will accelerate our efforts in reducing carbon emissions for our customers.”