The Art of Science: Take a Look at the Future of Brain Imaging

Three decades ago, engineers at GE research labs in Niskayuna, NY, built one of the first magnetic resonance machines and peered inside a colleague’s head. The result was the world’s first MRI image of the human brain. “This was an exciting time,” says John Schenck, a lead scientist on the project and also the test’s subject. “We worried that we would get to see a big black hole in the center. But we got to see my whole brain.”

That revolutionary picture may soon feel like a silent movie in the age of Avatar. A few doors down from Schenck’s office, who still works at the lab, is a new MRI system that could one day probe the microstructure of the brain with unprecedented resolution. 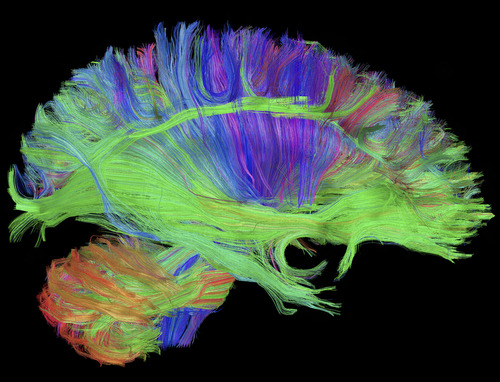 One group of researchers is looking at imaging the mobility of water molecules in the brain to better understand how the organ is wired, as well as the health and function of these connections, sort of a wiring diagram of the brain.

In the future, medical scanners could be used to study diseases ranging from stroke to Alzheimer’s, as well  as depression. Take a look at some of the images captured by the team so far.

Scientists at GE Global Research are developing magnetic resonance methods to image the brain’s white matter tissue and study the organ’s structural connectivity. Today, 25 to 30 percent of all MRI scans are brain scans. As disease modifying drugs for neurodegenerative diseases become available, the use of these drugs is likely to require more frequent monitoring through repeated scans.