The Art of Engineering: The World’s Largest Jet Engine Shows Off Composite Curves

Nick Kray is no Picasso, yet his work is on display at New York’s Museum of Modern Art. A decade ago, MoMA’s design collection picked up a composite fan blade from the GE90 jet engine that Kray helped create. The blade’s onyx black sinuous curves are pleasing to look at, but for Kray they are no longer state of the art. “We are now working on the fourth generation of that technology,” Kray says.
Kray works as a consulting engineer for composite design at GE Aviation. In the 1990s, he was part of a GE high-stakes gambit to make the front fan of its largest jet engine from epoxy and carbon fibers.

The blades from the material, called carbon-fiber composite, allowed GE’s aerospace engineers to design the GE90, still the world’s largest and most powerful jet engine. It’s also GE Aviation’s most profitable machine. “Our competitors make jet engine fans from titanium and steel and even some of our own people weren’t initially so hot about using composites,” Kray says. “Nobody had tried this before.”

The engineering is so difficult that to this day, GE is the only company with composite fan blades in service. They work inside the GE90 and the GEnx engines that power many Dreamliners. The material allowed GE engineers to design blades that result in lighter and more efficient engines, allowing airlines to save fuel by shedding precious pounds.

Now Kray and his team are busy building the future. They are working on a fourth generation of the blade for the GE9X, GE’s largest engine yet, designed exclusively for Boeing’s next-generation wide-body jet, the 777X.

GE has already received orders and commitments for 700 GE9x engines valued at $29 billion (list price) from several growing Middle Eastern airlines like Emirates, Qatar and Etihad, as well as Lufthansa, Cathay Pacific and All Nippon Airways. Last November at the Dubai Air Show, Emirates also signed a $16 billion deal with GE Aviation to service its GE9X engines for a dozen years after they enter service. 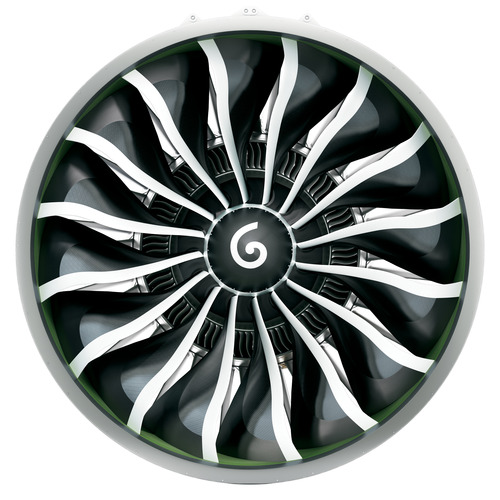 Top image: The GE90 powers many Boeing 777 jets, including this China Airlines plane. Above: A drawing of GE9X engine. Where the GE90 has 22 fan blades, the GE9X will have just 16 blades made from 4th-generation carbon fiber composite. Image credit: GE Aviation

The blades will feature several new components, Kray says. They will use stiffer carbon fibers so GE can make them longer and thinner. Their trailing edge will be made from a special structural glass fiber composite that can better absorb impact energy. “Carbon fiber is very stiff and not that flexible so that when a bird or something else hits the blade, it creates a shockwave deep inside it,” Kray says. “But the glass composite can deform better and deflect stress on the blade.”

GE will also replace the titanium leading edge that is currently used on GE90 and GEnx blades with steel. “It’s a strong material that allows us to keep the new blade thin in shape to maximize performance,” he says. “If you are an aero guy, thinner is always better. We want the best performance that’s humanly possible.” 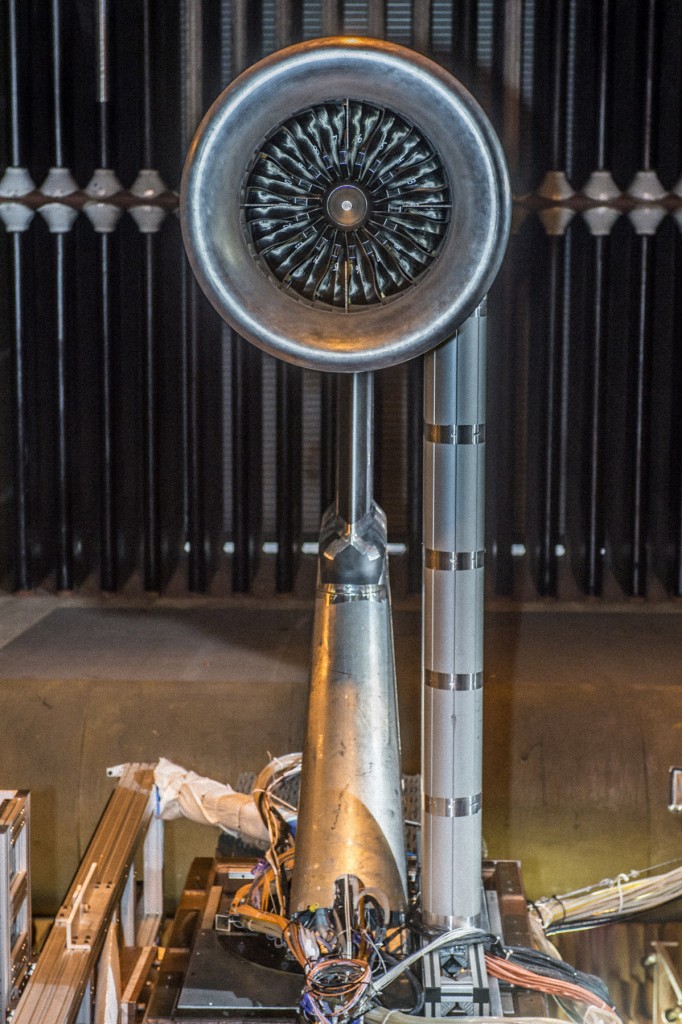 GE is testing the new design for the GE9X blades on a scaled-down testing rig at Boeing. Image credit: GE Aviation

Where the GE90 has 22 blades and the GEnx holds 18, the GE9X will have only 16, even though it is the largest of the three.  Besides making the engine lighter, the fewer and thinner blades will also spin faster. “This is great for overall engine performance by matching the entire low pressure fan and turbine system to peak performance,” Kray says. “It’s something the engineers have been asking for.”

The blades still retain their beautiful, sinuous curves, forward sweep, a hook at the top and the belly in the center. Says Kray: It’s an amazing technology.”

When GE designed the GE90 carbon-fiber composite fan blade, it was not starting from scratch. In the 1980s, the company developed the experimental GE36 open rotor engine. It had used carbon fiber composite blades in an unusual hybrid design that combined features from turbofan and turboprop engines. 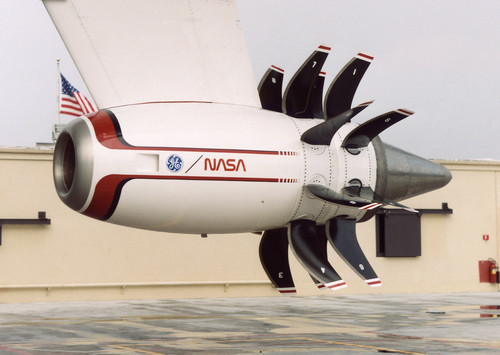 The GE36 was the first GE engine with composite blades. But they were on the outside. Image credit: GE Aviation

Although the engine demonstrated fuel savings of more than 30 percent compared with similarly sized conventional jet engines, it did not catch on.

Back in the lab, challenges abounded. Typical titanium blades absorb energy and bulge when they hit obstacles such as a bird. But ordinary composites can delaminate and break. “We didn’t know how this new material would respond to stress,” Kray says.

The team ran hundreds of intensive tests simulating bird strikes, rain, snow and hail storms at GE’s jet engine boot camp in Peebles and the Wright Patterson Air Force Base, both in Ohio. “We’d test almost daily and make changes based on what we learned,” Kray says. “The results gave us enormous confidence in the material when we saw how durable it was.”

By 1993, the team had the right material and blade design, but they were far from done. They still had to produce it. GE Aviation teamed up with its European jet engine partner Snecma. The French aerospace company was experienced in making high-tech composites. They formed a joint-venture called CFAN and built a new composites factory in San Marcos, Texas.

Even with the help, making the blade was a hard climb. “The manufacturing of composites remains a manual process,” Kray says. “The material goes through chemical changes and tends to move around. We had to learn how to get it right.” 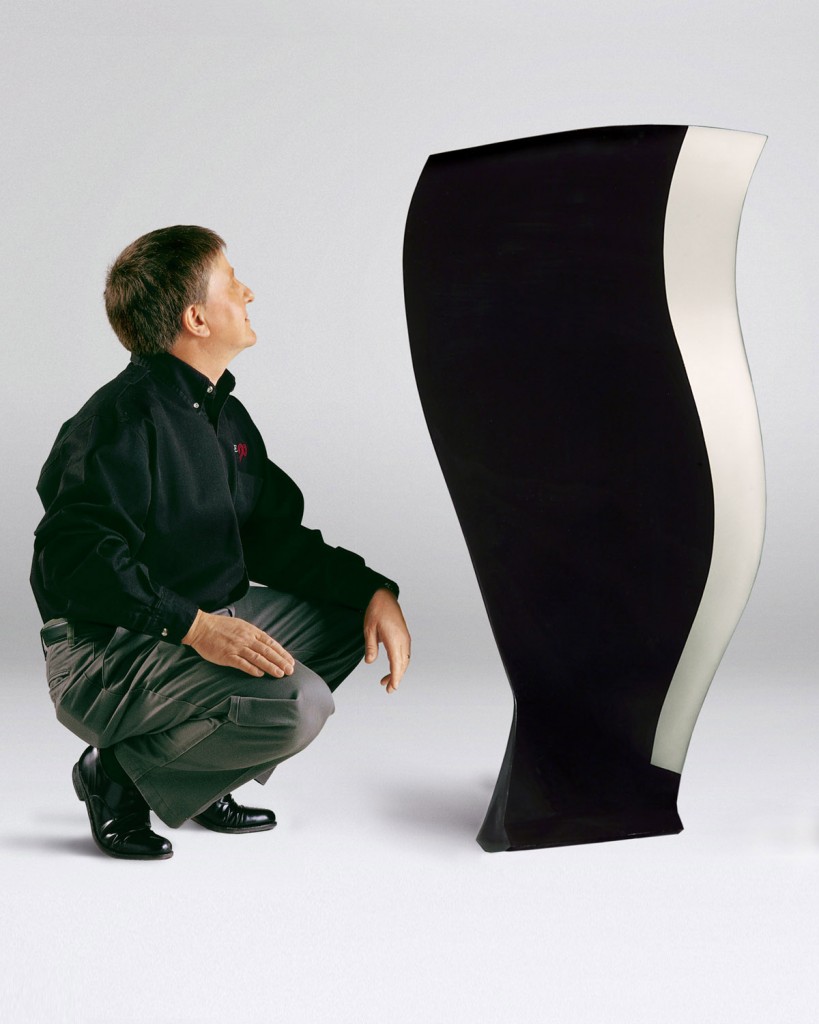 Each GE90 engine has 22 carbon fiber blades. The GE90-115B is engine is still the world's largest and most powerful jet engine. Image credit: GE Aviation

The workers inspected every single blade with X-rays, ultrasound, laser and other tools for defects. Initially, only 30 percent of them passed. (The current yield is about 97 percent.)

The Texas workers weren’t learning about composites alone. GE also had to explain the material to regulators, and even to Boeing, who wanted to use it on its 777 long-range jet. The first one was scheduled to leave its plant in 1995. “On top of everything, we were racing against time,” Kray says. “It was a very steep learning curve.”

Ultimately, the wager paid off. Even though the GE90 engine had fan diameter of 128 inches, larger than its predecessors, the composites shaved 400 pounds off the machine. The GE9X’s fan will be 134 inches in diameter.

A rendering of the Boeing 777-9 plane with a GE9X engine. Image credit: GE Reports

The Federal Aviation Administration certified the engine and the composite blades in February 1995. “The engines essentially opened the globe up to incredibly efficient, twin-powered, wide-body planes,” says David Joyce, president and CEO of GE Aviation.

The engine wasn’t shy about showing its power and grace. In December 2002, the GE90-115B version of the engine achieved a Guinness World Record as the most powerful jet engine ever built, generating thrust in excess of 127,000 pounds – more than early space rocket engines. In 2005, a GE90-powered Boeing 777 set another world record, this time for distance traveled non-stop by a commercial jetliner. The plane covered 11,664 nautical miles between Hong Kong and London in 22 hours and 42 minutes. In 2007, the Museum of Modern Art in New York included the curved composite blade in its design collection.

Even after 20 years, GE is still the only jet engine maker with engines using composite blades in service. Kray and other engineers are currently working on a fourth-generation blade for the GE9X engine for the 777’s successor, Boeing 777X. That plane will be the largest and most efficient twin-engine jet in the world. “Next-generation composites will go even further,” Kray says. “We are never going back to metal.”