Team Spirit: What It Takes To Build A Factory That Makes The World’s Longest Wind Turbine Blade

Following the D-Day invasion, few prizes were as valuable to the advancing Allies as Cherbourg, a large French deep-water port located just northwest of the Utah and Omaha landing beaches in Normandy. Commissioned by France’s last king, Louis XVI, championed by Napoleon and occupied by Nazi Germany during World War II, the port was key to opening a direct shipping route for supplies from the U.S. The Germans garrisoned there knew it well — and put up a fierce fight. By the time American and British troops took control of Cherbourg in late June 1944, much of it was wrecked and its harbor mined.

It took the Allies more than a month to open the port to convoys of American Liberty ships carrying coal, construction supplies, heavy vehicles, ammunition and other cargo — and to turn Cherbourg into the busiest port in the world, at least for a year. One crucial vessel aiding the city’s revival, though, had no cargo at all. Badly wounded during a sea scrape with a Nazi U-boat just a few months before, the USS Donnell had to be towed to port and tied to the harbor wall. But because the destroyer possessed two working GE gas turbines it had used for propulsion, the Navy converted it into a floating power plant. Through cables coming out of the torpedo bays, the ship supplied Cherbourg with its lifeblood — electricity — after liberation.

Today, another kind of GE dynamo is coming to life near Cherbourg’s sprawling beaches and scarred stone fortifications. In 2018, LM Wind Power, a subsidiary of GE Renewable Energy, opened a huge new factory the size of several football fields just a short drive from the port’s concrete quays. Workers here are making the world’s longest wind turbine blades for the world’s most powerful offshore wind turbine. In July, the company said it plans to hire more than 200 employees in 2019, bringing the total to more than 320 by the end of the year. “We look for different things; the ability to follow instructions and do precise work, and team spirit because it takes many people working together at the same time to make a blade,” says Erwan Le Floch, the plant director in Cherbourg. “Some of our new employees have only recently worked as fishmongers or bricklayers. We don’t hire people who know how to make blades, because few people in France know how to make blades.”

With 15 factories spread around the world, LM Wind Power is the largest designer and manufacturer of blades for wind turbines. Since 1978, when the company started making blades, it has produced more than 215,000 blades for turbines with a power generation capacity of about 102 gigawatts, more than the total capacity of all working nuclear power plants in the U.S. But the Cherbourg facility is different than its other plants. It is the company’s first factory in France, making a product that has never been manufactured before: a blade that is 107 meters long — that’s longer than a professional soccer pitch — and measures some 5.4 meters in diameter at its wide end. The blades will spin the generator of GE Renewable Energy’s 12-megawatt Haliade-X offshore wind turbine, each capable of supplying 16,000 European homes with electricity. (GE makes generators further down the coast in Saint-Nazaire.)

The plant is so new that just two years ago, the spot where it stands was no more than a flat expanse of land abutting one of Normandy’s endless shallow sandy beaches. “This site is really fascinating because we have never had a plant with such a high level of complexity,” says Lukasz Cejrowski, the project director who led the development of the new blade and helped open LM Wind Power factories in Europe, the U.S. and China. “We have a factory in a country where we’ve never operated before, we have a high level of automation and we have a product that’s actually quite big. Then we have all the new people.” But Cejrowski and his colleagues aren’t afraid to mix all these ingredients together because, he says, the company has “the perfect recipe for success.”

The key to this recipe is minifactories located at each plant — LM Wind Power calls them centers of excellence — where new hires, including senior managers, spend three to four weeks learning how to make giant blades. Plant director Le Floch, who joined LM Wind Power in April 2018 from a senior management position at a Cherbourg shipyard, and Anderson Pinho, who’s in charge of production at the plant, were among those who participated in the training. Pinho is an industry veteran who managed the production of high-grade steel components for jet engines, submarines and nuclear power plants before he joined LM Wind Power in August 2018. “This was completely new to me,” Pinho says. “I’ve never worked with fiberglass composite materials before. We had a new team, new factory, new process. It was a massive challenge.” 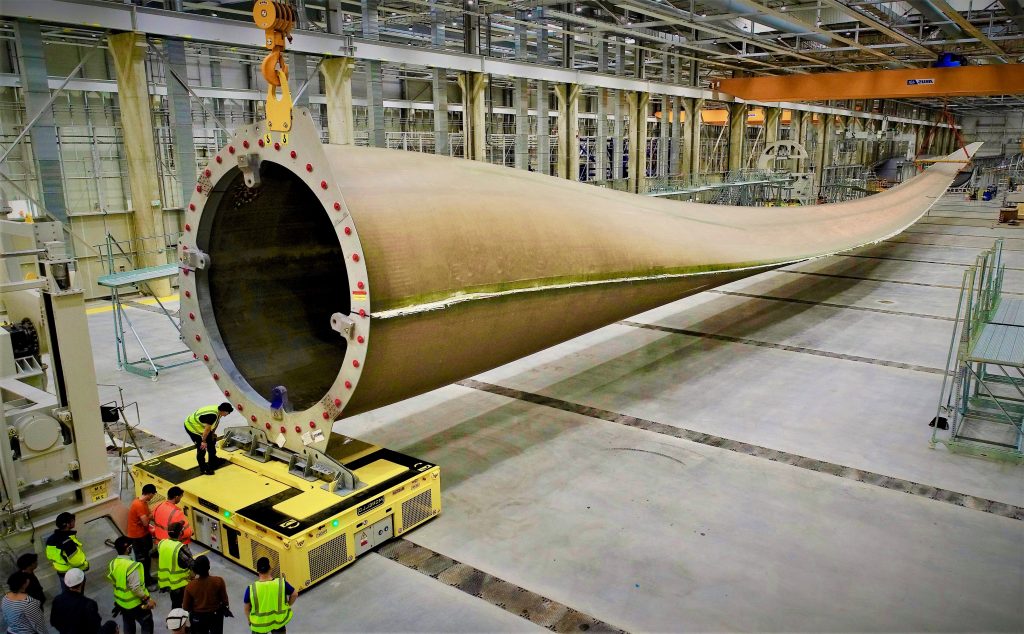 The plant in Cherbourg is LM Wind Power's first factory in France. The blades made here are 107 meters long — that’s longer than a professional soccer pitch — and measure some 5.4 meters in diameter at their wide end. Image credit: GE Renewable Energy/LM Wind Power.

Each class typically has around 20 workers guided by a pair of trainers. They spend the first week in a classroom listening to the theory behind building the blades and attending lectures on quality and safety. Then they move into the minifactory, where they spend two to three weeks applying their new knowledge and build scaled-down versions of actual blades. After the parts stiffen, trainers guide them to sand down small parts of the shell, where they learn how to count the layers and spot defects. “We are focusing on the process, safety and quality,” says trainer Pierre Geyer.

The process of making wind turbine blades still shows LM Wind Power’s beginnings as a Danish fiberglass and sailboat company. “You hear stories that in the beginning, people used to go to the factory on Sunday and make their own boats from scraps,” says Sarah Ruffenach, who runs logistics at the Cherbourg plant. (Some LM Wind Power factories now work with schools and use leftover material to make garbage cans, broomsticks and other goods for community projects.)

Typically, workers make the blades from layers of fiberglass fabric and balsa wood. The result, which looks like squished phyllo dough, is called a composite. They line the individual sheets and wood inside special molds honed and polished to produce the right aerodynamic shape. Next, they cover the layers with foil, pump the air out to create a vacuum and inject a special resin to fuse them together. The vacuum helps the resin seep into the tiniest nooks and create a solid shell. “It’s part art and part science,” Ruffenach says. “It’s almost like water going into leaves on a tree." 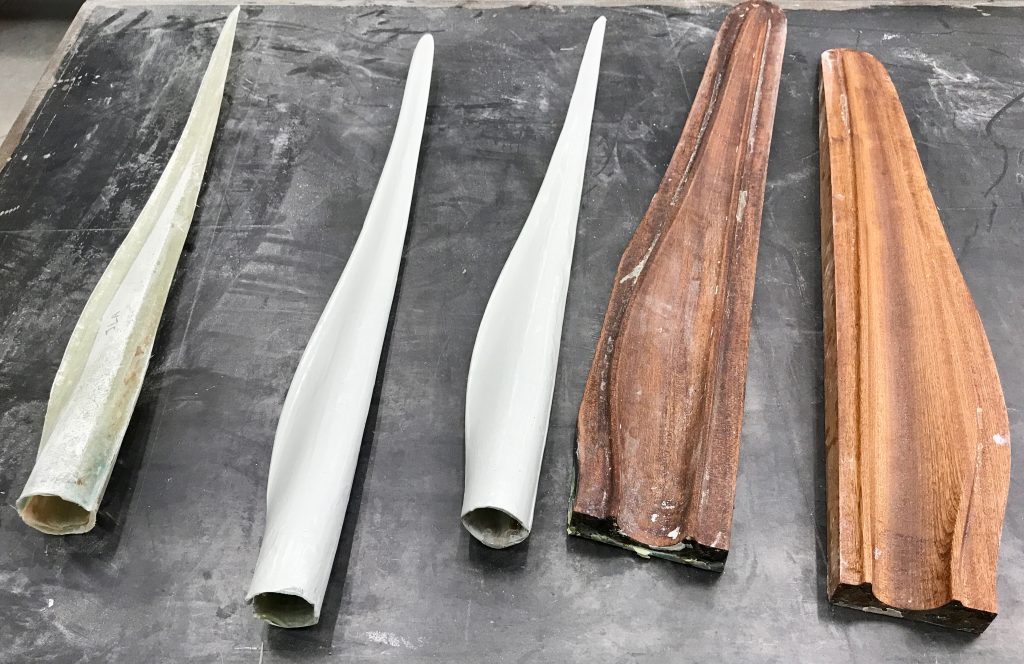 To learn how to make the world's longest blade, you have to start small. The company runs a minifactory in Cherbourg where new employees learn the basics of the blade making process. Image credit: Tomas Kellner for GE Reports.

The process sounds straightforward, but workers are dealing with an object the length of a football field, being filled with resin that quickly turns from liquid to solid. The workers, donning white Tyvek coveralls, respirators and protective eyewear, resemble an extraterrestrial ballet company. “This is a very critical operation,” says Cejrowski. “If you are not well-synchronized, you will lose the blade.”

When the shells harden, the workers remove them from the mold and join them together — two half shells to make a blade — inside a long, curving clamp that looks like a piece from the set of the movie “Alien.” Finally, they sand, polish and paint the blades, and dispatch them to customers.

Because the blades they make in Cherbourg are so long and heavy — clocking in at 50 tons each — the workers use a special hybrid fabric woven from fiberglass and carbon fiber, which helps give load-carrying parts of the blade a combination of high stiffness and low mass. “You need years of a proven track record to be able to do this,” Cejrowski says. “You cannot build a 107-meter blade out of nowhere. You need to burn your fingers on the smaller stuff, see what doesn’t work, learn from it and find a solution. That way you end up with a product that no one else can make.”

The team also relies increasingly on large robots to handle them — they are so long it would take world-record runner Usain Bolt 10 seconds to sprint from one end to the other. For example, one robot suspended from the factory’s cavernous ceiling helps workers attach large fiberglass ribs that further stiffen the blades. Another helps turn and move the blades out of the production hall. “We have two of these attached to the blade 70 meters apart and they can bring the blade outside themselves,” Le Floch says. “It looks like an Amazon warehouse, except the product is much bigger.”

Because the manufacturing process is so important — the details are also a closely guarded secret — managers at the factory constantly debrief and assess every new worker and create an individualized “skills matrix,” a tool that shows them what skills they can perform and at what level. “We want to start a discussion to see if they feel comfortable performing a task, if they have any questions,” Geyer, the trainer, says. “Sharing also helps us create a team spirit in the group.”

Team spirit is at the core of how LM Wind Power operates. Just like resin infusing the fabric layers of a blade, the company sends freshly trained employees to spend two months at factories in Europe and Canada, honing their skills alongside more-seasoned blade makers. It also deploys veteran employees like Cejrowski and Ruffenach to new factories around the world to share their knowledge with management and workers. “We ask the most experienced and dedicated people to mentor in new factories,” Cejrowski says. “If someone is willing to travel, discover new places and combine it with their work, I think this is the right business for them.”

Adds Pinho: “This is really the essence of what we do here. I’ve worked at quite a few companies, but I haven’t seen that before.”