More than 1 million drones already fill the skies in the U.S. But the vast majority, almost 90%, are high-priced toys sold at retail stores. If drones can get the OK for use in commercial situations — such as infrastructure inspection, agricultural operations, even package delivery — analysts see the potential for an industry worth tens of billions of dollars in the next few years. Commercial drones are mostly still grounded due to the complexities of flying drones responsibly and efficiently in crowded environments that include other drones, manned aircraft and a host of obstacles from power lines to buildings. We’ve been here before: While history pegs manned flight to the Wright brothers’ 1903 flight, it took more than two decades before commercial aviation happened.

To spur the unmanned aerial vehicles (UAV) industry at a faster pace, a group of scientists, companies — including GE — and government agencies are developing a set of rules for safely using drones. The latest step toward getting UAVs ready for everyday operation is occurring in the skies over Reno, Nevada.

GE and Auterion, a drone software developer, are examining how different software and hardware packages can work on board a panoply of UAVs and how they communicate with ground-based pilots and the developing traffic-control network. In early April at Reno-Stead Airport, the companies started testing drones with “full stack solutions,” complete software and hardware packages that resemble what a commercial drone will use to operate every day. GE Aviation has provided airborne computing hardware, flight management, safety management and integration capabilities, while Auterion is providing a PX4 flight controller, operating system and airborne software that resides on the vehicle, in the cloud and at the ground station that the craft communicates with.

GE has been in the center of a number of commercial UAV proof-of-concept and testing projects. In October, GE Aviation, GE Research and AiRXOS, a drone support services business launched by GE, took part in a five-day, 53-sortie testing of collision avoidance systems and beyond-line-of-sight operation in upstate New York. While the environment in New York was largely rural, the efforts in Reno will allow further study of managing drones in urban environments. So far testing has been at the airfield, but as the project progresses through the summer, the plan is for UAV flights over the city of Reno. For drones to be viable on any scale, they have to operate well in uncontrolled environments, including cities, airspace that is shared with manned aircraft, and any other place where the terrain isn’t completely known ahead of time. 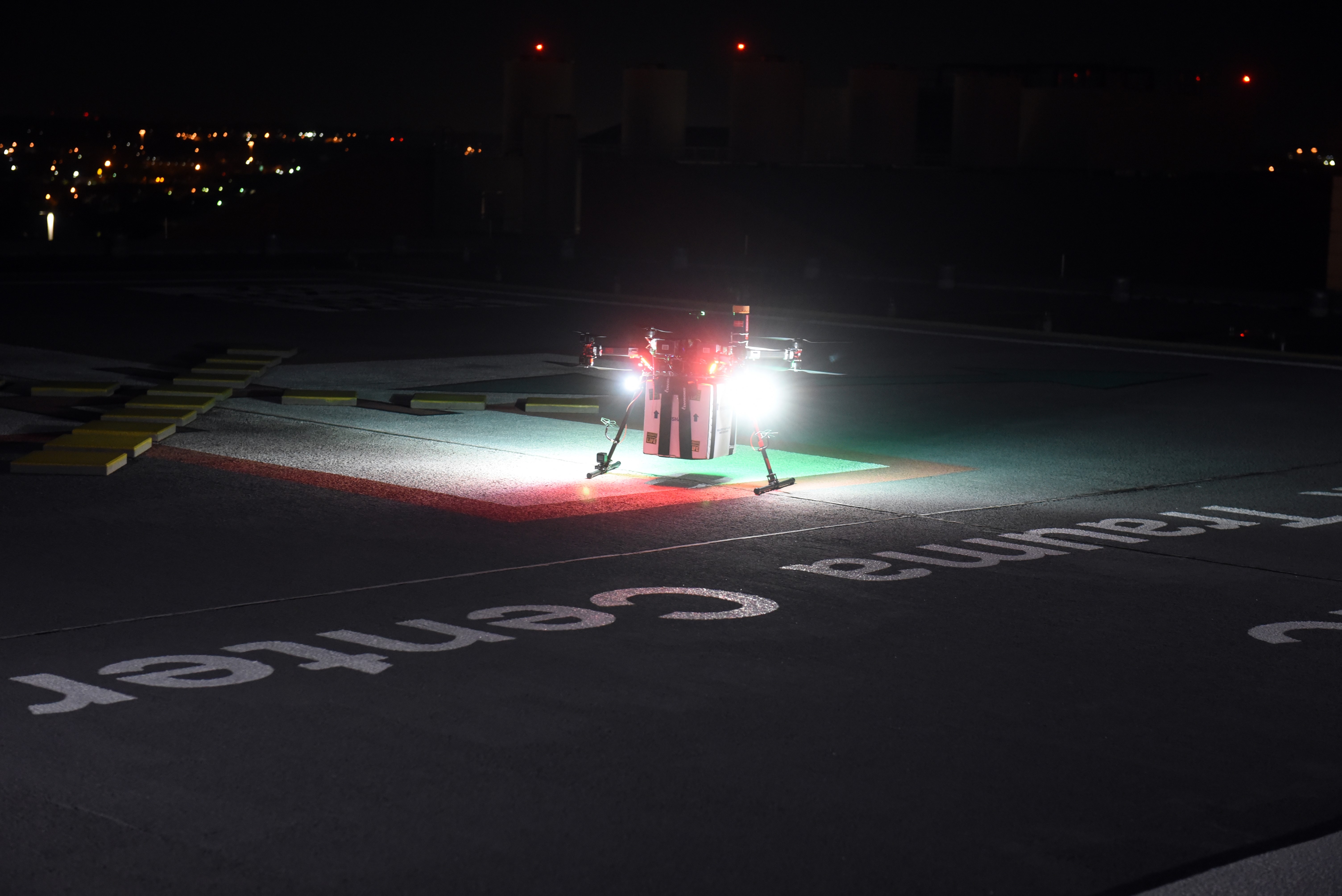 Top GIF: GE and its partners started testing drones complete software and hardware packages that resemble what a commercial drone will use to carry out tasks that can include wind farm inspection. Image credit: GE. Above: Also in April,  a drone for the first time successfully delivered a human kidney for a successful transplant  from Baltimore’s St. Agnes Hospital to the University of Maryland’s medical center 2.7 miles away. To monitor the flight and track communications, the drone was using the Air Mobility Platform deloped by AiRXOS, a unit of GE Aviation. Image credit: AiRXOS.


The potential for drones is massive — consulting firm McKinsey projects it could be a $46 billion business segment by 2026. There is a lot of complexity to work through before that happens, however. To start with, dozens of types of drones will be used for a wide variety of tasks. Pipeline inspection, for instance, would be better suited to larger, fixed-wing UAVs, while wind turbine maintenance needs machines that can hover in place. Consumer-focused applications, like deliveries, will probably require drones that can both fly and hover. In particular, drones are seen as imperative for dangerous but essential tasks, like power line maintenance, which causes multiple inspector and pilot deaths each year.

“When you think about civil UAVs, it’s historically been very limited types of operations,” says Marc Luley, general manager of autonomous and advanced solutions at GE Aviation. “But now we’re really starting to see the commercial part of that branch off. They can conduct different types of missions that either humans cannot conduct or are better suited for humans not to do, and they can do things in ways that are far more cost-effective.” The operations GE is undertaking in Reno are a large step toward a holistic commercial system.

Longer term, GE Aviation is also puzzling out how to manage and interpret the data that unmanned vehicles generate internally, from sensors monitoring flight performance to their interactions with other aircraft and the ground. Experience with UAV use by the U.S. military shows that drones can quickly flood networks and operators with waves of data. Wrangling the data that commercial UAVs generate will be a large part of continually improving the commercial UAV industry, similar to how the aviation industry has used data to continually hone its operations since the well-known flight at Kitty Hawk, North Carolina, in 1903.

“It has taken decades for commercial flight to happen safely and efficiently,” says Matt Vacanti, senior product manager of commercial unmanned aircraft systems for GE Aviation. “Now we have this burgeoning commercial UAV industry that is getting off the ground in a very rapid way. We have the opportunity to influence the future of aviation.”