Imagine a world where doctors tailor treatments to patients based on their medical histories, genetic makeup and other factors. It’s called precision health, and it’s the latest step in healthcare’s evolution.

The precision health movement, which is valued at tens of billions of dollars, is already afoot, and hospitals and healthcare companies are investing in tools and technologies to make it grow.

The latest example involves GE Healthcare entering into an agreement to acquire BK Medical, an advanced surgical visualization company. BK Medical’s technology helps clinicians see inside a patient’s body in real time during surgery, gives them visual information that guides them during procedures and helps them make critical decisions. These insights can be especially useful in the growing field of minimally invasive and robotic surgery, designed to cause less pain and trauma, reduce complications and send patients home faster.

“Ultrasound today forms an integral part of many care pathways,” said Kieran Murphy, president and CEO of GE Healthcare. “This transaction helps GE Healthcare continue to expand beyond diagnostics into surgical and therapeutic interventions, simplifying decision-making for clinicians and equipping them with greater insights to deliver faster, more personalized care for their patients — representing another step toward delivering precision health.”

“Adding the fast-growing and relatively new field of real-time surgical visualization to GE’s pre- and post-operative ultrasound capabilities will create an end-to-end offering through the full continuum of care — from diagnosis through therapy and beyond,” added Roland Rott, president and CEO of GE Healthcare Ultrasound. “GE Healthcare and BK Medical share a passion for clinical innovation, and I’m excited to welcome BK Medical to our team.” 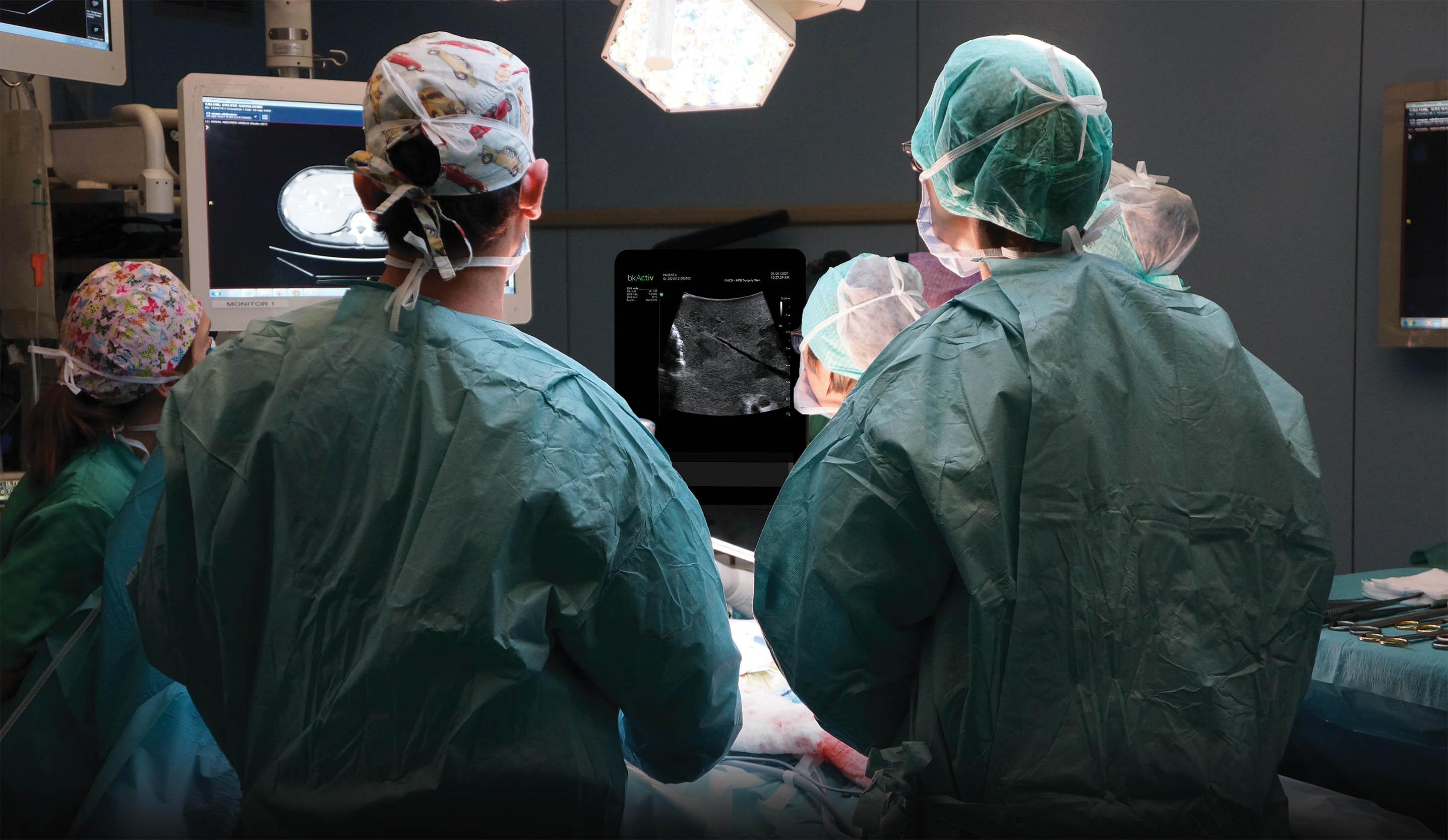 Like other recent GE acquisitions, the deal has the potential to accelerate GE’s growth and boost BK Medical’s engineering strength. GE brings to the table a decades-long history in ultrasound imaging innovation. From the early 1990s, the ultrasound unit has grown into a $3 billion segment of GE Healthcare. It now makes machines that utilize artificial intelligence, serve in hospitals around the world and help clinicians with tasks ranging from fetal ultrasound to complex heart surgery. GE’s new wireless, pocket-sized, handheld ultrasound, Vscan Air, allows clinicians to make quick decisions even in remote areas where no other medical technology is available.

“We are immensely proud of the organization and of the life-changing technology that we have built at BK Medical and look forward to our future as part of the GE Healthcare family,” said Brooks West, president and CEO of BK Medical. “Combining our expertise in intraoperative imaging and surgical navigation with GE Healthcare’s many strengths and global presence will accelerate our mission to change the standard of care in surgical interventions. Our mission to help surgeons make critical decisions using active imaging aligns well with GE Healthcare’s mission to help physicians make more informed decisions and improve patient outcomes, and we are eager to begin this new chapter.”

GE Healthcare’s ultrasound business is no stranger to strategic acquisitions. For example, when the division acquired Kretztechnik, an Austrian ultrasound pioneer that built the first 3D ultrasound machine, the deal helped GE Healthcare become a global player in women’s health ultrasound. The 3D and later 4D technology has altered how expectant parents around the world experience pregnancy.

This year, GE Healthcare also acquired Zionexa, a privately held French company developing and commercializing imaging agents that can help doctors diagnose certain cancers and other diseases. Like BK Medical, three-year-old startup Zionexa is nimble and innovative and operates in an area where GE sees the medical industry going — precision health. Zionexa’s expertise involves developing diagnostic agents known as radiopharmaceuticals, which are designed to bind to specific receptors inside the body. Radiopharmaceuticals help doctors obtain more information about, say, a tumor and the kind of medicine it might respond to. The deal is part of a patient-centered approach that complements GE’s diagnostics technology while giving Zionexa access to GE’s global profile and decades of experience.

In late 2020, GE Healthcare announced its acquisition of Prismatic Sensors, the first such deal for the business under Larry Culp, GE’s chairman and CEO. The Swedish company developed a new detector for computed tomography scanners that can vastly expand CT’s already impressive imaging abilities and lead to new ways to peer into the body. The technology could potentially help doctors determine whether lung nodules are malignant or benign, obtain details about plaque to accurately diagnose cardiovascular diseases, or image bone microstructure to understand risks to osteoporosis patients.

Unlike X-ray imaging, one of the earliest medical imaging technologies, which was introduced to the market more than a century ago, ultrasound is a relatively new method for visualizing the inside of the body. Ultrasound relies on sound waves rather than ionizing radiation. The first ultrasound machines appeared in the 1950s and 1960s, building on engineering breakthroughs such as the hydrophone and sonar, which allowed sailors to hunt for submarines early in the 20th century.

When high-frequency sound waves bounce off an object, its echoes can be analyzed to determine the shape of the obstacle. It doesn’t matter whether the object is a submarine or a fetus. It’s the same principle bats use to navigate and catch prey. Another bedrock ultrasound discovery is the piezoelectric effect, which allows certain crystals to convert mechanical energy, including acoustic waves, into electrical signals. These crystals now work inside ultrasound transducers, the wands that clinicians place on an expectant mothers’ bellies to look at the fetus.

The parties expect to close the deal in 2022, subject to review by the relevant regulatory authorities.