Nothing says summertime in Georgia like a dip in the old swimming hole. But near the town of Baxley, there’s one pool that’s not open to the public: the crystal-clear blue waters of the containment vessel bathing the Edwin Irby Hatch Power Plant’s nuclear reactor.

Although this is no place for a swim, the vessel must be monitored. In the past, during scheduled maintenance and refueling downtimes, multiple inspectors would clamber onto platforms that extended above the pool and plunge into the vessel cameras mounted on poles or tied to ropes. Using such handheld devices allowed them to get a close-up view of the welds in the reactor pressure vessel and also surfaces that had to be kept in perfect order. It worked, but it was a slow process and the inspectors had to protect themselves from radiation from the fuel below.

But now the team has a new member that’s happy to jump in. He’s called Stinger, the swimming robot, and allows nuclear plant personnel to go places no human could reach before.

Stinger, which is a bit taller than an average human, is a steerable unmanned underwater vehicle. He comes equipped with multidirectional, computer-controlled thrusters and a high-resolution color video camera. “Where Stinger’s camera and tools need to operate, a human could not survive in that location,” says Brandon Smith, the GE Hitachi Nuclear Energy mechanical engineer who led development of the machine. “That’s exactly why we need robotics to do this kind of work. There’s just no other way to do it and Stinger is built specifically to operate in that type of environment.”

The first-of-its-kind remote-operated vehicle is now being deployed to nuclear power plants across the U.S. as they go through scheduled refueling and inspection outages. It dives in the reactor pool for up to three weeks, using cameras to get a good look at material degradation. In addition to its camera technology, it also carries a high-pressure water nozzle, or hydrolaser, to clean metallic surfaces to ensure a good, clean look at the welds. 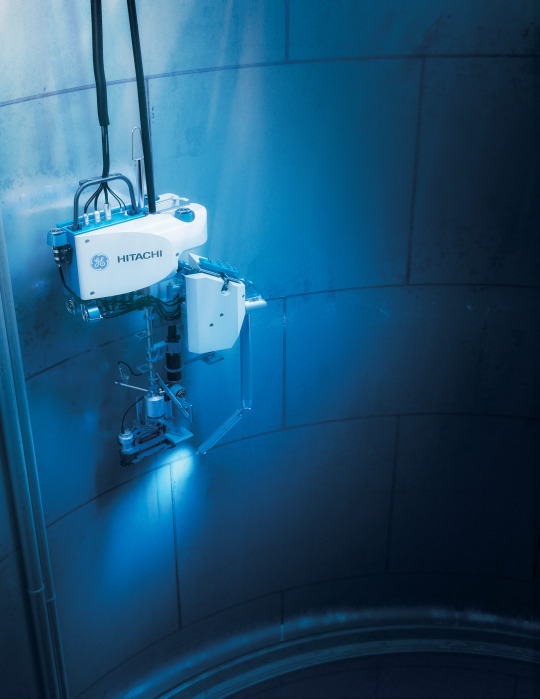 Smith and his team gave the robot a tungsten frock for protection and electronics that are less susceptible to high radiation levels. A single technician can operate it remotely from a tent hundreds of feet away from the vessel. The robot is connected through a power and control umbilical to the on-site operator and off-site, certified inspectors.

“The technician uses Stinger’s cameras to look for signs of degradation,” says Smith. “It’s really good at getting into constricted spaces and around tight corners to look for any sign that a component might fail—to catch something before it becomes a problem.”

Stinger is now successfully performing inspections throughout the U.S. nuclear industry. Smith says customers like it because it can work longer with fewer concerns about radiation exposure. It can also perform its job while other outage operations are going on since it doesn’t need inspectors to be suspended above the reactor pool. These benefits translate to shorter plant downtime and lower safety risks to employees.

“Our customers make money when their plants are producing power, so they’re always trying to reduce the length of necessary downtime,” says Smith. “They’re also always looking to reduce radiation exposure to workers. By moving Stinger in and workers away to a lower dose area, they are able to accomplish both goals.”