“Great leaders are made, not born.” We have all heard of this wisdom, but how many of us know what it takes to be a great leader? In a world that is so dynamic and where changes are constant, great leaders are a high demand in all sectors, including business.

In 2009, Susan Peters spoke to several journalists how she perceived the importance of great leadership in a corporation as massive as GE, especially after the economic meltdown in the U.S. “Even if the meltdown hadn’t occurred, there’s still so much going on in the world, in terms of technology-related developments and changing modes of communication, that we felt we needed to take another look at leadership development,“ said Peters.

The testament to GE’s belief that great companies — and great leaders — never stop evolving, is Crotonville. Crotonville is GE’s global leadership institute. Founded in 1956, Crotonville is the world’s first major corporate university. At Crotonville, GE seeks to define the state of the art of leadership, sharing ideas with the most influential thinkers in academia and business, and creating transformative learning experiences to inspire, connect and develop the GE leaders of today and tomorrow.

The 59-acre main campus in New York hosts thousands of GE employees and customers each year. Thousands more attend Crotonville leadership courses around the world. Often described as the epicenter of the GE culture, Crotonville is both a place and an idea.

“… the epicenter of the GE culture, Crotonville is both a place and an idea.”

The ILC as leadership-training courses

The Indonesia Learning Center (ILC) is a learning faculty intended to provide leadership-training courses both for internal employees and external customers. In addition to leadership training, ILC also intends to provide specific business technical trainings for its target. Crotonville’s curriculum and learning experience are brought to Indonesia and are delivered to the nation’s future talents via ILC. 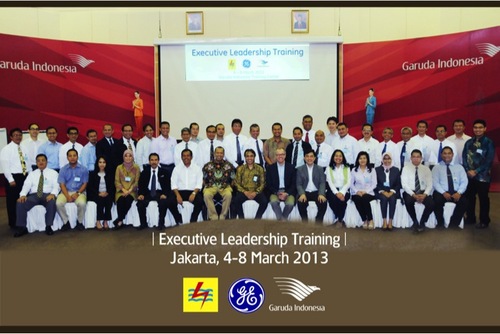 “It was seeded one year ago when we envisaged to nurture our 3 pillars of growth: deepening local presence, bringing in technology and developing future talents. The Indonesia Learning Center represents these pillars,” said Caecilia Adinoto, the HR Director of GE Indonesia.

The agreement with Pertamina, PLN & Garuda Indonesia was signed in 2013 and is currently in the stage of approval from GE Global. Although still young, the Indonesia Learning Center is here for a long commitment. GE aspires to shape the future of Indonesia by developing promising local talents.

Caecilia also said that, “Right now, we have more than 100 participants from GEpartner (Pertamina, PLN, Garuda), mostly are senior level management people, and we have provided 3 Leadership for Customers courses for them since the agreement was first signed. We are going to conduct the 4thcourse soon.”

The courses included topics such as “Leader as a Coach,” Creative Communications, Resolving conflicts and Innovation programs. These were all delivered by Crotonville’s faculty members who flew to Indonesia to conduct the intensive courses.

“ILC not onlytraining facility, but a center for GE’s leadership and technology trainings in Indonesia.”

GE believes Indonesia can be as preeminent as other developed countries in Asia such as Singapore, Japan and China, as long as the nation has promising talents and great leaders to bring the nation to a better state.

The Indonesia Learning Center embodies GE’s commitment to grow with Indonesia and its people. “In China, the GE Learning Center has become a model for other Asian countries to emulate its success in developing GE leaders as well GE customers’ leaders, and hence, in general we have been producing leaders of corporations around the world. We aspire to achieve similar success in Indonesia,” said Caecilia.

Leaders are made, not born. GE makes leaders in its Learning Centers all over the world.