Save Money, Light Better: Walmart Will Switch 100s of Stores to GE LEDs

Fifty years ago, physicist Nick Holonyak was tinkering with lasers in his GE lab when he discovered the world’s first light-emitting diode. “We knew what happened and that we had a powerful way of converting electric current directly into light,” Holonyak says. “We had the ultimate lamp.” His team called it “the Magic One.”

LEDs, which are much more efficient than ordinary light bulbs, are quickly becoming as common as a slice of bread, illuminating everything from TV sets and iPads to entire cities. LEDs made by GE will light up hundreds of new and remodeled Walmart stores over the next two years in the U.S., U.K, Asia, Mexico, Central America and Latin America.

The LEDs will help the stores reduce their energy needs for lighting by 40 percent on average. Walmart says that the savings will help it keep prices low. 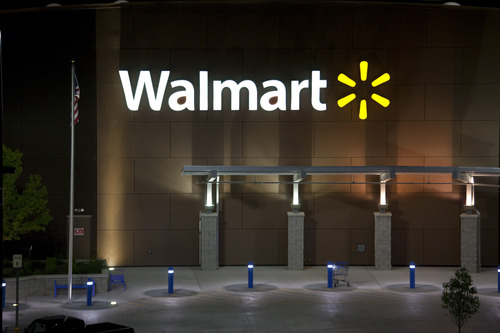 LEDs made by GE will soon light up hundreds of new and remodeled Walmart stores in the U.S., Europe, Asia and Latin America. Top image: The world’s first LED built by Nick Holonyak.

Walmart was one of the first retailers to bring LED lights to parking lots, signage and store appliances. In 2005, Walmart worked with GE on what may have been the first major rollout of an LED freezer case. “LEDs have become an integral part of our energy efficiency model for our stores and play a key role in achieving our overall sustainability goals,” said Doug McMillon, president and chief executive officer of Wal-Mart Stores, Inc. “We have worked to find and scale energy-efficient LED lighting solutions that are cost effective and high quality, and now working with GE, we’re paving the way to make this a mainstream solution for the retail industry.”

Walmart picked GE LEDs, in part, based on the results of a pilot program at the retailer’s first all-LED supercenter in South Euclid, Ohio. Starting in October last year, the retailer had studied lighting quality, efficiency and savings. “We’ve had a long and successful relationship with Walmart, increasing our environmental efforts together,” said Jeff Immelt, GE chairman and CEO.

Walmart will be using LED ceiling fixtures from GE’s ecomagination program. The total energy savings from LEDs could amount to 620 million kWh over the next decade – enough to power 5,600 U.S. homes over the same period.

Walmart will start installing the GE LEDs this month in stores in the U.K.

“When I went in, I didn’t realize all that we were going to do,” says LED inventor Holonyak, now 85 years old but still teaching engineering at the University of Illinois at Urbana-Champaign. “As far as I am concerned, the modern LED starts at GE.”