Borena Tiki, a schoolteacher who lives in the Oromia region of Ethiopia, has recently experienced something monumental: the opportunity to charge his cellphone any time he likes.

As of June 27, the tiny farming village Digo is now connected to an electricity “kiosk,” which supplies 62 homes in the village — out of 152 — a school, a health center, a meeting center and a church with 15 kilowatts from a hybrid solution combining solar panels, a diesel generator and batteries. The remaining 90 homes are in the process of being hooked up to the power system. When they are connected, the total number of Digo residents benefiting from the project will increase to more than 1,500. “It is not just light that this solar power has brought to our lives,” Tiki says. “Even though I own a cellphone and there is network coverage, I was not able to use the technology because there was no means to charge it. Now that is history — and I am connected.”

Antoine Desclos le Peley is program manager of GE Renewable Energy’s We Share the Power, the initiative that helped electrify Digo. The effort, which brings power to remote, off-grid areas, is funded by money GE Renewable Energy’s manufacturing sites save on their power bills by using electricity more efficiently. “We Share the Power is a ‘positive energy’ program,” Desclos le Peley says. “On the one side, it fosters the sharing of energy-saving practices amongst GE facilities; on the other side, it empowers people from remote villages to live more decent lives." 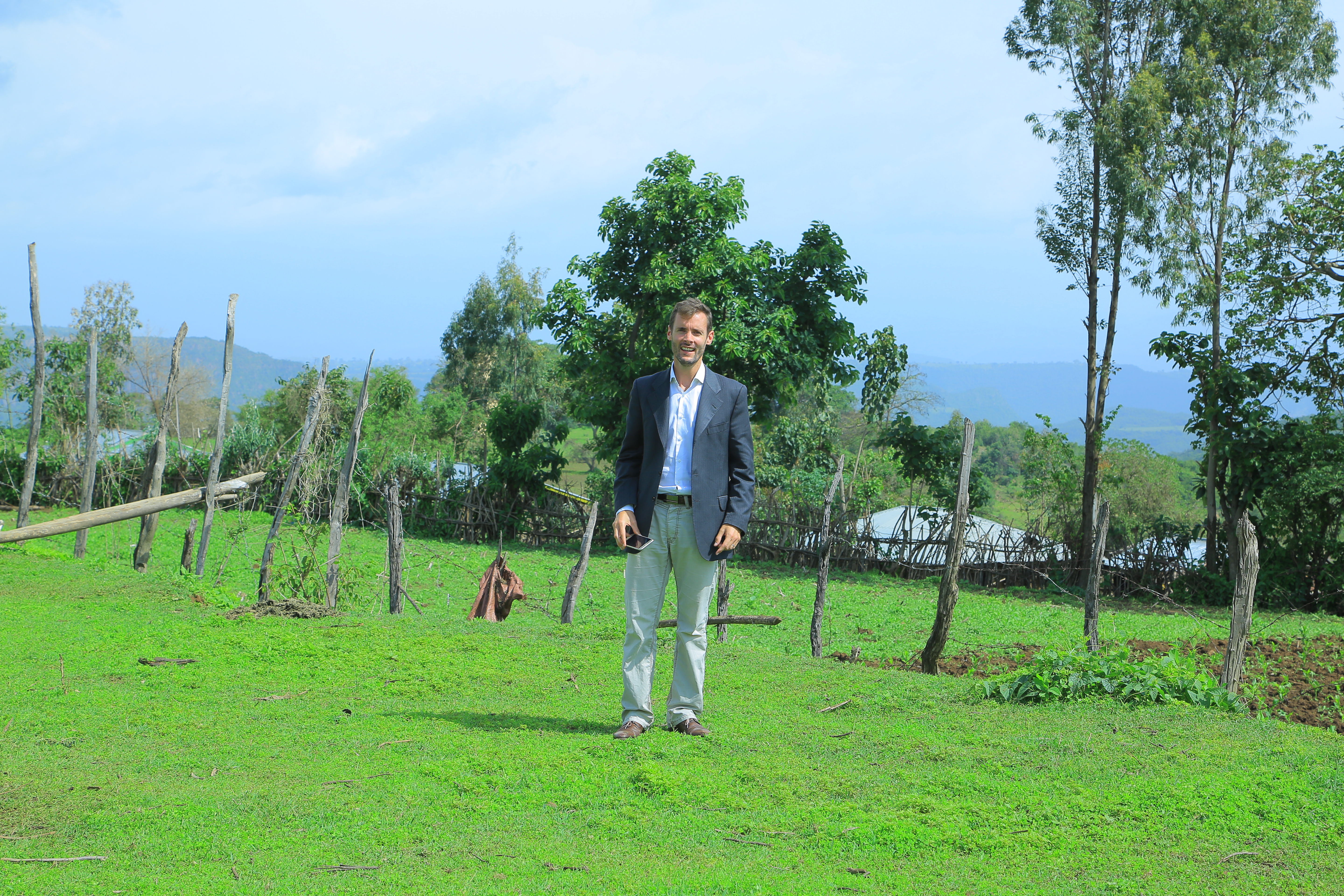 “We Share the Power is a ‘positive energy’ program,” Desclos le Peley says. “On the one side, it fosters the sharing of energy-saving practices amongst GE facilities; on the other side, it empowers people from remote villages to live more decent lives." Top and above images credit: GE Renewable Energy.

GE Renewable Energy launched the program six years ago after Desclos le Peley, who used to work as an internal auditor, witnessed many people in remote villages having to shut down their lives after sunset. He and Jérôme Pécresse, president and CEO of GE Renewable Energy, devised a plan to share energy savings from the GE unit’s engineering and manufacturing sites with people not connected to a grid. Since 2012, the program has saved more than $6 million.

Today, GE Renewable Energy has 13 teams around the world who are looking for energy-savings opportunities. But the program is also getting recognition outside the company. “What I really appreciate here is that we are making steps, maybe small steps, but this is the way it will help,” the French-Canadian astrophysicist Hubert Reeves said about We Share the Power. “We will not save the issues all at once, but we can move forward step by step.”

The inauguration in Digo, which is located 180 kilometers from the capital, Addis Ababa, was attended by all project partners, including GE Licensing, which co-funded the solution, GE Ethiopia, Ethiopia’s Ministry of Water, Irrigation and Electricity, the Oromia Region Energy bureau and the Ethiopian Electric Utility. “When we see all those smiles around us, we realize how precious access to energy is,” Desclos le Peley says.

In the Oromia region, only 22 percent of primary schools are connected to electricity, according to data from Ethiopia’s National Electrification Program - Implementation Road Map. In fact, 600 million people in sub-Saharan Africa lack access to power. A study from Lighting Africa, a joint International Finance Corporation and World Bank program, reports that “off-grid” populations on the continent need to walk 10 to 30 kilometers on average to buy small batteries or candles or find a place to charge their mobile phones. 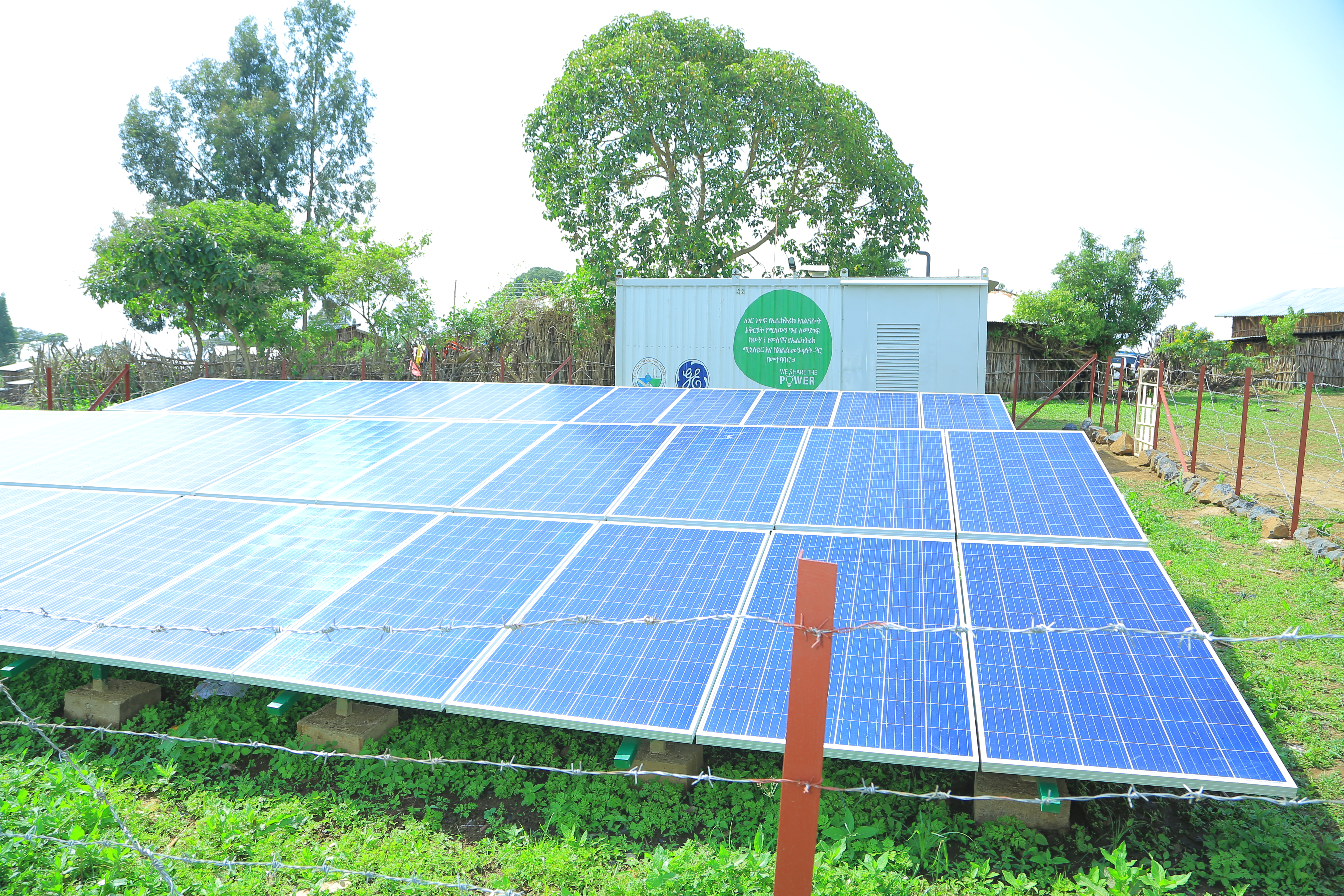 In Digo, the kiosk deploys a number of GE-patented technologies, including a power-management system and an integrated variable speed diesel generator. Image credit: GE Renewable Energy.

The kiosk — housed inside a compartment the size of a shipping container — combines solar panels, batteries and a diesel generator to provide reliable, sustainable power to a small grid. Digital Apps built on Predix, GE’s software platform for the Industrial Internet, monitor the solar production and battery charge, while the generator provides consistent backup for overcast days. Wires run from the kiosk hub to utility poles carrying the electricity to the village. “Technology is at the heart of these projects,” Desclos le Peley says. In Digo, the kiosk deploys a number of GE-patented technologies, including a power-management system and an integrated variable speed diesel generator. This kind of project enables GE to test those innovations in tough conditions, in order to propose robust and disruptive technologies to its customers, Desclos le Peley says.

The villagers pay for the access to electricity, which makes the project financially viable in the long run, Desclos le Peley says. “It’s already made an impact,” he says. “These people now have a life after 5 p.m. They can share moments with their families, prepare homework for tomorrow and have dinner without a small fire in their homes.”

Digo has already attracted new residents since it connected to the minigrid, says Desclos le Peley, and it might need a second kiosk at some point in the near future. For those living there, it will have a myriad of health, social and educational benefits.

As they move forward, Digo residents might choose to plug in their existing diesel-powered grain mill. By doing so, they would save 30 percent on their fuel bill. “The inhabitants of Digo have now all the power to decide what they want to do,” Desclos le Peley says.