The Power Broker: This GE Engineer Is Losing Sleep To Keep Your Lights On

When Thomas Edison switched on the first electrical grid in downtown Manhattan in 1882, the project was a great engineering feat as well as a brilliant marketing ploy. Starting small, his grid covered just a few blocks of New York City’s financial district serving some very influential customers. This first step unleashed a tsunami of innovation and growth the same way the Internet would a century later, but years later its evolution slowed to a crawl.

But things are changing again. Today, the grid is being upended by the popularity and falling costs of renewable energy fueled by ambitious emissions goals, an increase in the number of electric vehicles, and factors like the industrial internet of things. But these changes present a new set of challenges. Solar and wind power depend on the weather, and growing demand for electric vehicles puts strain and volatility on the grid, for example. As a result, utilities are adding smart analytics, switches and digital devices to modernize their grids, but they struggle with making sure that all these technologies can work together and understand each other. “The grid is the smartest and most complex machine that humans ever built,” says Jamshid Sharif-Askary, chief architect at GE Renewable Energy’s Grid Solutions. “But we are pushing it beyond its limits.”

Understanding and solving this problem isn't just Sharif-Askary's job — it's his obsession. “I want to bring clarity into the system and see patterns in the chaos,” he says. “That’s what keeps me up at night. Because, ultimately, nobody gives a damn what technology we have on the grid, it’s a mean to the end. People want to come home and switch their lights on. That’s the bottom line.” 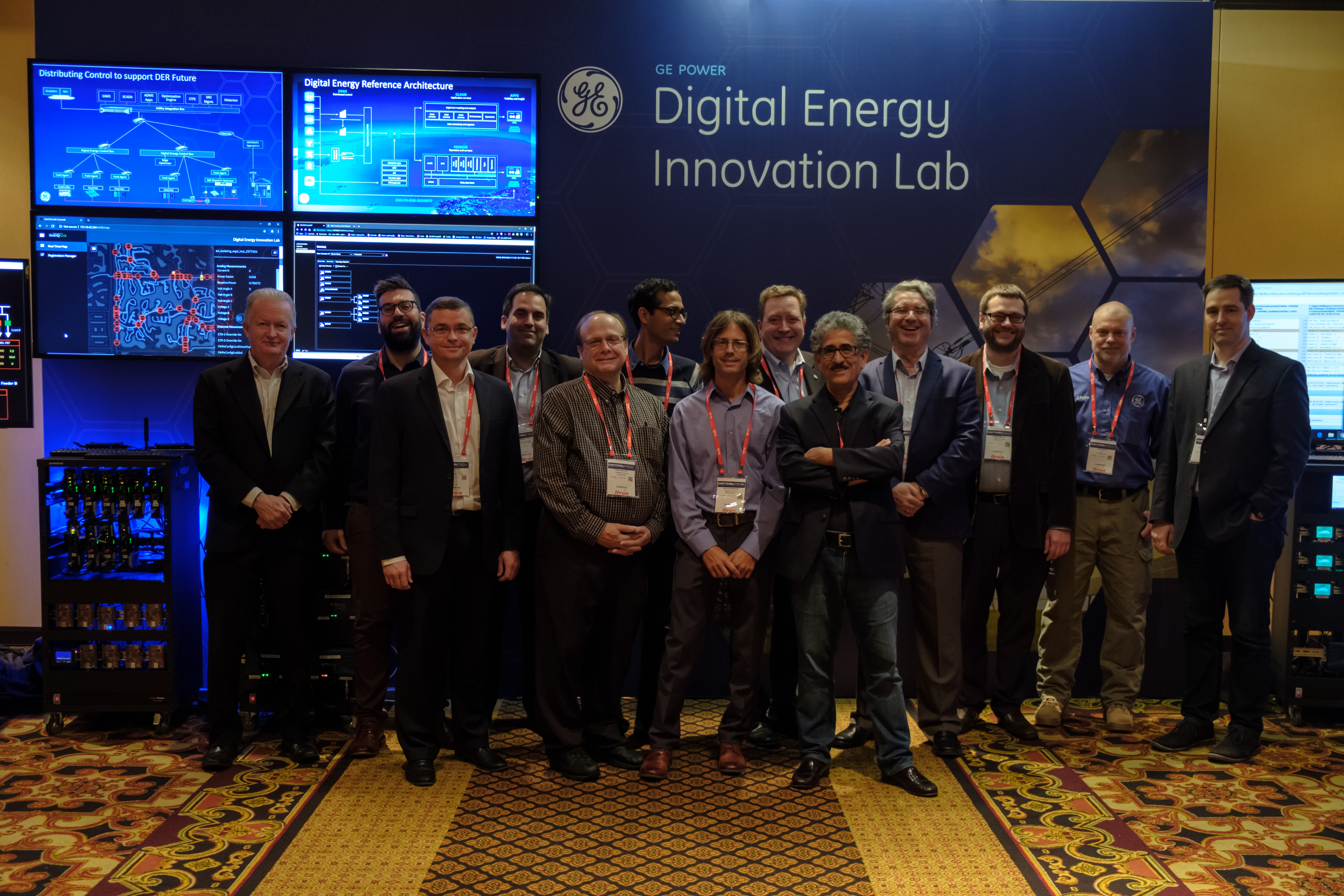 In many ways, Sharif-Askary is an unlikely hero in this story. After graduating from the University of Tehran with a bachelor’s degree in quantum physics in the 1970s, he joined a local utility and saw his supervisor get electrocuted inside a substation. “He put his hand on a switch, fell to the ground and died,” he recalls. “After that, I hated electricity. I was scared of it.”

He moved to the United States, enrolling at the Florida Institute of Technology and focusing on distributed computing, among other things. But power still attracted him and so he got a job with the control systems division of the Harris Corporation. It was there, during a work trip to Lapland in northern Finland, that he had his epiphany. Plodding to a remote substation with a pair of snowshoes strapped to his feet, the possibility of reliable power supply in a snowbound wilderness pushed him to start developing software that fortifies the grid’s resiliency. “I wanted to build a federated control system with inherent disaster prevention and recovery that helps keep the lights on, when the system is under stress and one of the sites are out,” he says.

Nearly four decades later, Sharif-Askary’s mission remains the same. But the grid's growing complexity has given him a greater sense of urgency. He realized he wanted — needed — to do more than write software. So, three years ago he went to his boss with a proposal: He’d build an internal "startup" seeking to create “an innovative digital grid infrastructure” that GE and power utilities could use to incubate and test their technology ideas to reimagine the grid. However, his boss just gave him the key to an empty office. So, without any funding Sharif-Askary rallied a small, like-minded team and began scraping together borrowed equipment. Initially, they attached an old computer running grid software to a handful of instruments, including an immersion water heater he bought at Walgreens to simulate heat coming from a transformer. “When I took new people in, I warned them: You are going to laugh,” he says.

Today that startup, now officially called the Digital Energy Innovation Lab, includes the latest grid technology and occupies several rooms at a GE office building in Melbourne, Florida. Its flagship offering, the Information Hub for the digital grid, “has become a one-stop shop where customers work with GE experts on their digital transformation plans, where realistic solutions are developed to meet their most critical need,” says Byron Flynn, senior technical sales manager at GE Grid Solutions.

The lab is now filled with millions of dollars’ worth of equipment and software funded entirely by projects Sharif-Askary and his team developed with a number of U.S. and European utilities. The lab contains traditional large computers running back-office software. But it also includes racks of tiny credit card-sized computers aptly called edge computers. These ruggedized devices can communicate wirelessly with each other and simulate microgrids, PV systems, electric vehicles, storage batteries and other power technology. They can also run optimization algorithms as part of a distributed energy resource management system (DERMS), a software package that allows distributors to forecast, dispatch and control energy resources. “What we have built is really a technology motherboard that allows utilities to plug together new technology with their legacy systems from various manufacturers like Lego blocks, and see how they all work together,” Sharif-Askary says. For example, grid operators can use this system to optimize grid efficiency and reliability as an increasing amount of neighborhood rooftop solar panels and electric vehicles come online. 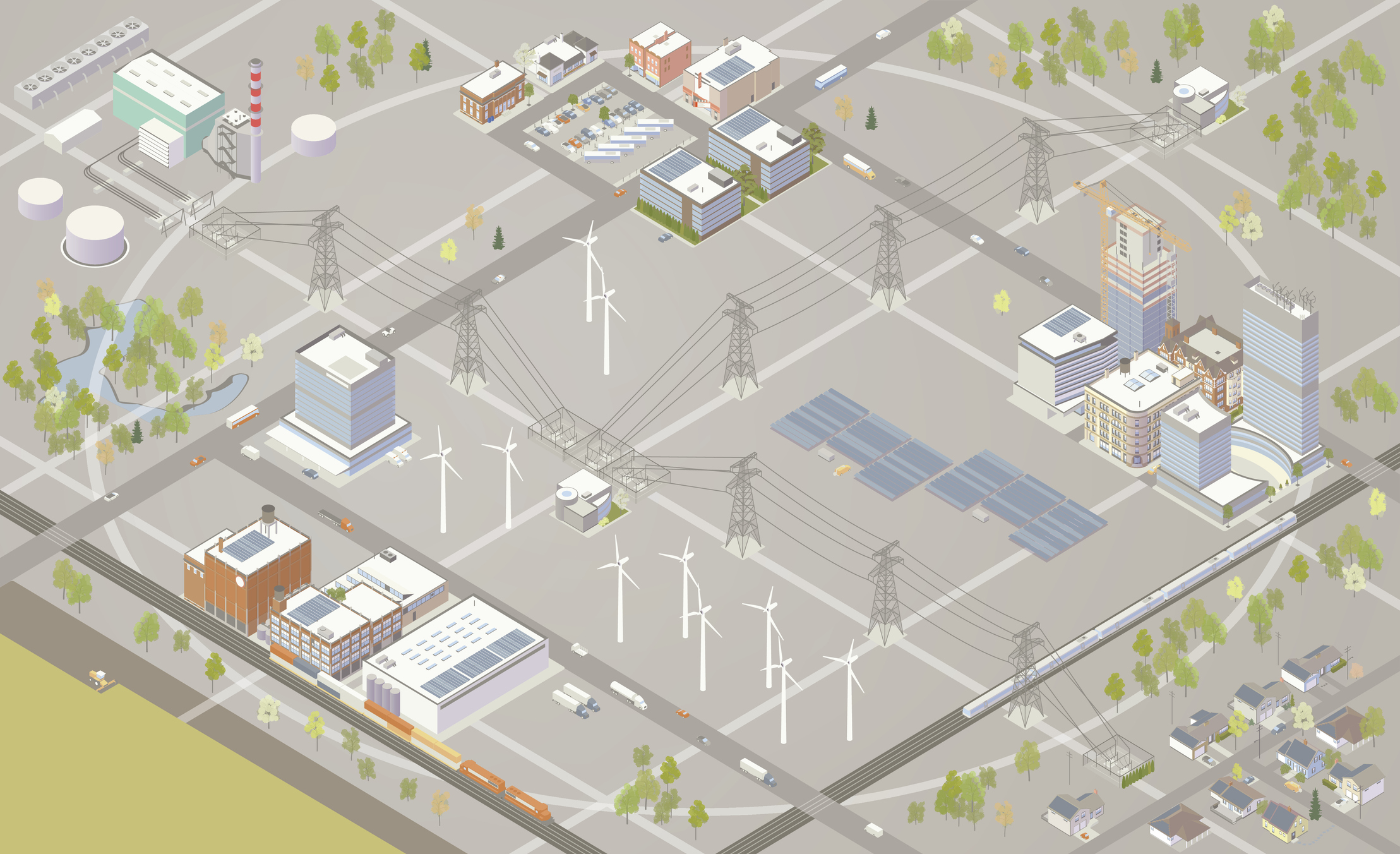 “The grid is the smartest and most complex machine that humans ever built,” Sharif-Askary says. “But we are pushing it beyond its limits.” Image credit: Getty Images.

The Information Hub and the edge computers also help GE and customers figure out where to best analyze data, optimize systems and deploy controls. “The world where you have one team sitting at the center using a monolithic system to control the whole network is gone,” Sharif-Askary says. “Today it’s all about distributed decision-making.”

That means operators now utilize a “system of systems” to automatically instruct transformers, switches and other devices where to best send their information. Many industries store data in the cloud, but that approach can be too slow for an outage affecting parts of the grid hundreds of miles away from the storage. That’s why utilities started bringing decision-making closer to their assets and installing edge computing directly on the grid. This solution allows equipment to exchange information in near real time, and decide what information needs to be communicated with higher-level systems. Furthermore, these edge computers also include sophisticated cybersecurity protocols to help better protect the data and grid devices.

Sharif-Askary says he is currently working with a utility with 6 million customers, including many with solar panels on their homes and EVs in their garages. “You cannot make one decision based on one factor anymore,” he says. “You are controlling an environment where everything is interlinked. We are helping utilities build a system that’s smart, that in a time of stress, like during a hurricane, old and new machines of different makes can talk the same language, take partial controls and tell each other what is best to do.”

In February, Sharif-Askary, Flynn and their teams brought a scaled-down version of the Information Hub to New Orleans to DistribuTECH, one of the world’s largest power distribution and transmission conferences. He ran three full days of use-case examples for a succession of engineers and executives from large U.S. and international utilities. Among the first through the door on day one was Gregg Borachok, a manager from Duke Energy’s Advanced Distribution Management Systems division. Duke, one of America’s largest power companies, is pushing heavily into renewables and digitizing the grid. “It’s a cliche to say that Thomas Edison would recognize the grid today,” Rob Caldwell, senior vice president at Duke and president of Duke Energy Renewables and Distributed Energy Technology, told GE Reports. “It looks the same, it’s still poles and wires, but the functionality is significantly different. We’ve got control equipment where we can monitor the voltage much more finely than we ever could. We basically have a communication network as well.”

Duke is leading a coalition of companies, including GE, that are developing an interoperability framework, the Open Field Message Bus (OpenFMB). OpenFMB technologies run in these edge computers to ensure that devices on the grid will speak the same digital language to communicate with each other to quickly enable advanced grid analytics. Borachok says new technology allows Duke engineers to predict what happens to solar production when cloud cover moves in, or to reroute power quickly and efficiently when a tree falls on a line and takes it out of service, for example. It also facilitates developing power apps that give customers real-time updates when their power will come back on. This abundance of new solutions creates a problem of its own, however. “I’ve got tons of more devices out there,” he says. “How does it all work together? That’s the beauty of these labs. Instead of going to buy a bunch of hardware, putting it out in the field and finding out that it’s not exactly right, I can [run the simulation] in the lab.”

Sharif-Askary agrees: “It’s not about the technology, it’s about the outcome. That’s the whole thing.”