In The Pink: Breast Density & Its Implications on Cancer Screening

Breast cancer is the most commonly diagnosed cancer among Malaysian women. However, there is little awareness on breast tissue density and its implications on breast cancer. Breast density potentially increases a woman’s risk for breast cancer as it poses more difficulties in identifying the existence of cancer on a mammogram. Breast density is determined by factors such as hormones, age and ethnicity – where Asian women have been found to have typically denser breasts. It is imperative that Malaysian women are well-versed on the risks of dense breast tissue and its correlations to breast cancer.
Breast tissue consists of fatty and fibro glandular tissue. Breasts are classified as “dense” when more than 50% of a breast consists of fibro glandular tissue. A study published in the New England Journal of Medicine, indicated mammography sensitivity is reduced by 36 to 38% in women with dense breasts, as density masks the appearance of tumors.Moreover, the risk of developing breast cancer is 4 to 6 timesgreater in women with a higher breast tissue density versus those with minimal or no dense tissue in their breasts.A study conducted by University Malaya Medical Centre suggests that there was a significant difference between the breast density of Malaysian women, where Chinese women have the highest risk of developing breast cancer with 2.4 times breast density compared to the Malays (1.02 times) and Indians (0.4 times).

Breast density cannot be determined by palpation or by the appearance of the breasts on exam – it can only be determined by evaluating a mammogram. A radiologist can perform a breast density assessment at the time of a mammographic interpretation. Since mammography has limited visibility in women with dense breast tissue, screening dense breasts with ultrasound, in addition to mammography, may improve the likelihood of detecting cancer.

According to a study conducted on American women by GE Healthcare, 47% of respondents did not know if they had dense breasts and 89% who have dense breasts did not know their breast density. The lack of accurate methods to determine breast cancer in women has led GE Healthcare to fund research in developing alternative evaluation diagnosis technologies; such as those that can examine even smaller tumors. 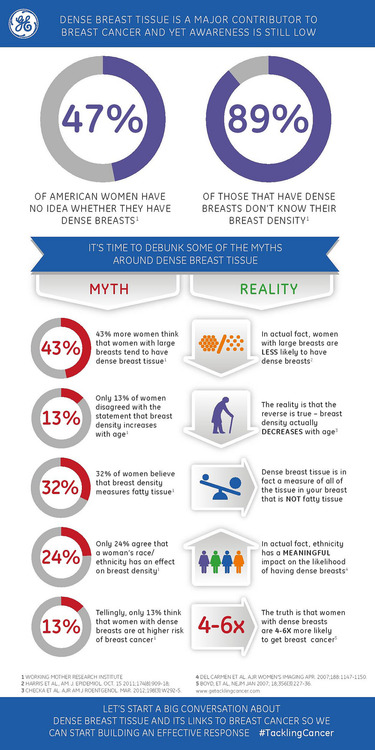 It is important for all Malaysian women to understand the potential risks associated with having dense breasts and its implications on cancer screening. Women are advised to proactively conduct self-breast examination techniques and attend mammography screenings on a regular basis. Public awareness and knowledge on breast density may potentially spur early diagnosis and treatment of breast cancer, which will further reduce the mortality rate of breast cancer among women.