Not Your Average Fridge Magnet: These High-Tech Magnets Will Keep Your Butter (and Beer) Cold

Researchers working in GE labs have used a special magnetic material to achieve temperatures cold enough to freeze water. The breakthrough system, which is projected to be 20 percent more efficient than current refrigeration technology, could be inside your fridge by the end of the decade.

The system is using a water-based fluid flowing through a series of magnets to transfer heat, rather than a chemical refrigerant and a compressor. This significantly lowers any harm to the environment and makes the recycling of old refrigerators simpler.

“This is a big deal,” says Venkat Venkatakrishnan, a leader of the research team. “We are on the cusp of the next refrigeration revolution.”

The new technology is taking advantage of a century-old discovery called the magnetocaloric effect. In the 1880s, German physicist Emil Warburg observed that certain metals would heat up near magnets and cool down when taken away.

Thomas Edison toyed with the concept of building a magnetocaloric heat pump, a device that takes thermal energy from a cold space like the refrigerator and moves it into a hotter environment, like the kitchen. But he could not find any practical materials for pulling it off.

When GE launched the world’s first commercial electric refrigerator in 1927, it used a compressor for removing heat from the food storage. Most modern refrigerators and air conditioners still use the same technology today.

Rotating magnets change the magnetic field back and forth and pump water-based cooling fluid between the beer can (the cold side) to the hot side.

But scientists have never stopped being intrigued by the magnetocaloric effect. In the 1980s, for example, a team at the Los Alamos National Laboratory in New Mexico used expensive superconducting magnets to achieve a few degrees of refrigeration. The New York Times noted at the time that the method was “more likely to be applied to specialized tasks, such as infrared observation from space, than to home refrigeration.”

GE teams in the U.S. and in Germany picked up the problem again 10 years ago. They decided to build a cascade from special magnetic materials, where each step could lower the temperature just slightly. “We are taking a chunk of heat and pushing it down the ladder, from the cold insides of the refrigerator to the warm room outside” Venkatakrishnan says.

It took them five years to achieve cooling of just 2 degrees Fahrenheit. Not much, but enough to show that the idea was working. “We started with a huge machine that didn’t do very much, but we’ve moved to a prototype that’s about the size of a cart,” says Michael Benedict, design engineer at GE Appliances. “The goal is to get this thing down to a size where you can put it in the refrigerator.”

That goal got closer when the team’s materials scientists developed a new type of nickel-manganese alloys for magnets that could function at room temperatures. Design engineers arranged the magnets in a series of 50 cooling stages. Today they are capable of reducing temperature by 80 degrees. “We are focusing on magnetic refrigeration as a potential replacement for all the refrigeration technologies currently in use,” Benedict says. 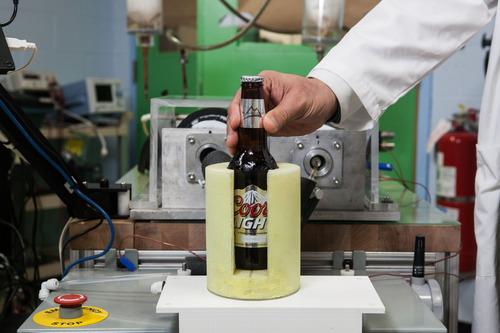 Time to test the results.

The GE team has run demonstrations for experts from the Department of Energy, attended by staffers from the White House and the EPA. “Nobody in the world has done this type of multi-stage cooling,” Venkatakrishnan says. “We believe we are the first people who shrunk it enough so that it can be transported and shown. We were also the first to go below freezing with the stages.”

The team is now working to achieve a 100-degree drop in temperature at low power. “We’ve spent the last 100 years to make the current refrigeration technology more efficient,” Venkatakrishnan says. “Now we are working on technology for the next 100 years.”