In It For The Long Haul: Powerful Engine That Helped Open The World Passes 100 Million Hours In Flight

Big things often come from humble beginnings. Take the GE90, a jet engine so powerful it started a decades-long revolution in passenger aviation that is still ongoing.

The engine allowed large widebody jets with just two engines, instead of the typical four, to fly people between continents, lowering the cost of fuel and maintenance for airlines along the way. That, in turn, started a trend that ultimately spelled the end of service for the iconic Queen of the Sky — the Boeing 747 — and even the Airbus A380 double-decker.

But all of that was still far in the future on February 2, 1995, when a group of aviation executives and government regulators gathered in a crowded conference room at GE Aviation’s Ohio headquarters. On the table was a type certificate for the GE90 — a document declaring that the engine was officially airworthy. “It had been years of blood, sweat and tears to get to this point,” remembers Phillip Rambo, who was present in the room as a senior engineer on the GE90 program. Tension turned to relief as officials from the Federal Aviation Administration (FAA) leaned forward and signed the documents.

But there was no time for Champagne. “We put the certificate straight on the fax machine and sent it to Seattle,” says Rambo, now a chief consulting engineer with GE Aviation. A team of technicians standing by in the Pacific Northwest printed an aircraft data plate for a twin-engine Boeing 777 sitting on the runway. That plate gave the 777 the all-clear to fly. “It made its first test flight with the GE90 engine that same afternoon,” Rambo says.

The rest, as they say, is history. The GE90 went on to reinvent the logistics, economics and aesthetics of jet travel, enabling an era of twin-engine airplanes and smooth, cost-efficient long-haul flights. In fact, the engine has just surpassed 100 million flight hours — that’s 11,500 years! — and in November will mark another milestone: 25 years since it entered service under the wings of the Boeing 777 family of jets.

Over the last quarter-century, more than 2,800 GE90 engines have rolled off the production line. They’ve covered approximately 55.7 billion miles, roughly the same distance as 300 round trips to the sun. Some estimated 2.5 billion passengers have caught a ride on GE90-powered Boeing 777 airplanes, and the jets have hauled approximately 143 billion pounds of freight.

It’s perhaps no wonder that the GE90 remains the bellwether against which other modern jet engines are measured. It reigned supreme as the world’s most powerful aircraft engine until another GE Aviation giant, the GE9X, dethroned it last year. And much of the cutting-edge technology now standard in modern jet engines — such as lightweight, composite fan blades and 3D-printed parts — all began in the GE90 family. “It all started with this engine,” says Jim Elliot, a principal engineer at GE. “It has exceeded all expectations and become the envy of the industry.” 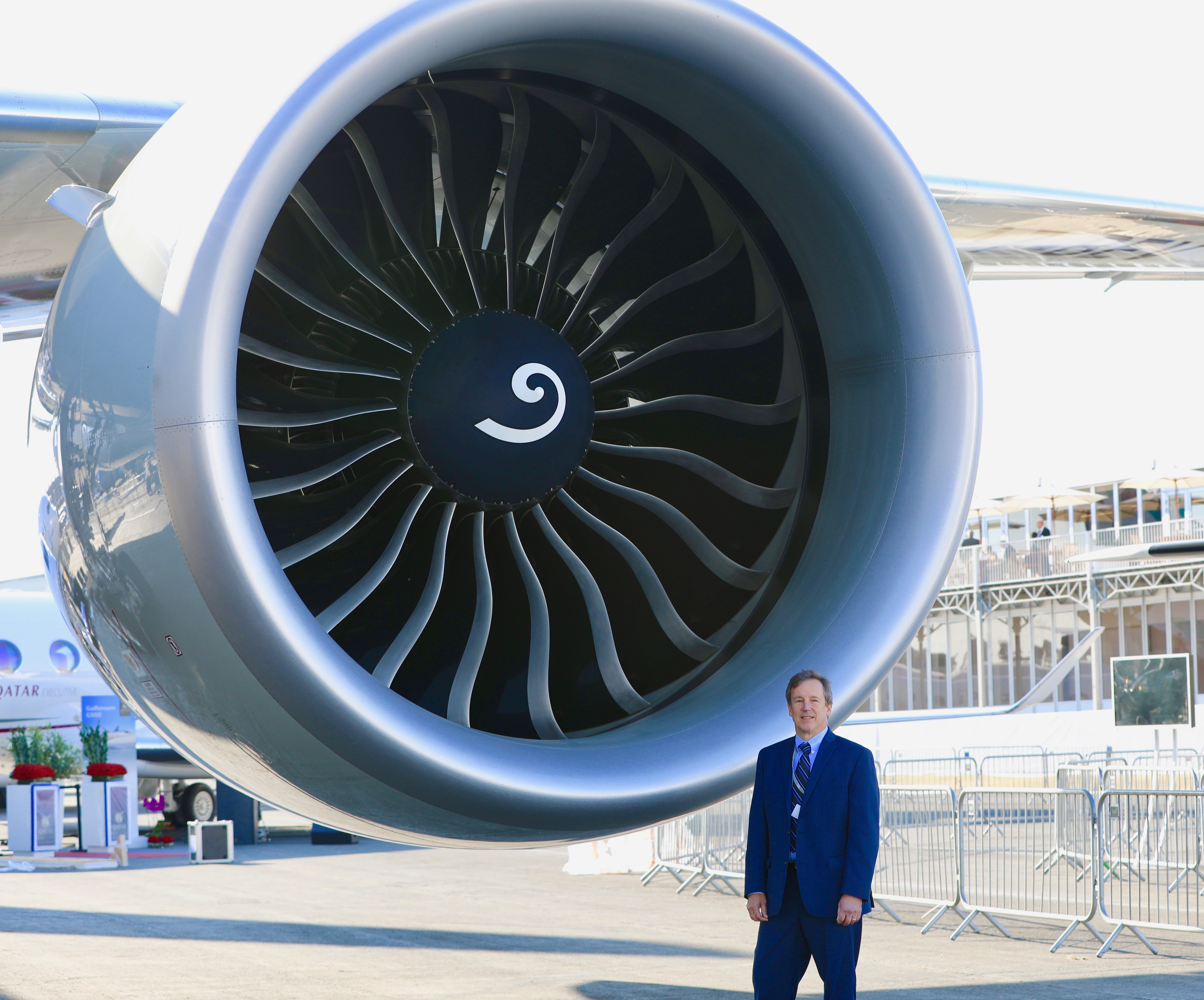 British Airways was the first airline to fit its Boeing 777 fleet with the GE90 in 1995 and, in the years since, many factors have allowed the engine to revolutionize aviation. But its sheer thrust stands out. The GE90 held the record as the world’s most powerful jet engine for 17 years, clocking 127,900 pounds of sustained thrust in 2002 — on par with the solid-fuel rockets used by NASA in the 1960s. That next-level, reliable power boosted the extended operations of a Boeing 777-300ER to around 345 minutes, meaning the airplane can, if needed, fly for nearly six hours on a single engine. “That really opened up the southern hemisphere and stretched the legs of twin-engine operations,” Rambo says.

Flying on just two mighty engines was not a matter of showing off. It allowed the 777-300ER to enjoy considerable operating-cost advantages over its four-engine rivals on a per-seat-hour basis. It also improved the economics for freight as well as passengers, explains Rambo. (GE Capital Aviation Services is currently building a cargo version of the 777-300ER called the Big Twin.)

The GE90 became a symbol of progress as well as power. The technologies developed for the engine have served as the springboard for engines like the GEnx, the Dreamliner and the GE9X, developed for Boeing’s brand-new 777X jet. Rambo says the recent successful test flight of the Boeing 777X may have felt like the dawning of a new era — but it was really the continuation of a dynasty. That’s because the GE9X contains fan blades made from light and tough carbon fiber composites, rather than metal, and several 3D-printed parts. “Those both started with the GE90,” he says.

The design of the carbon composite blade was well ahead of its time. Rambo says the blade manufactured for the base engine in 1990 was “pretty straight.” But over the years, the material allowed it to take on an increasingly flared shape that more efficiently captured and accelerated airflow, giving it an aesthetic, as well as aerodynamic, value. New York’s Museum of Modern Art included the blade in its permanent collection, Rambo says, and: “I also had one in my living room.”

There were other breakthroughs. The new GE9X relies on a host of parts made via 3D printing, also known as additive manufacturing. But the GE90 was the first jet engine to hold a 3D-printed part, a temperature sensor, back in 2015.

Jonathan Clarke, who has worked on the GE90 program for eight years, says it’s important to remember the GE9X’s heritage and origins. “I’m just a newbie here compared to Phil and Jim,” he says. “But I know that continuation is absolutely key.”