When Bill Boeing opened his Seattle factory in 1916, his first product was a seaplane made from wood and canvas called Bluebill. That biplane could seat a pair of flyers and cover 320 miles. Boeing built just two of them. Today, Boeing wide-body planes such as the 777  jet seat as many as 450 passengers and carry them as far as 9,000 miles for as long as 17 hours without stopping on the world's longest flight.

Boeing is celebrating its centennial at the EAA AirVentures fly-in this week in Oshkosh, Wisconsin. The company brought many planes to the airshow to illustrate its history, from “war birds” such as the Boeing B-29 bomber that flew during World War II to the latest jets, including the upgraded 747-8 jumbo. In many ways, the Boeing planes also tell GE’s aviation story. 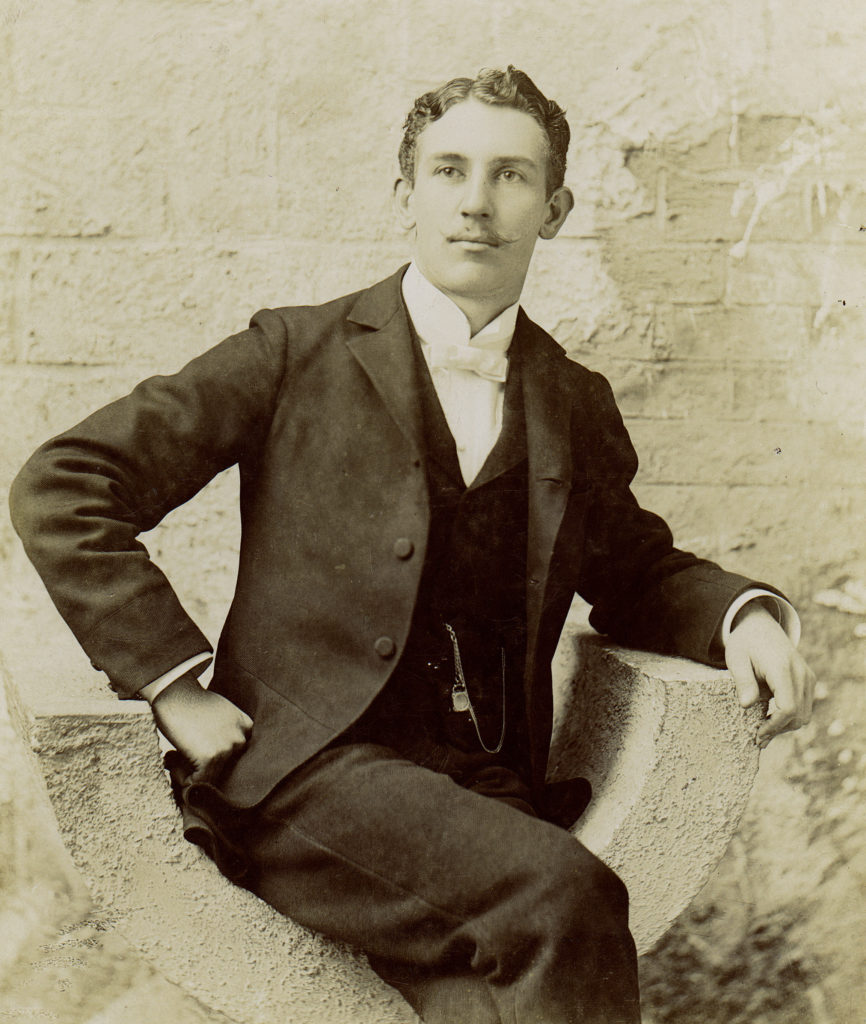 Above: GE's Sanford Moss converted his patented gas turbine designed generate electricity into a turbosupercharger that allowed airplane engines to retain their power at high altitude. Today, GE Aviation is a $24 billion business (2015 revenues). Image credit: Museum of Innovation and Science Schenectady Top: FiFi visited Oshkosh this week. Boeing B-29 like this one used GE turbosuperchargers inside their engines.

As its name implies, GE started out as an electricity company building power plants and rolling out the electric grid across the United States and Europe. The early generators mostly used steam, but in 1903, a young engineer named Sanford Moss hit on an idea to produce power with a gas turbine.

Moss, who had just received a doctorate in gas turbine research from Cornell University, joined GE and started building a revolutionary radial gas compressor. It used centrifugal force— the same force pushing riders up into the air on a swing carousel—to squeeze the air before it entered the gas turbine. 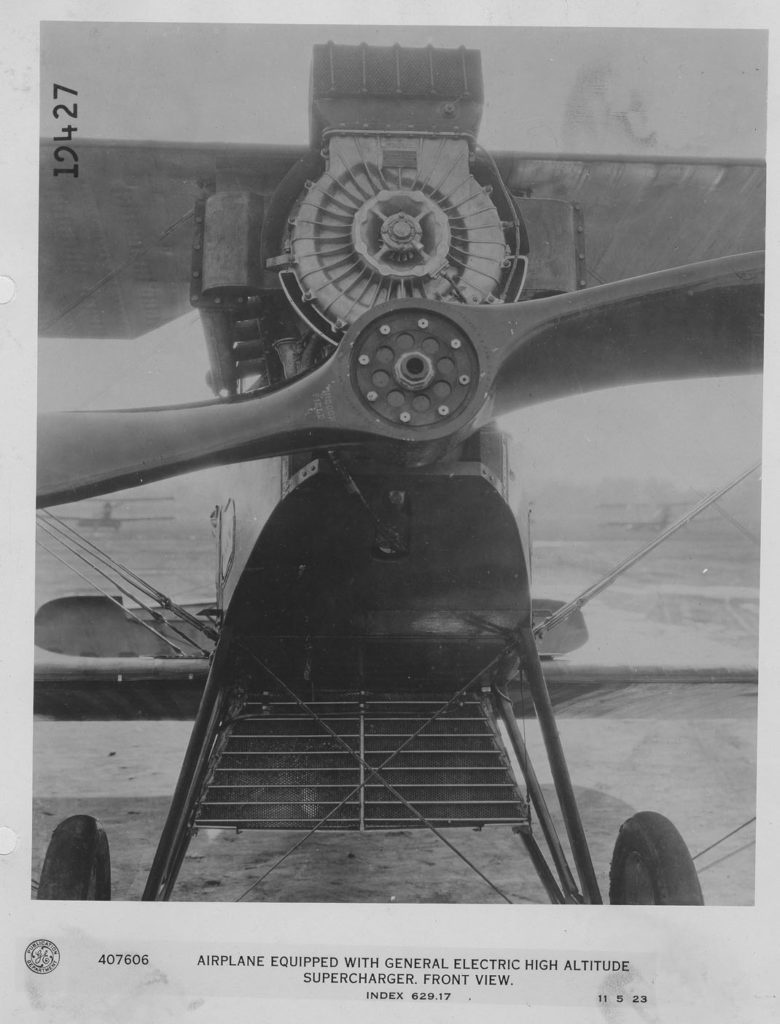 Moss’ early experiments failed; his machine guzzled too much fuel and produced too little power. He didn’t know it yet, but his patented technology pointed the way to the jet engine before the Wright Brothers even took off.

That’s because in November 1917—at the peak of World War I— then GE President E.W. Rice received a note from the National Advisory Committee for Aeronautics, the predecessor of NASA, asking about Moss. WWI was the first conflict that involved planes, and the agency wanted the engineer to improve the performance of the Liberty aircraft engine, the workhorse of the American airborne fleet. The engine was rated 354 horsepower at sea level, but its output dropped by half in thin air at high altitudes. Moss believed that he could use his radial compressor to squeeze the air before it entered the engine, make it denser, “turbosupercharge” the engine and recover its lost power. 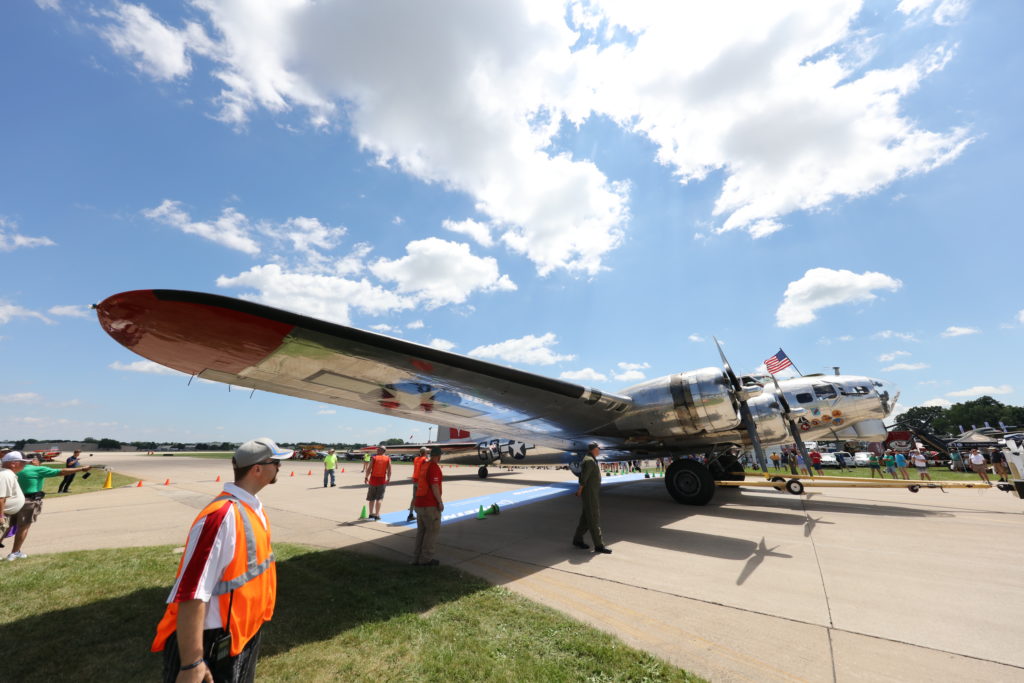 GE received a large order from the Army Air Corps to build turbosuperchargers for Boeing B-17 bombers fighting in World War II. This B-17 arrived in Oshkosh on Monday.

The idea worked, and the first Le Pere biplane powered by a turbosupercharged Liberty engine took off on July 12, 1919. “The General Electric superchargers thus far constructed have been designed to give sea-level absolute pressure at an altitude of 18,000 feet, which involves a compressor that doubles the absolute pressure of the air,” Moss said. He later joined the National Aviation Hall of Fame.

The technology quickly spread, and that’s where Boeing comes in. GE received a large order from the Army Air Corps to build turbosuperchargers for Boeing B-17 and B-29 bombers fighting in World War II. The company opened a dedicated Supercharger Department at Lynn, Massachusetts. 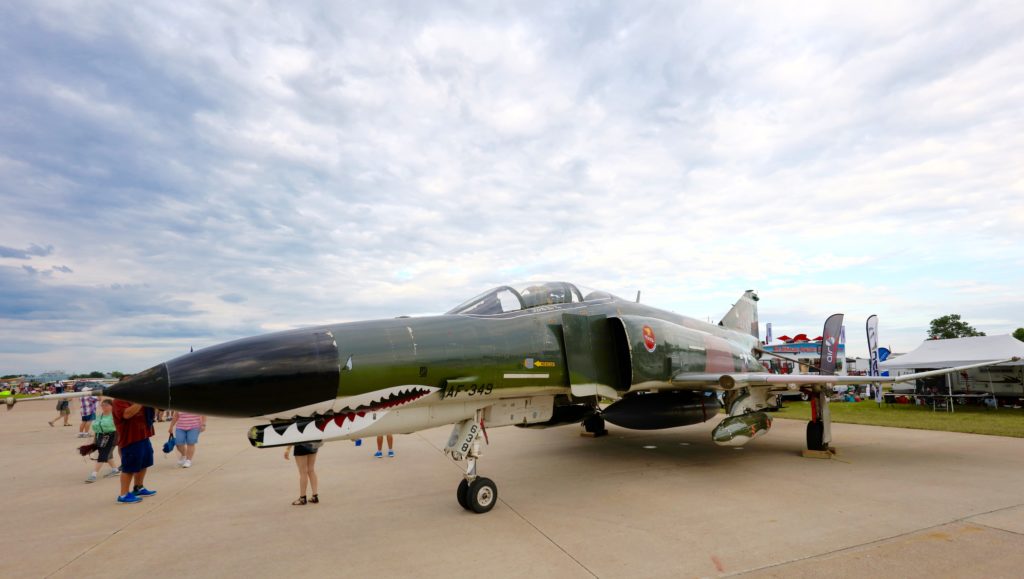 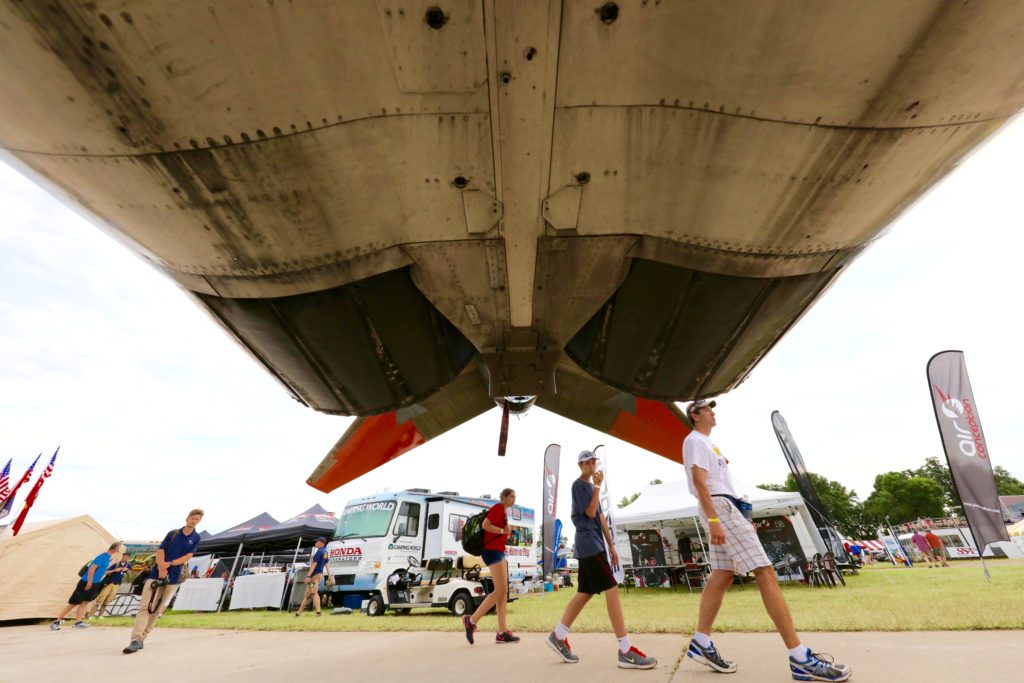 The thrusters of the J-79 engines on the Phantom F-4. McDonald-Douglass in now part of Boeing.

But this is just the beginning of the story. By 1940 the war was raging in Europe and the U.S. government realized it needed a new engine to power its planes. Because of it success with the turbosupercharger, it asked GE to bring into production a jet engine design developed in England by Sir Frank Whittle. (He was knighted for his feat.)

Starting in 1941, a group of GE engineers at Lynn called the Hush Hush Boys designed new parts for the engine, redesigned others and delivered a top-secret working prototype called I-A. On Oct. 1, 1942, the first American jet plane, the Bell XP-59A, took off from Lake Muroc in California for a short flight. The jet age in the U.S. had begun.

The first GE jet engines used a radial—also called centrifugal—turbine to compress air, similar to the design that Moss developed for his turbosuperchargers. But GE engineers started working on an engine with an axial turbine that pushed air through the engine along its axis. 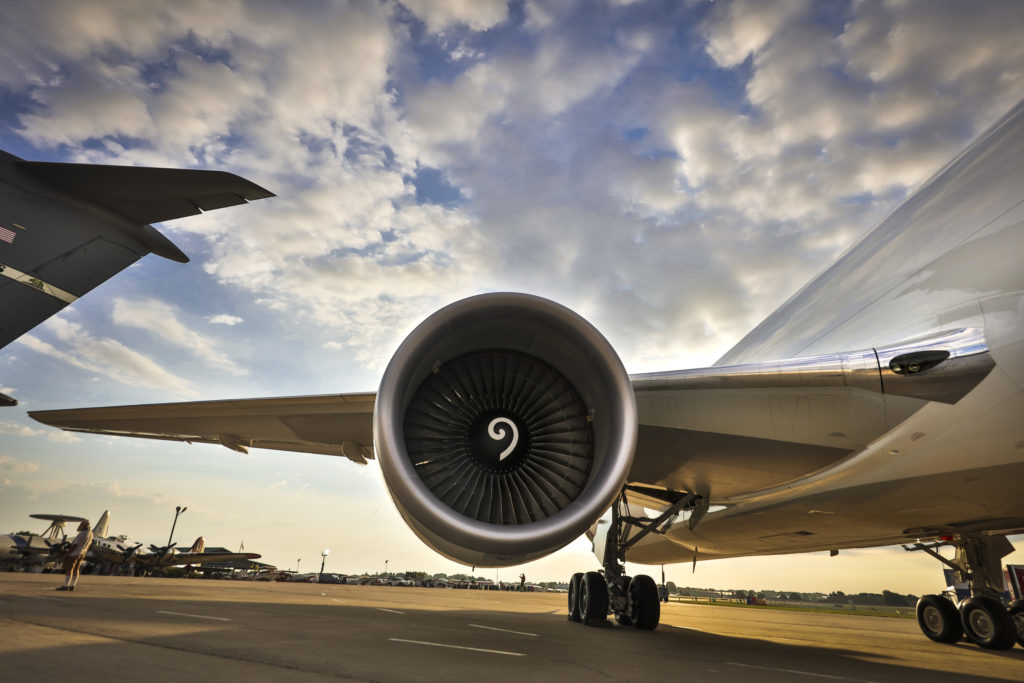 This cargo Boeing 767 uses a pair of GE CF6 engines. It arrived in Oshkosh on Wednesday.

In 1948, GE hired German war refugee and aviation pioneer Gerhard Neumann, who quickly went to work on improving the jet engine. He came up with a revolutionary innovation called the variable stator. It allowed pilots to change the pressure inside the turbine and make planes routinely fly faster than the speed of sound. When GE started testing the first jet engine with Neumann’s variable stator, engineers thought that their instruments were malfunctioning because of the amount of power it produced. The J79 powered a number of jets including Boeing’s F-4 Phantom, which is also here and flying in Oshkosh. 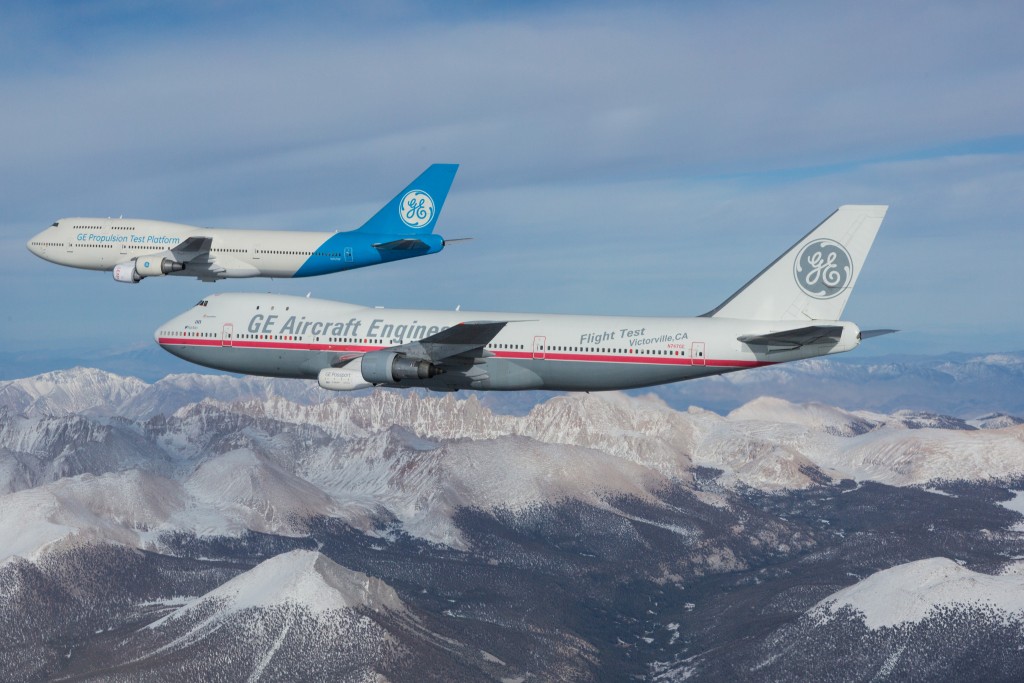 GE is using a pair of modified Boeing 747s to flight-test its latest jet engines like the LEAP and the Passport. Image credit: GE Aviation

GE just started testing its latest engine—the world’s largest—for the next-generation version on the 777, the 777X. The engine, called GE9X, is as wide the body of a Boeing 737, also on display here. It includes 3D-printed parts and components from space-age ceramics called ceramic matrix composites. The innovations allow engineers to extract more power from the engine and make it more fuel-efficient.

Both technologies are also inside the LEAP-1B engines powering the next-generation Boeing 737 MAX jet, which the plane maker is currently flight-testing. They help make the LEAP achieve 15 percent more fuel-efficiency than other similar engines made by CFM, quieter and emit less pollution. That LEAP was developed by CFM international, a 50/50 joint venture between GE Aviation and France’s Safran Aircraft Engines. This engine will also power Airbus and COMAC planes. To date, CFM has received orders and commitments for more than 11,300 LEAP valued at nearly $160 billion. 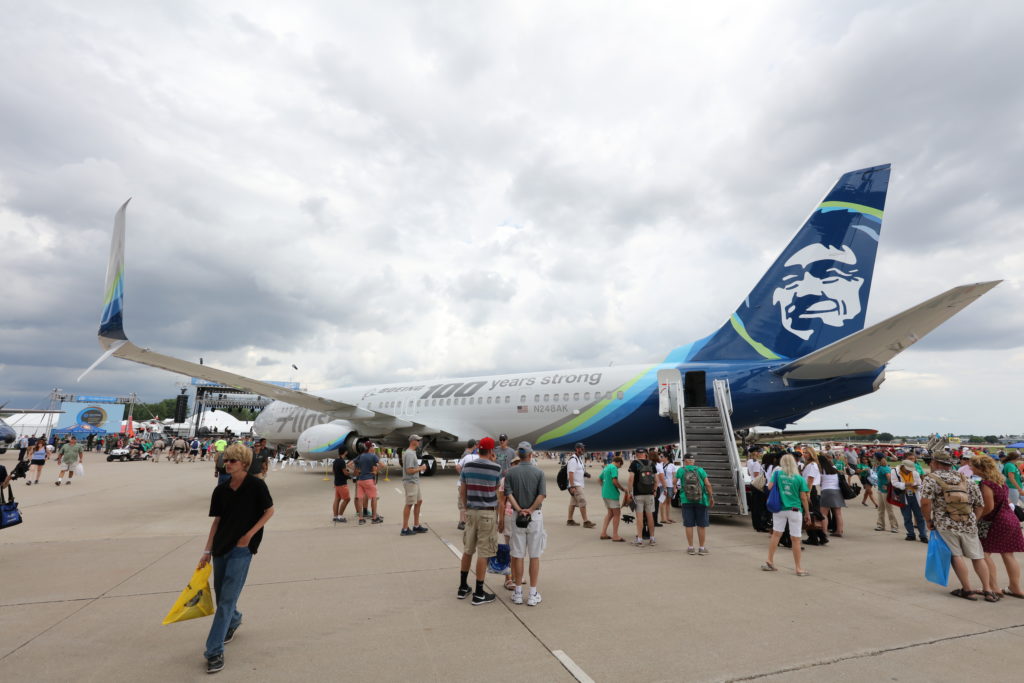 This Boeing 737-900 in Alaska Airlines livery uses a pair of CFM 56 engines built by CFM International, a joint venture between GE and France's Safran Aircraft Engines.

(Parts of this story previously appeared on GE Reports.)