It’s hard to remember what the online shopping experience was like before Amazon started its Prime shipping service in 2005. The immensely popular service, which gives customers two-day shipping for a flat yearly fee, is a big reason why Amazon has come to dominate online sales.

But meeting those high customer expectations is a big job. In 2007, Amazon spent $2 billion on logistics and shipping; last year those annual costs reached nearly $62 billion, according to Statista, and rose even as a percentage of sales, from less than 20% to more than 26%.

In recent years, Amazon has also started bringing its shipping business in-house, including operating its own network of cargo planes: 41 wide-body Boeing 767s and four narrow-body 737s. Amazon plans to increase the fleet to 70 sometime next year. To meet these aggressive expansion targets, Amazon has turned for help to GE Capital Aviation Services, or GECAS, one of the largest aircraft leasing companies in the world.

Earlier this year, Amazon agreed to lease five planes from GECAS, and at the Paris Air Show in June, Amazon and GE announced a deal for another 15 planes. All of them are Boeing 737-800 freighters, which are smaller than the Boeing 767-300 freighters that make up the bulk of Amazon’s fleet. “The additional 15 aircraft, on top of five we agreed to this year, give us more agility,” says Sarah Rhodes, director of Amazon Air. 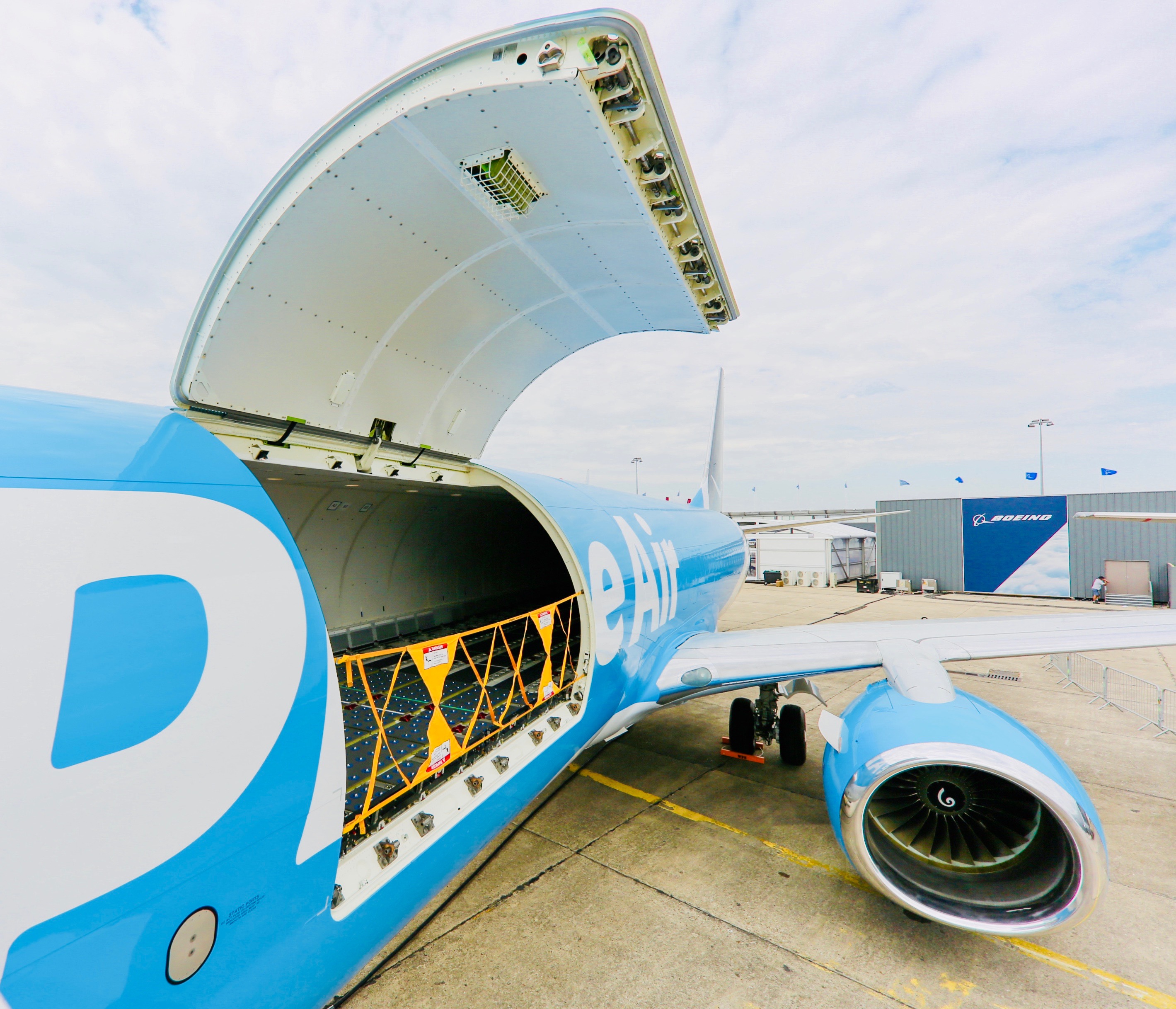 For GECAS, the Amazon deal is further confirmation that the company’s cargo business is riding the paradigm shift in online retail, where customers think nothing of buying three dresses or shirts online and returning two. Top and above images credit: Alex Schroff for GE Reports.


Smaller planes provide an important link in Amazon’s shipping network. If a customer in New Jersey orders a shirt from Amazon Prime, it might be fulfilled at an Amazon warehouse in Seattle and flown on a big 767 across the country to Wilmington, Ohio, where Amazon recently opened a hub. Next, workers may load the shirt on a smaller 737 and send it to Allentown, Pennsylvania, before transferring it to trucks for the final leg. “It’s more economical to fly a full 737 than a half-full 767,” Rhodes says. “These aircraft are critical for us to ensure that we make our deliveries on time.”

For GECAS, the Amazon deal is further confirmation that the company’s cargo business is riding the paradigm shift in online retail, where customers think nothing of buying three dresses or shirts online and returning two. “Amazon is a great customer to have on the program,” says Richard Greener, head of the cargo group. “Other e-commerce companies around the world will look at what they’re doing and replicate it.”

Part of GECAS’ cargo business takes passenger planes that have reached their midlife  age, typically 16 years, and converts them to cargo planes equipped with CFM56 engines developed by CFM International, a 50-50 joint venture between GE Aviation and Safran Aircraft Engines. Out go the rows of seats, creating large space where the cargo will go. Aluminum honeycomb bulkheads, designed to withstand 9 Gs of impact, protect the cockpit in the event that cargo breaks loose in the hold. “That’s important for keeping the crew safe and sound,” says Alvey Pratt, director for converted freighters and complex modifications at Boeing Global Services.

Once the planes are converted, GECAS can typically lease them for another 16-20 years, leasing them to other companies like Amazon. This also generates more engine parts sales and shop visits for CFM. Although cargo is only 6% of GECAS’ business — it also leases passenger planes and helicopters, among other things — it is the largest leasing company of cargo aircraft in the world, says Greener, with the portfolio growing to around 90 aircraft in the next three years, including 55 orders with Boeing.

“There’s a big replacement market for these types of aircraft,” Greener says. “We believe the market will call for over 300 over the next 11 or 12 years. GECAS will continue to be a major player in this sector.”

Looking at the whole industry, Boeing projects that air cargo traffic will double over the next 20 years, requiring the world’s freighter fleet to grow from approximately 1,870 to 3,260 freighters. More than 60% of the new freighters will be passenger-to-freighter conversions.