GE’s Digital DNA: When Big Data Was 30 Tons of Steel, Glass, and Copper

It was 66 years ago that the U.S. Army switched on the world’s first general purpose electronic computer and launched the information age. The army used the machine, called the Electronic Numerical Integrator and Computer (ENIAC), to calculate artillery trajectories. GE was the first company to tap the ENIAC for solving hard engineering problems.

There were other, mechanical computers before the ENIAC, write historians Dilys Winegrad and Astushi Akera, but “by showing that electronic computing circuitry could actually work, ENIAC paved the way for the modern computing industry that stands as its great legacy.”

The ENIAC was an unwieldy beast. It weighed 30 tons, held 18,000 vacuum tubes and required a small power plant to supply it with electricity. At 1,800 square feet, it was too big to fit in many New York City apartments. (By comparison, the iPhone 5 is almost 9,000 times more powerful). Programming the ENIAC and checking the code could take several weeks.

In 1954, GE bought its own computer, the Universal Automatic Computer I (UNIVAC I), and put computing at the core of the company. GE put the computer in Louisville, Ky., where engineers used it to build the first industrial computerized payroll for GE Appliances.

Over the years, GE computers monitored the liftoff of Apollo 11, which took the first humans to the moon, improved manufacturing control, and managed efficient asset allocation and other complex business problems.

Data is deep in GE’s DNA. The company is now building the industrial internet, a network of computers, machines and low-cost sensors, and pushing into the cloud. Last spring GE partnered with Amazon Web Services, Accenture and Pivotal and to build the “machine cloud,” the first big data and analytic platform robust enough to manage the stream of data generated by turbines, jet engines, medical scanners and other technology. Bill Ruh, vice president of GE’s Global Software Center, says that the platform will be “the first viable step to not only the next era of industrial productivity, but the next era of computing.”

One iPhone 5 is 9,000 times more powerful than the ENIAC, the first electronic digital computer. Here an Army officer sets the switches on one of ENIAC’s function tables. 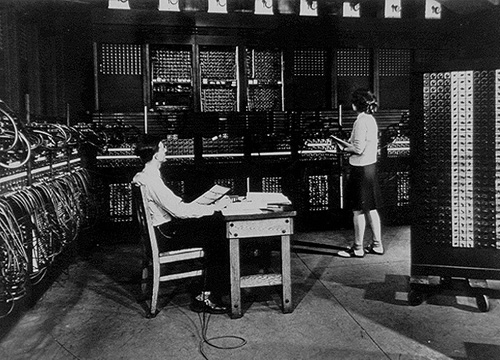 ENIAC was the first electronic computer.