A mass of electrical cables may look like spaghetti to many people, but Nicolas Godingen has become an expert at picking each strand apart in his mind’s eye.

Nearly every day, the field service manager for GE in Singapore gets messages and calls from engineers who need quick guidance on emergency repairs at, say, a substation supplying electricity to an airport. Or they might ask for help with an issue affecting the national power grid.

A repair crew member called him recently about an electrical fault inside a substation. The entire site had been shut down for a scheduled 24-hour outage, and a secondary fault had just popped up as crews were preparing to bring the power back on. The engineer doing the repair realized some wires weren’t plugged in correctly but he didn’t know which ones — they were all black. Over the phone, going step by step over the tiny numbers labeled on the cables, Godingen helped the caller identify the right wires. “The time was short, so we had to be a bit quick,” Godingen says.

Such scrambles are now becoming a thing of the past, thanks to new wireless technology. One way to make the job easier involves issuing smart helmets to field service crews. Designed around a regular hard helmet, the headgear includes one mini-screen placed just above the wearer’s eyes, along with a camera that wirelessly feeds the engineer’s view back to a remote expert. That expert, who can be anywhere in the world, can monitor the repair on a screen in their office and offer guidance through built-in headphones.

This is a big change from the past, when field service engineers arrived at many jobs with a stack of papers in hand. Today they can be armed not just with smart helmets but also with tablets displaying, in real time, key information that makes it easier to track and complete projects. 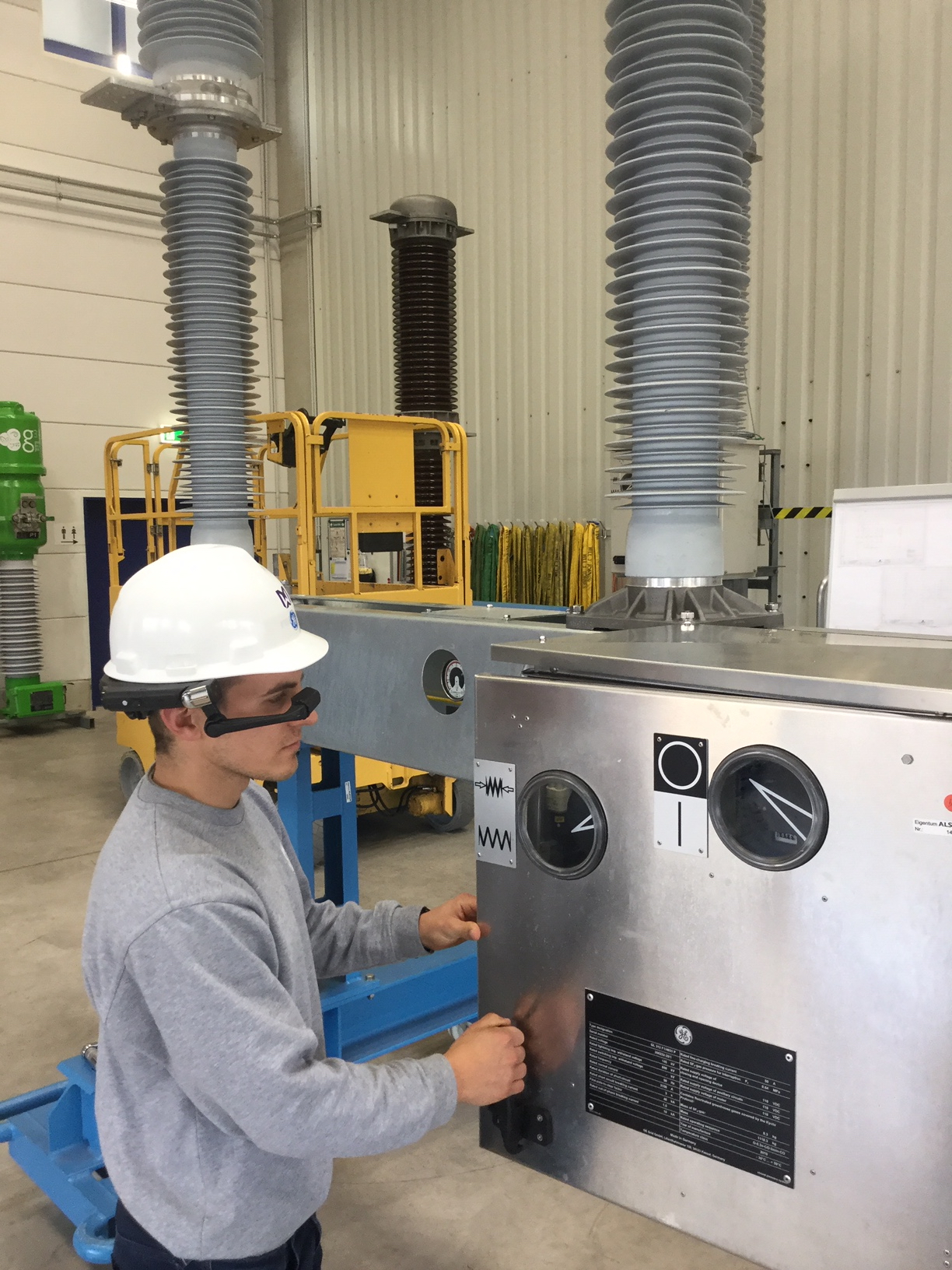 One way to make field service jobs easier involves issuing smart helmets to field service crews. Designed around a regular hard helmet, the headgear includes one mini-screen placed just above the wearer’s eyes, along with a camera that wirelessly feeds the engineer’s view back to a remote expert. Top and above images credit: GE Grid Solutions.


Where consumers are concerned, tech companies have had mixed results trying to sell smart glasses with augmented-reality capabilities. But the technology has found a strong niche in industrial settings such as substations and power plants, where engineers don’t mind wearing futuristic-looking devices if it helps speed up their work. That’s especially the case when every minute of downtime means lost revenue for a customer or a loss of power for consumers or industrial users. One 2004 study found that forced outages cost from three to four and a half times as much as planned outages.

The helmets being deployed by Godingen’s team in Asia are Bluetooth-enabled devices that overlay digital images on the wearer’s field of vision, and they come with a microphone and wireless router. Godingen says use of the smart helmet is promising. “It was very fluid,” he says of a recent service mission when he remotely instructed from China, via a smart helmet, a colleague who was in Singapore. “You can show [your engineer] exactly where they need to go instead of spending time on the phone.”

Godingen, who is French, says the technology can help solve many problems, some as mundane as colleagues tripping over his accent. More seriously, in the past GE sometimes had to send experts to remote locations on short notice, incurring extra costs and having to deal with time-consuming tasks like obtaining visas. It’s relatively easy for experts to find an hour in their schedules to make a call via smart helmet.

Working remotely, they can annotate the images engineers in the field are beaming back to them. The repair crews can see the notes on their visors in real time. “You can go directly to where the expert wants you to have a look,” Godingen says, adding that more than two experts can be on the call at the same time to share the engineer’s view.