I hope you and your family are well as we enter the fall season in the Northern Hemisphere. Just over two weeks ago, GE introduced a new purpose statement for the company: “We rise to the challenge of building a world that works.” I believe this is more true now than ever as our GE teams continue to show grit and resilience on a day-to-day basis in what continues to be a tough operating environment.  As we close out the third quarter, I wanted to share with you some recent company updates from across our businesses that exemplify this purpose statement and highlight GE’s commitment to innovation and serving our customers.

On a separate note, I just want to thank so many of you for voting GE IR Best Overall Large Cap and Best in Sector, Industrials as published recently by IR Magazine. We will keep working to help you in your investment process and remain focused on earning your trust and your support.

As a reminder, we will provide an update on our third quarter performance during the upcoming GE earnings call on October 28th at 8:00 AM ET. Materials and webcast information will be posted to GE’s investor website ahead of the event.

Thank you for your continued interest in GE,
Steve 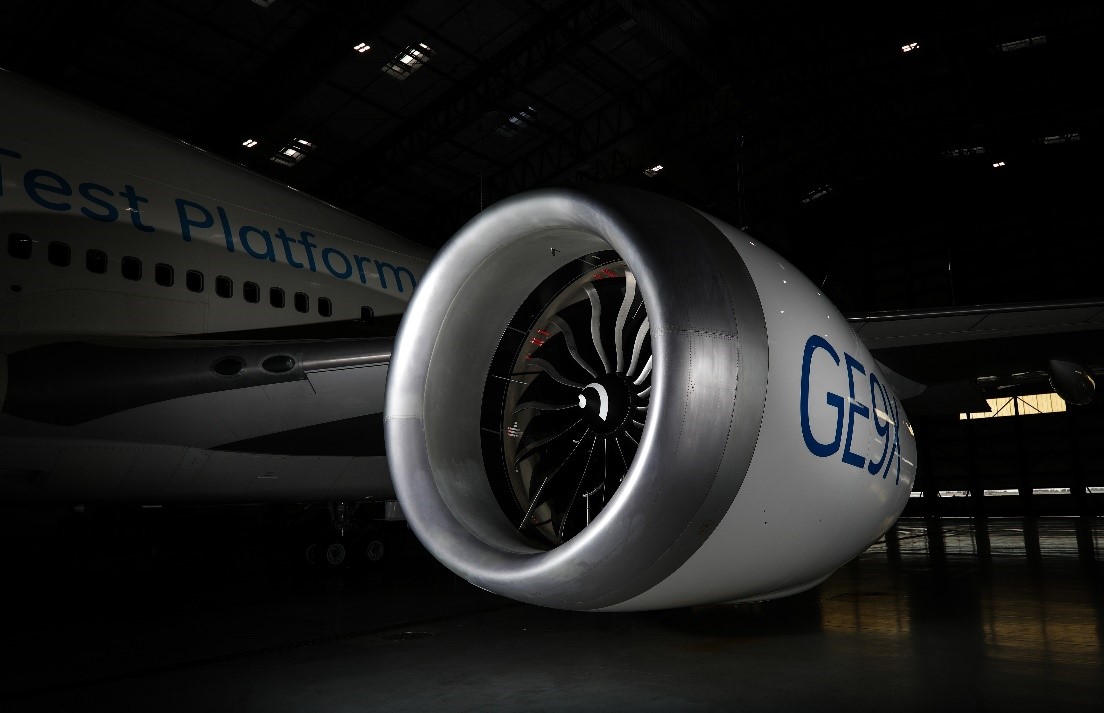 GE Aviation is currently conducting 3,000 cycles of additional ground testing on the GE9X engine to support Extended Operations approval and is also conducting maturation testing to help GE engineers prepare to support the engine when it enters into service. For the service and support of its customers, GE has also established GE9X engine training courses at its Customer Technical Education Center facility in Cincinnati to develop lean maintenance practices that will be implemented in customer training modules.

The GE Aviation Avionics team recently received Airbus’ Best Performer award in Supply Chain & Quality Improvement for their “sustained performance, strong continuous improvement and a customer-oriented approach.” The award relates to supplying Airbus with the datalink control and display unit (DCDU) which is fitted to the Airbus A320 and A330 aircraft. Produced in high volumes at GE Aviation’s Cheltenham facility, the site has supplied Airbus with more than 12,000 DCDUs since 1996.

“We have a strong collaborative relationship with Airbus that demands high standards in shipping quality product on time and consistently,” said Alan Caslavka, president of Avionics for GE Aviation. “This award recognizes the entire team for maintaining a customer-focused approach, while acting quickly to resolve any issues.” 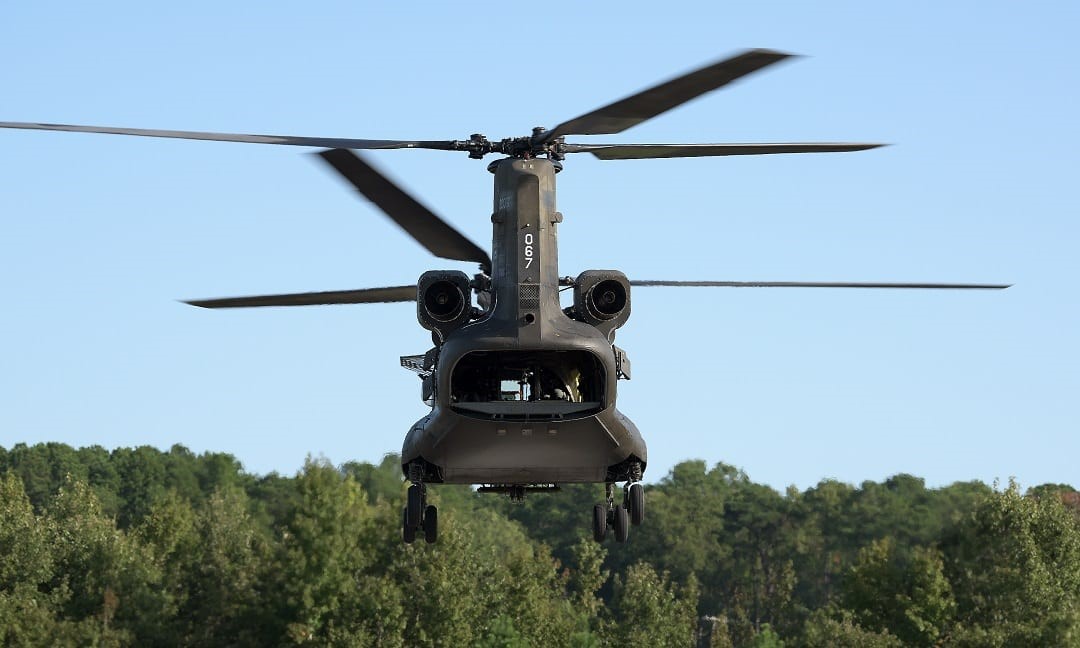 The U.S. Army achieved its first flight of a Chinook helicopter with GE Aviation’s T408 engines, a milestone that could expand the capabilities of future Chinook heavy-lift missions. This flight culminates five years of research and development looking at the feasibility and benefits of higher-power engines while assessing and reducing the technical risks of integrating advanced engines in a Chinook aircraft. Flight tests are anticipated to occur through the end of the year.

Additionally, GE Aviation recently delivered the first of 19 engines for the F-15EX advanced fighter as part of a contract that the Air Force Life Cycle Management Center awarded GE Aviation in June 2020.  In 2014, GE began investing and made a long-term commitment to become qualified on the F-15EX, and today the F110-GE-129 engine is the only engine tested, integrated and certified for the fly-by-wire F-15EX. 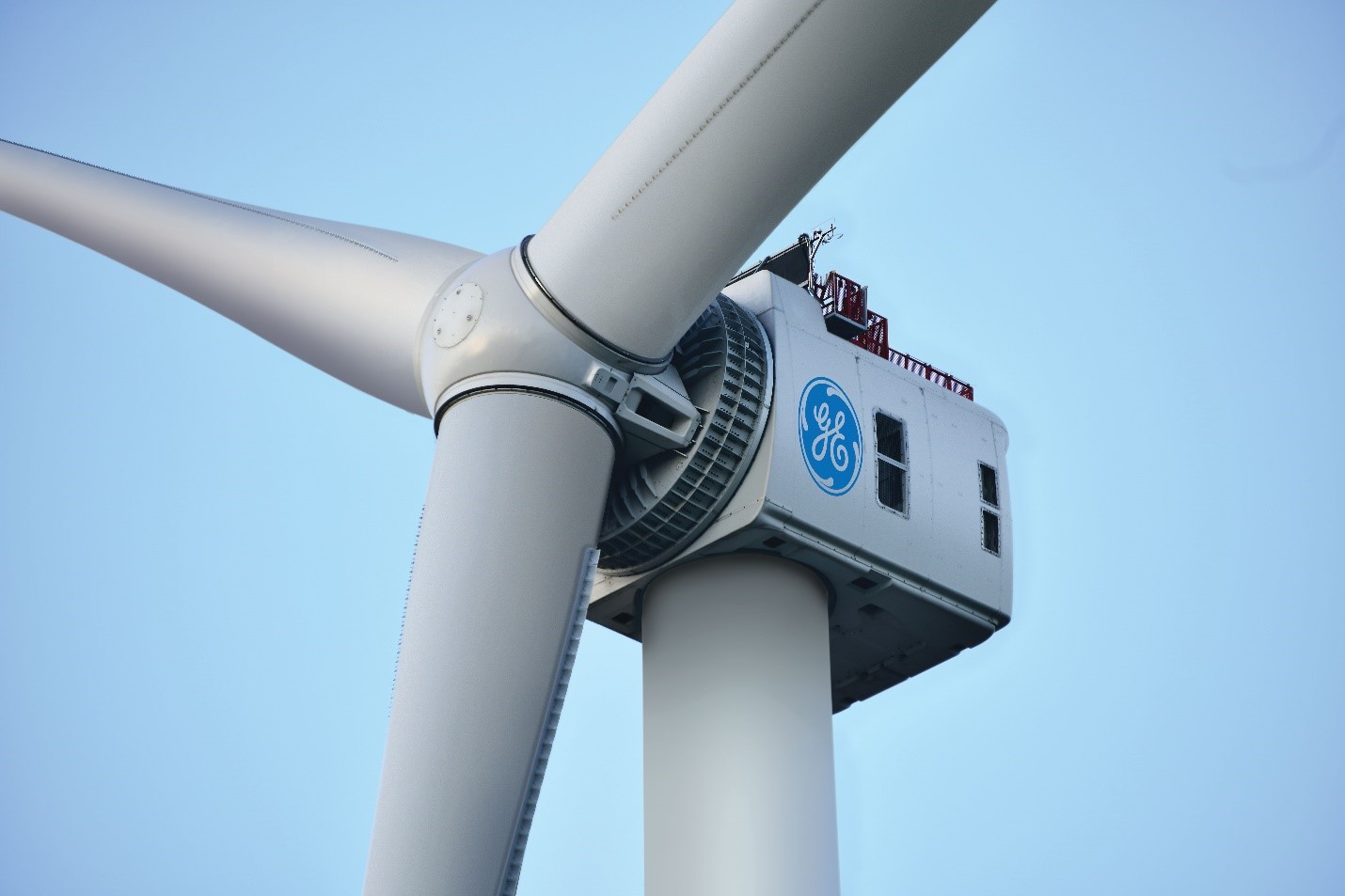 GE Renewable Energy announced that it finalized supply contracts with Dogger Bank Wind Farm (a 50:50 joint venture between SSE Renewables and Equinor) for the first two phases of what will become the world’s largest offshore wind farm. The first two phases, Dogger Bank A & B, will each feature 95 Haliade-X 13 MW wind turbines as well as a five-year service and warranty agreement.

The Haliade-X 13 MW is an enhanced version of the 12 MW unit which has been operating as a prototype in Rotterdam since November 2019 and recently secured its provisional type certificate from DNV-GL. The uprated 13 MW Haliade-X will also feature 107-meter long blades and 220-meter rotor.

The Dogger Bank Wind Farm is located over 130 km off the north-east coast of England and will be capable of powering up to 4.5 million homes each year when complete in 2026.

Despite Challenges Posed By COVID-19, GE Gas Power Continues To Deliver For Its Customers 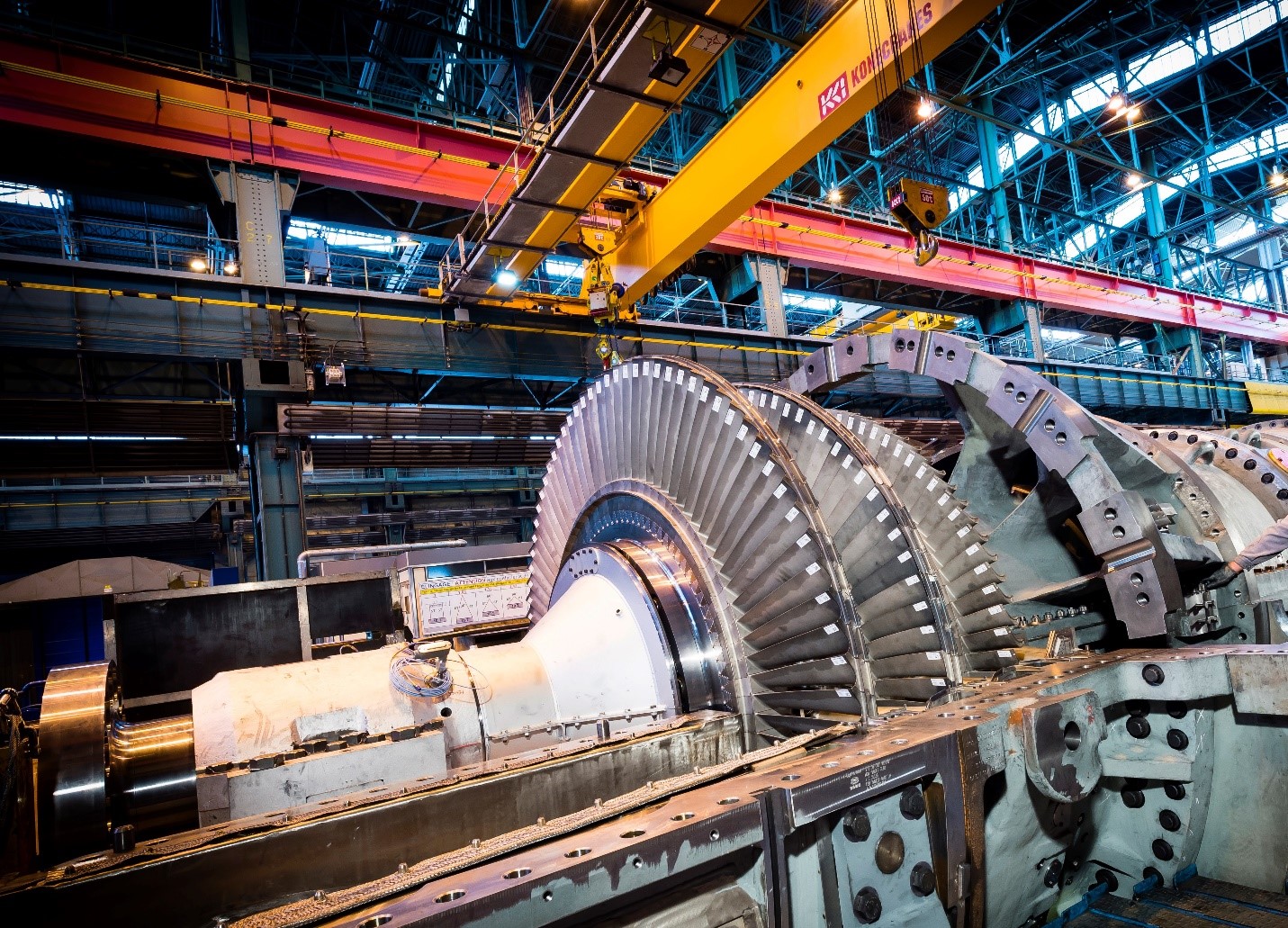 GE Gas Power announced the successful rehabilitation of three 9E.03 gas turbines at two Niger Delta Power Holding Company’s (NDPHC) Power Plants in Calabar and Sapele, Nigeria. This rehabilitation reduces the risk of unplanned downtime of power generation equipment, enabling the plants to reliably secure and restore the supply of up to 360 megawatts of electricity to the national grid.

Engineers from GE worked together and in collaboration with NDPHC  to implement safety measures to help reduce the risk of exposure to COVID-19, including frequent disinfections at the site, physical distancing, standard passive and active temperature screenings for personnel, and the use of personal protective equipment such as masks and gloves.

Chiedu Ugbo, Managing Director of NDPHC said that “GE’s efficiency to mobilize local teams on-site with the required technical skills and expertise, as well as GE’s global supply chain scale was crucial to ensure the timely and safe completion of the outages at the sites and help us achieve our goal.”

Last week, GE announced its intention to exit the new build coal power market. This is an important move for the company as we continue to invest in our core renewable energy and power generation businesses with a focus on making electricity more affordable, reliable, accessible, and sustainable. GE Steam Power will continue to deliver turbine islands for the nuclear market and service existing nuclear and coal power plants.

Russell Stokes, GE Senior Vice President and President & CEO of GE Power Portfolio said, “With the continued transformation of GE, we are focused on power generation businesses that have attractive economics and a growth trajectory. As we pursue this exit from the new build coal power market, we will continue to support our customers, helping them to keep their existing plants running in a cost-effective and efficient way with best-in-class technology and service expertise.” 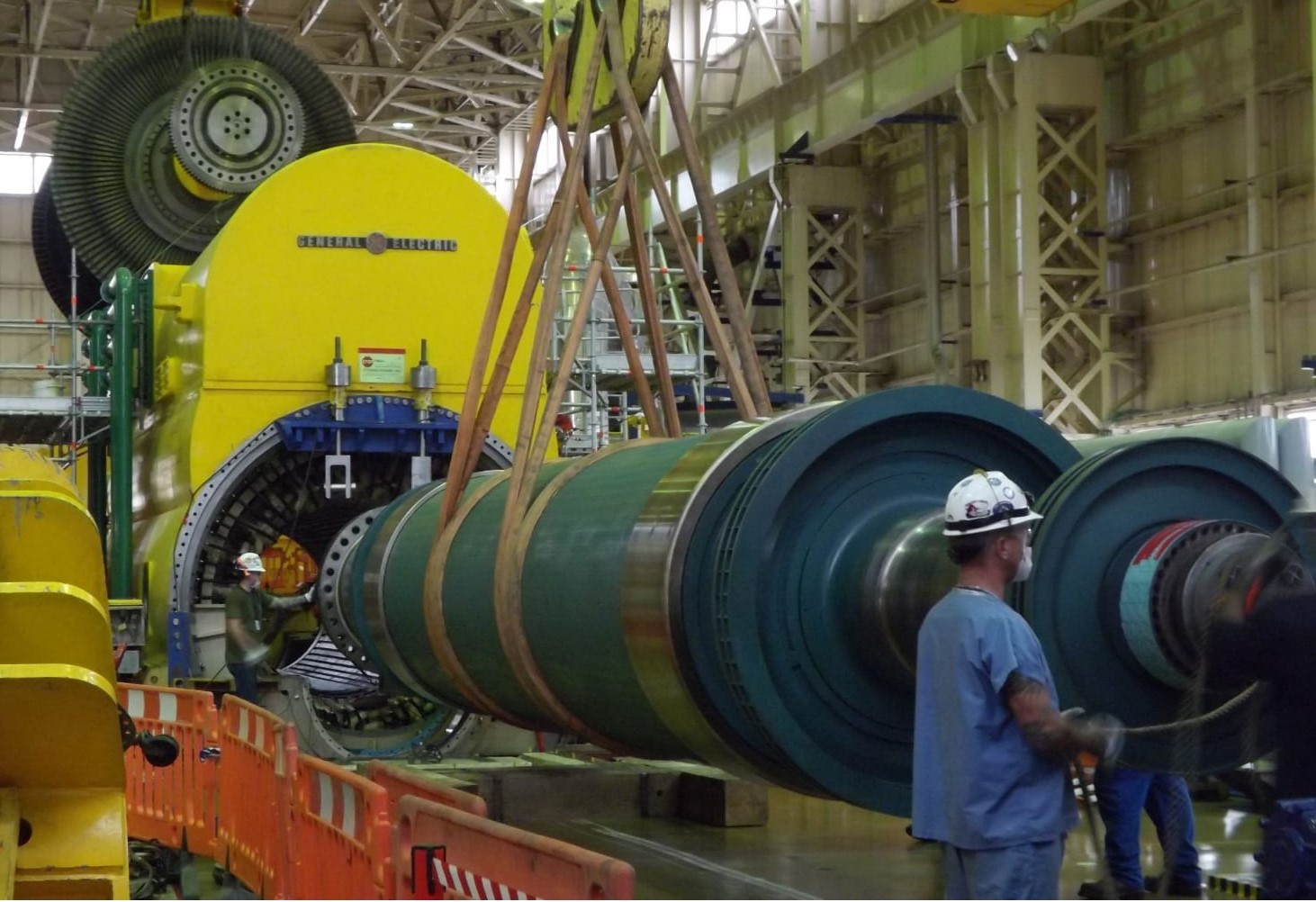 Pictured above: View of the steam turbine low pressure module and generator rotor at the Cernavoda nuclear power plant, Romania.

GE Steam Power completed a major steam turbine and generator outage at the Cernavoda nuclear power plant in only 30 days with all the necessary safety precautions in place amidst COVID-19. Originally scheduled for April, the outage was postponed until September as COVID-19 spread across the region. However, at Societatea Nationala Nuclearelectrica’s (SNN) request, the project was re-accelerated to begin in June.

One of the biggest challenges during the project involved getting all needed field personnel to the Cernavoda site from outside of Europe. This outage required several field specialists from the United States to perform the work, including generator and field materials exclusion maintenance. With flight restrictions and unexpected cancellations due to the pandemic, GE took the unusual step of hiring a charter flight to transport the specialists, thereby avoiding project delays while ensuring the safety of its experts. GE also brought in two Environmental, Health and Safety experts to oversee safety protocols throughout the project while SNN tested the onsite workers daily. SNN’s role in the safety partnership was integral to ensuring compliance with country and local protocols and contributed to preventing any COVID-19 cases during or following the project’s completion.

Cernavoda plays a critical role in delivering 1,400 MW of CO2-free nuclear power for Romania, about 20% of the country’s overall electricity.