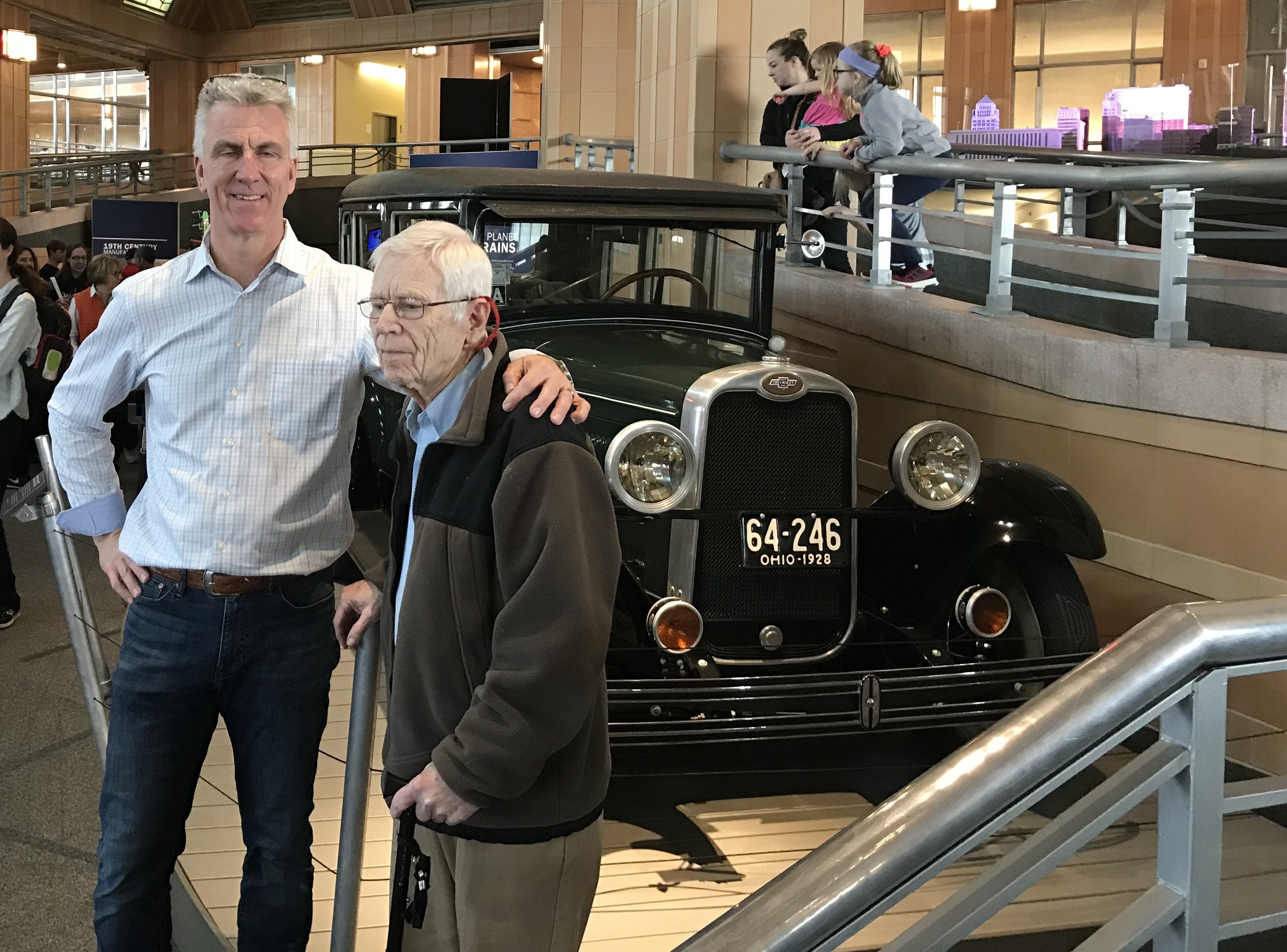 Bill Kircher worked on jet engines at GE but beyond that, his son Dave didn’t know a whole lot about his vocation. When Dave Kircher got to high school, though, Bill told him he would be attending the University of Cincinnati — and paying for it. Bill also arranged for his son to get a cooperative-education job at GE while he was in school, and Dave agreed; but it wasn’t until he showed up to work that he really started to understand the scope of his father’s career. Every day at lunchtime, Bill would walk Dave around the plant, explaining how GE manufactured engine parts. Soon enough Dave got the bug too — one co-op job led to another, then to a full-time gig as a GE engineer. Finally Dave realized why Bill had pushed him so ardently: “He wanted to make sure we were focused on an outcome. There are not a lot of companies that make jet engines.”

The rest is history: Thirty years later, Dave Kircher is still with GE Aviation, where he’s held many different roles, and is now the general manager of regional engines and services. Bill, who’s now 92 years old, retired in 1988 after 39 years with the company. But as Dave and his wife, Linda, make their way to the Paris Air Show — which starts Monday — they’ll be thinking of Bill and the sacrifices he made, both on the factory floor and off of it: The elder Kircher also served in the Navy during World War II, and passed down to his family a love of flight. Dave and Linda, another GE employee, are traveling to France with their daughter, Georgia, who’ll soon enter college at the University of Dayton — and hopes to co-op at GE, just like her father before her.

Read more here, and don’t forget that Father’s Day is this weekend. You know what Dad loves? Subscriptions.

Jack Page is staying in a hotel room in Helsinki this week with heavy blinds — a necessity at a time of year when, in Northern Europe, the sun doesn’t set until nearly midnight, and rises a few short hours later. A product manager for GE Healthcare’s anesthesia division in Madison, Wisconsin, Page has a lot to stay awake for during his time in Finland: He’s joining experts from around the world at HIMSS & Health 2.0 Europe, a conference focusing on how data, software, artificial intelligence and other digital tools are changing healthcare, making it more tailored to individual patients and the results that they and their doctors are seeking. “This is the biggest digital health gathering in Europe where any digital company in healthcare would want to be,” Page says.

Innovation from start to Finnish: In addition to an anesthesia app that Page and his colleagues are working on, the GE display at HIMSS features AI, machine learning software, voice recognition and other tools. In the digital age, doctors are increasingly drawing on such technology to help them sift through gigabytes worth of imaging data, collaborate online to devise personalized cancer treatments, and keep tabs on cardiac patients. GE’s digital push into healthcare is also inspiring collaborations between major industry players and creative startups, opportunities that can lead to matches made in heaven, or at least in Helsinki: Inside its Finland headquarters, GE Healthcare created the Health Innovation Village, a small-business incubator aimed at breaking down barriers and letting the best ideas through.

For patients, general anesthesia is a straightforward enough proposition: Count backwards from 10 and fall asleep. But Jack Page and his colleagues know it’s far more complicated than that. In fact, anesthesia, while one of the wonders of modern medicine, is a highly delicate process that can pose problems during and after an operation. For instance, operating-room complications linked to lung ventilation during anesthesia are second only to skin and soft-tissue infections. Anesthetic agents are also expensive and contain potent greenhouse gases like chlorofluorocarbons — meaning that the annual greenhouse emissions from a midsize hospital can equal the output of about 1,200 cars. When they hit Helsinki this week, Page and his colleagues were showing off their solutions to optimize the anesthetic process — in essence, to do more with less.

To sleep, perchance to dream of software solutions: To that end, they’ve recently rolled out both hardware and software including the Aisys CS2, a digital anesthesia machine, and Carestation Insights, a suite of applications that crunch data the machine generates. The goal, similar to the one GE’s engineers have sought with gas turbines and jet engines, is developing a “digital ecosystem” complete with cloud-based apps that helps anesthesiologists as well as patients — something far bigger and more ambitious than any one machine or program. “We want hospitals to use the technology to solve their problems,” Page says. “We need to provide comprehensive solutions tied to outcomes — an ecosystem, not a single product.”

In New Zealand, these apps helped a Christchurch hospital reduce its usage of “fresh gas,” and the amount of expensive anesthetic ingredients, by 12%. Read more about what they can do here.