GE will sell its Appliances business to Sweden’s Electrolux in a strategic move that boosts the focus on the company’s core industrial units. The $3.3 billion, all-cash deal follows GE’s recent bid to acquire the power and grid businesses of the French industrial giant Alstom.

Jeff Immelt, GE chairman and CEO said that the transaction would advance GE’s strategy to be “the world’s best infrastructure and technology company.” He said that GE was building “a new type of industrial company, one with a balanced, competitively positioned portfolio of infrastructure businesses with strong advantages in technology, growth markets and a culture of simplification.”

GE has entered into a long-term agreement with Electrolux that will allow the century-old Swedish consumer goods company to keep using the GE Appliances brand.

The GE and Electrolux boards of directors already approved the deal. It remains subject to customary closing conditions and regulatory approvals. It’s planned to close in 2015.

GE’s long-term strategy has focused on building up the company’s industrial units, shrinking its financial services and growing investment in new technologies. 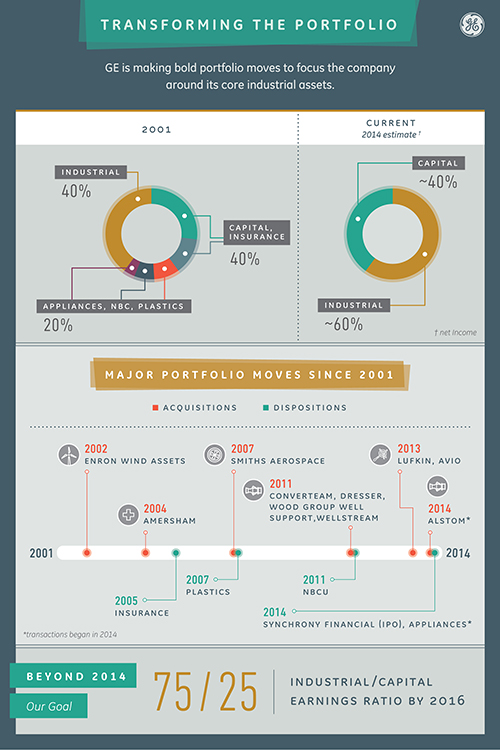 Besides the Alstom bid, which got the green light from the boards of both companies in June, GE launched the IPO of Synchrony Financial, its North American retail finance business, as part of its staged exit from that business. The moves represent GE’s longer-term redeployment of capital from non-core assets like media, plastics and insurance to higher-growth, higher-margin businesses in energy, power generation, aviation and healthcare.

GE is also spending 5 percent of revenues on R&D. The investment has yielded advanced technologies like Tier 4 locomotives, gas turbines, new materials and next-generation jet engines like the GEnx (top image). It also added to the company’s record $246 billion backlog in the second quarter, up $23 billion from a year ago.

GE is using these steps to achieve its goal of getting 75 percent of earnings from its industrial businesses by 2016.

“We are proud of the role [GE Appliances] has played in GE’s history,” Immelt said. “We have greatly strengthened this franchise in the past few years. GE Appliances’ people, valuable home appliances brand, products, distribution, and service capabilities make it a perfect fit with Electrolux.“