You could say that renewables are blowing up in North America. According to the Department of Energy, a third of U.S. states now get at least 10% of their in-state electricity generation from renewables, and in the case of Iowa, 57% of the state’s energy comes from wind. These numbers are projected to grow as the United States moves toward a goal of 100% carbon-free energy generation by 2035.

But like all transformations, the energy transition to more renewables isn’t simple. As operators seek to capture more wind and solar energy, they also want to keep costs down. “As wind and solar operators grow, they are going to need better tools to work efficiently and profitably,” says Brian Case, chief digital officer at GE Renewable Energy.

These tools now include Lifespan, a software suite for renewables operators designed to optimize asset performance and operations across their fleet. GE announced Lifespan this week at Cleanpower, the American Clean Power Association’s annual conference in San Antonio, Texas.

Keeping tabs on renewables fleets is a complex task, given their geographic diversity. Wind power maintenance operations on a site in Texas may have local field teams executing on the top-priority tasks, engineers in Chicago providing troubleshooting recommendations, and financial analysts based in New York City optimizing large-scale fleet operations. Often, these teams are siloed physically and digitally, with access to different data and workflows. Lifespan breaks down these barriers to allow disparate teams to operate as a cohesive group using the same asset and operational data across unified workflows.The Lifespan product suite is designed to help GE and their customers better analyze these assets in real time, remotely and compliantly control them, and more efficiently maintain them in the field. “Lifespan brings everything together in a way that both aggregates data and enables secure command and control,” explains Case, a West Point graduate and U.S. Army veteran who was awarded a Bronze Star before coming to GE 16 years ago.

To develop the new product suite, Case and his team spent two and a half years working directly with customers and operators of GE’s wind turbine fleet, including technicians working from five different remote operations centers and field teams from more than 40 countries around the globe. “We really focused on the end user and trying to understand their pain points,” Case says. “That included sending software engineers to climb towers jointly with field technicians.” 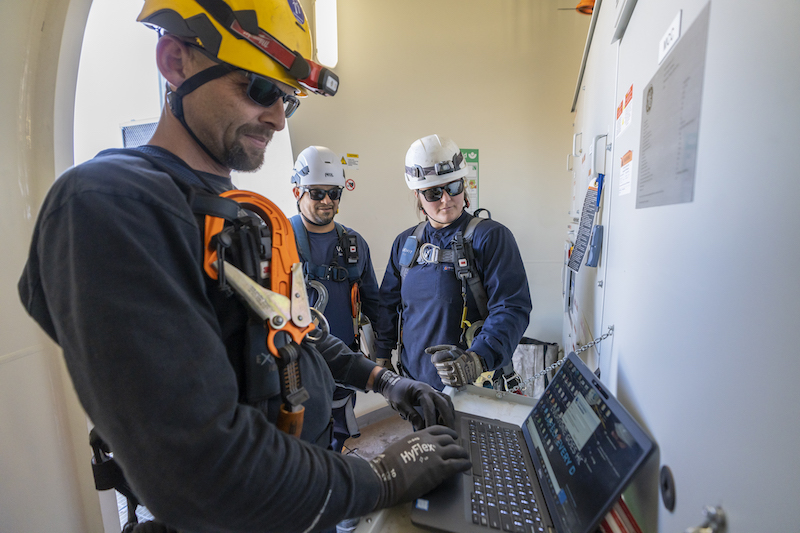 GE developers, working side by side with operators, built Lifespan to solve their biggest challenges. For example, the application suite uses artificial intelligence to translate current performance and inspection data into accurate predictions of turbine maintenance issues that will arise in the future. “We help to identify issues across all components before it requires a full component replacement, oftentimes reducing the corrective action to a lower-cost repair action,” Case says.

Lifespan relies on an “edge-to-cloud” computing network. This means it collects and analyzes information on relatively smaller, more local and faster data servers — servers on the “edge” of the internet — before sending it to the larger data cloud for bigger-picture analysis and longer-term storage. The specifics may mean little to the average user, but edge-to-cloud computing means data can be handled more safely and more efficiently than it would be in the cloud — and information stored at the edge can be retrieved at speeds sub-seconds faster than data stored in the cloud. Multiplied across hundreds of data readings every day, those time savings can make a huge difference when operators are faced with quickly reallocating resources to meet changing demand or responding to emergency equipment issues. The grid has been described as the largest machine ever built by humans, and the supply must always meet demand for the system to work properly and avoid outages.

The GE team tested Lifespan with the same people who helped them design it: their customers. Seeing efficiency gains in the neighborhood of $50 million over three years — the platform has become a core part of GE’s own day-to-day business.

“The biggest challenge with digital isn’t actually the technology itself,” Case says. “It’s changing the processes around how work gets done to capture the benefits of highly efficient digital workflows, artificial intelligence and advanced data management — and exposing these benefits to every level of their organizations.”