When a blast of icy weather hit a Canadian wind farm two winters ago, its chill lingered a month. The storm covered almost three dozen wind turbines with ice and they had to shut down. “The cold weather [was] not an issue,” the farm’s manager Mark Hachey told CBC News. “They can run in rain, they can run in snow. It’s when you get an accumulation of ice, much similar to an airplane.”
Physicist  Masako Yamada is on the case. She and her colleagues at GE labs have been running ice-forming simulations on Titan, the fastest supercomputer in the U.S. located at the Oak Ridge National Laboratory. She says that the process is analogous to “looking for a needle in a haystack of needles.”

The team is using the research to develop “ice-phobic” surfaces and ways to prevent ice build up. “I am trying to look for how water transforms into ice,” says Yamada, who works at the Advanced Computing Lab at GE Global Research (GRC). “As computing gets better, it will get closer to real life, closer to nature.”

Dr. Yamada is “looking for a needle in a haystack of needles.” GIF credits: Invention Factory.

GE scientists have been experimenting with ice for more than six decades. (They even created artificial snowfall in upstate New York.) But never on the scale of Yamada’s work. She said that she could model water droplets that are 50 nanometers in size, far smaller than actual droplets, over incredibly short fragments of time called femtoseconds. (One femtosecond is to one second is what one second is to 31.7 million years.) “It’s analogous to creating a high-speed video using an atomic microscope,” Yamada said. “Titan is one of the few resources in the world that can handle our needs.” 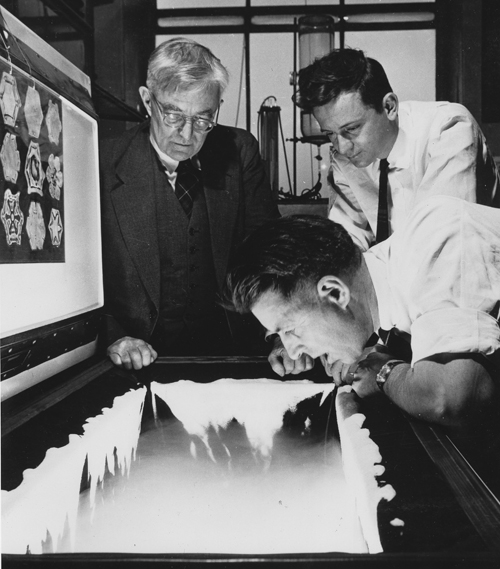 Nobel Prize winner Irving Langmuir is standing next to  Bernard Vonnegut (Kurt Vonnegut’s brother) in a GE lab. Vincent Schaefer is leaning over a cold chamber where they are seeding a snow cloud. Image credit: The Schenectady Museum of Innovation and Science.

There are several ways to stop ice from forming: by reducing the “stickiness” between ice and surfaces, “bouncing” water droplets before they freeze and delaying the onset of freezing, and lowering the freezing temperature. “We can see exactly how the water molecules interact with the surfaces,” Yamada said. “This is simply impossible using any physical test. In addition, in the virtual world, the results are not impacted by dirt, defects and other random sources of noise.”

The research has applications everywhere, from windshields to the perfect ice cream scooper. “We have observed that certain types of surfaces hinder ice formation, but the exact mechanism was unknown,” says Rick Arthur, who leads the Advanced Computing Lab at GRC. “We use simulations as a means to gain insight into the conditions under which ice can be suppressed. Many industrial systems that operate in cold environments stand to benefit from resisting ice including wind turbines and offshore oil and gas drilling and production rigs operating in extremely cold environments.”

The simulation above shows ice spreading through a water droplet. The image is a real scientific model that’s being developed on Titan. Video credits: Mike Matheson, Oak Ridge National Lab.

For Yamada, ice is just the beginning. “I’m hoping HPC (high-performance computing) can someday be used to address corrosion or disease progress, where many moles [a unit of measurement] of molecules need to be monitored over seconds, hours or even years,” she recently told HPCwire. “We’re at least 15 orders of magnitude away, so there’s a lot of opportunity to innovate hardware, acceleration algorithms, data analysis, data transfer and storage.”

Says Yamada: “Knowing which tools to use for a given problem is one of the subtleties and skills of being a good computational scientist.”