Driving across the eastern end of New York State, you can’t fail to notice the clusters of wind turbines that have popped up over the past decade on undulating fields and remote ridges. As in other parts of the world, these wind farms are a manifestation of America’s growing embrace of renewable energy.

But there’s more to wind power in this corner of the country than large rotors riding the steady Lake Ontario breeze. Just step inside a cavernous warehouse in Bergen, a village just south of Rochester, where engineers from GE Renewable Energy and their partners are working on innovations that could help the renewables industry pick up even more wind in the future.

Inside the warehouse, some 20 workers are using one of world’s largest 3D printers to form the bases of wind turbine towers from high-tech concrete. Their success could help the wind industry break through bottlenecks that today limit the size and power of onshore wind turbines and also lead to more efficient wind farm designs.

Christopher Kenny, senior engineering manager for emerging technologies at GE Renewable Energy and the leader of the facility, says that the wind industry has evolved tremendously in recent decades. But there are physical limits on how powerful land-based wind turbines can become. “Larger generators will require taller, stronger and larger towers,” he says. “If we don’t do anything, we’re going to run into a roadblock.” 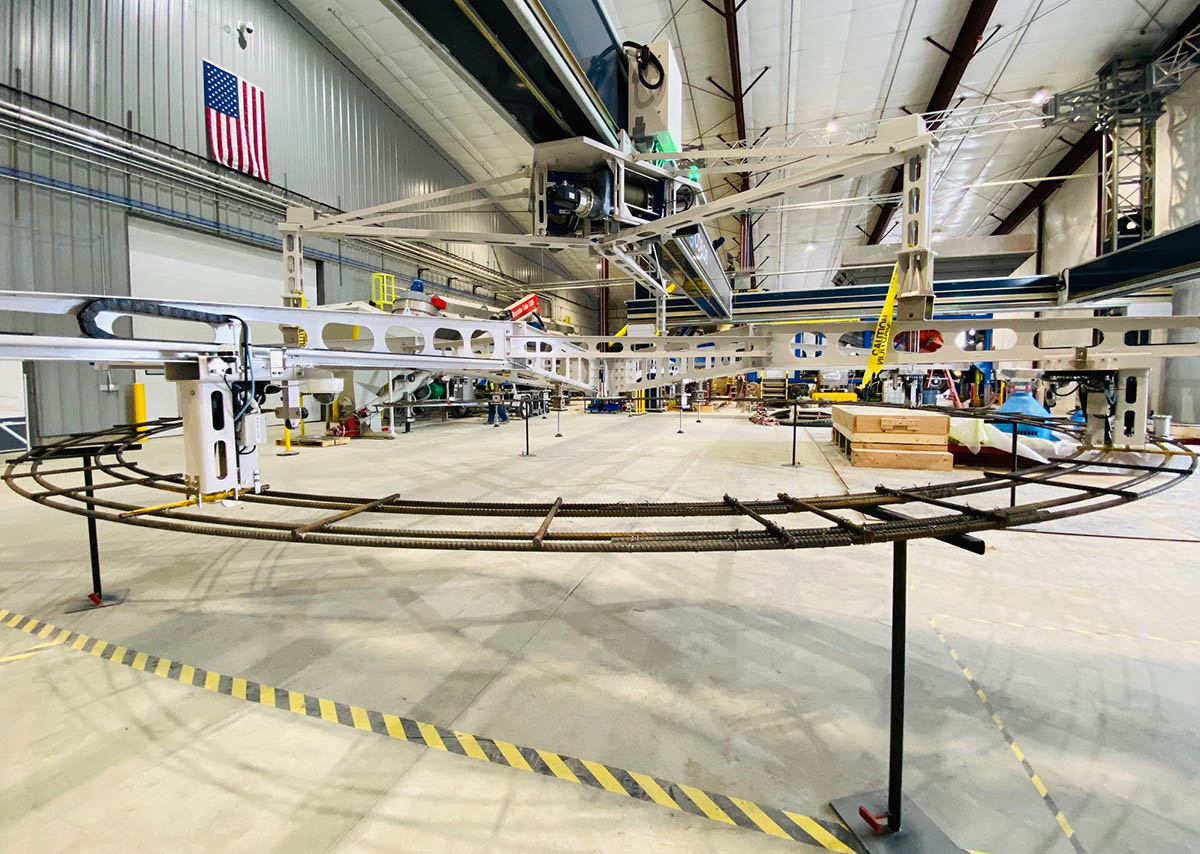 To make a wind turbine tower today, builders bring prefabricated steel tubes to the location on flatbed trucks and weld them together on-site. But as anyone who tried to move a piece of furniture into a New York City walk-up apartment will know, there are limits that can’t be breached. For turbine towers, that limit is about 14 feet in diameter. Make them any larger and they become too wide to fit on many roads. (Wind blades face a similar issue with length. But GE found an ingenious way to split the blades into two pieces and assemble them at the wind farm.) “It’s a real obstacle, but there’s a way around it,” Kenny says.

The way is 3D printing, also known as additive manufacturing. By 3D-printing the base of the tower from concrete on location, wind farm builders will be able to make it wider, and strong enough to support a taller and more powerful turbine. The method could also unlock new locations for wind generation.

The printer Kenny and his team are testing in Bergen consists of long trusses and beams connected at right angles in a way that resembles a concert stage at a music festival. Electrical motors attached to the beams move the printing nozzle in three directions and allow it to print concrete structures up to 20 meters tall — about 66 feet.

Kenny says that attaching a prefabricated steel tower to a concrete base 20 meters high could help wind farm designers build turbines with towers reaching 140 meters — 450 feet. Taller and more powerful turbines could help increase a wind farm’s annualized energy output (AEP), an important industry number that describes a wind turbine’s efficiency. The number represents the actual amount of energy the turbine produces per year and depends on turbine design, wind speed at a specific location and the number of windy days. “The hub height is critical for AEP gain, and today it’s typically not fully optimized,” Kenny says, adding that wind is typically stronger and steadier higher off the ground.

Since the printed concrete base can vary in height, printing could allow for turbine heights that are optimized to the local terrain. “When you think about very large wind farms where the terrain and wind changes, we’re limited on how we can vary the height of the turbine to maximize the site layout,” Kenny says.

The U.S. Department of Energy is funding the research with $5 million, underscoring the importance of the project. “We appreciate the support of the U.S. Department of Energy for the research we are doing here and are confident it will help make the wind farms of tomorrow even more efficient, economical and environmentally responsible,” said Danielle Merfeld, GE Renewable Energy chief technology officer. She said that “innovation will continue to be a key driver in accelerating the energy transition.” 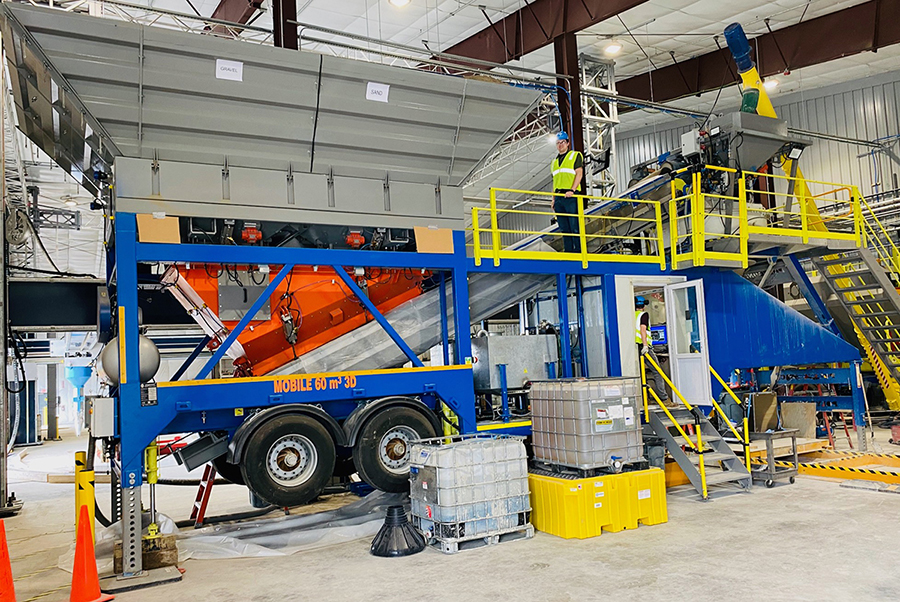 The facility will hold an “open house” on Thursday. Visitors will include Matteo Bellucci, advanced manufacturing technology leader at GE Renewable Energy; Henrik Lund-Nielsen, founder and general manager of COBOD, the Danish company that designed the 3D printer; Edelio Bermejo, head of global R&D, innovation and IP at Holcim, the partner helping GE develop the high-tech concrete for printing; and representatives from Optimation, a New York engineering firm assisting with developing and standardizing the printing process.

GE has been studying 3D-printed wind turbine towers for several years. Together with COBOD and Holcim, it printed concrete towers in Denmark in 2020.

Kenny, who was at the first printing test in Denmark, says that GE has spent the past two years working with COBOD on evolving the printer design and with Holcim on new compositions for the concrete. In Bergen, for example, GE is using local stone and sand to come up with a process that can help adapt the recipe at different locations. “Rather than trucking stone across the country, using local material makes economic sense and environmental sense,” Kenny says.

The collaboration has also led to identifying and building the core components the mobile printing operations will need in the field. They include the large printer, a mobile concrete batch plant on a trailer, a cement storage tank, also on wheels, and an assembly for forming circular rebar rings that go inside the concrete and support the towers. “All the tools and equipment we are developing to support the process will fit inside customized pods that can travel from site to site, and we’re testing the prototypes right here, right now,” Kenny says. 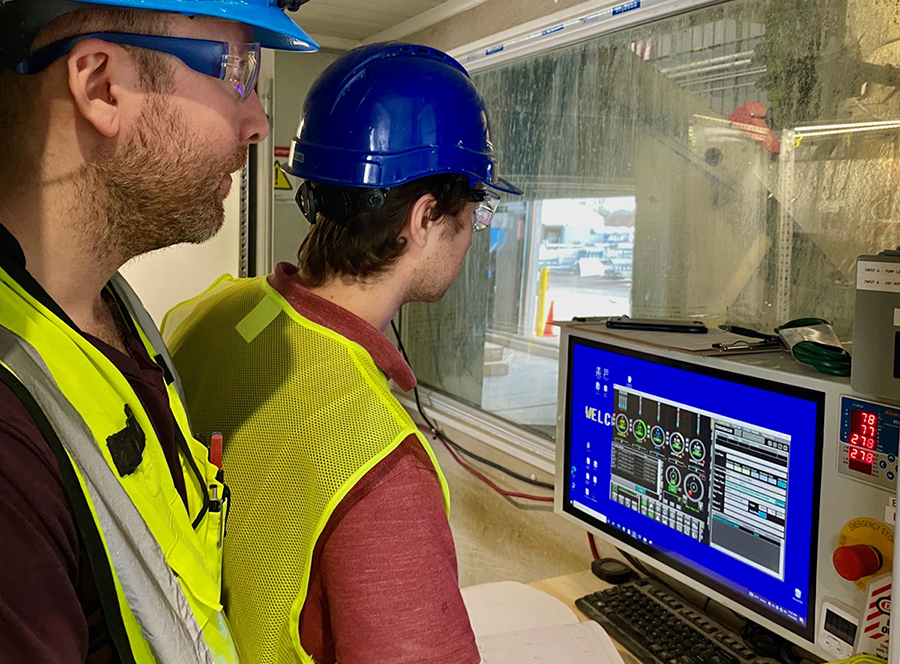 Don’t be fooled by the fact that the main construction medium here is concrete. This is high-tech work. The mobile concrete batch plant, for example, is loaded with sensors that weigh sand, stone and cement, measure the moisture content in the ingredients, and monitor the mixing torque, the rheology — the flow of the printing mixture — and other factors for each individual batch. Operators monitor and adjust the factors from a computer inside a glass cab in the middle of the trailer. “Once we mix it and make the concrete, we have only so much time to be able to print it,” Kenny says. “Based on a combination of testing, computer modeling and simulation work, the concrete is designed to develop strength at a certain rate to handle the layers above it and the weight of the rebar. This allows us to build the structure within our targeted time frame.”

The whole system is designed to work like this: The batch plant blends the cement from the storage tank and the stone, sand and water, and sends the concrete to the printer. The printer then extrudes layers of concrete in the desired shape through a special nozzle. Each layer is several inches thick. Like at the batch plant, the process is monitored by sensors and cameras. 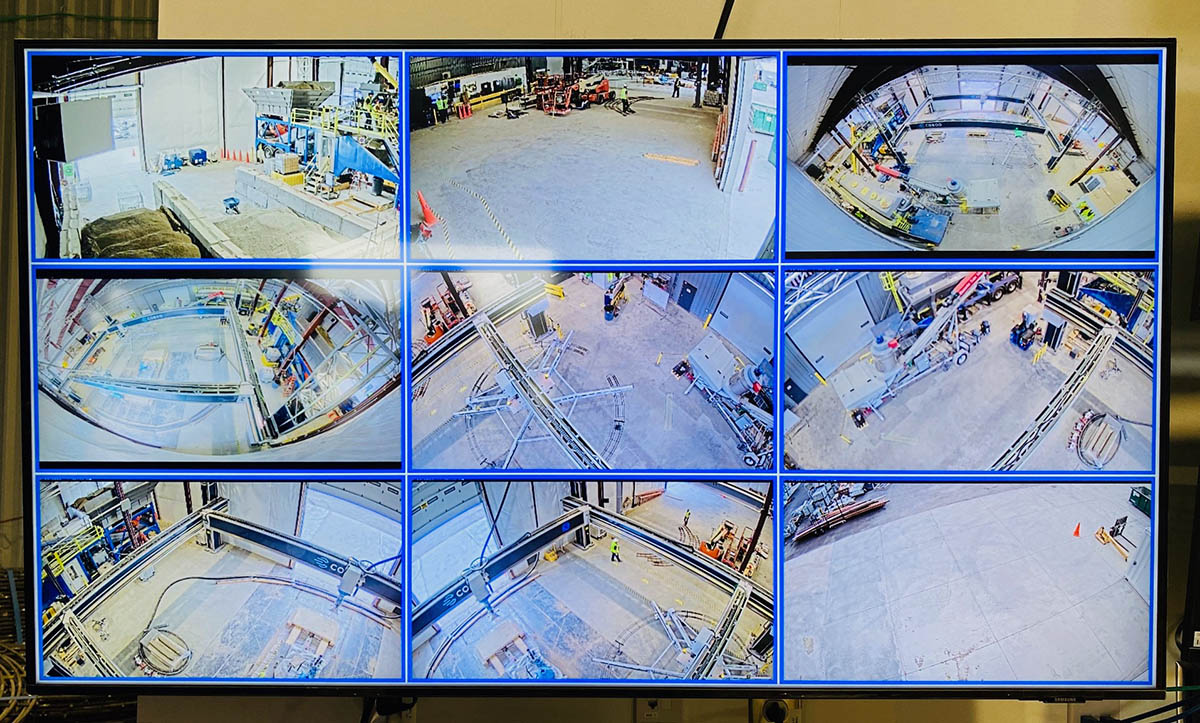 There are many engineering challenges the team needs to nail down. The concrete mix, for example, has to harden quickly so the layer on top of it will not deform it. But if the concrete hardens too fast, it can clog the printer and destroy the equipment. “It’s a fine balance,” Kenny says.

This monitoring is also important for quality control and certification. Naturally, the government will have to approve the process before GE can roll it out. “That’s a big part of the purpose of this facility,” Kenny says.

GE will test the printing process indoors in 2022 and plans to start printing outside next year, with the goal of demonstrating a full-scale outdoor tower segment. The ultimate goal is to demonstrate the ability to deliver cost-effective tall towers, and to do that the GE team is looking for a viable site for installing a prototype turbine that will generate 2 to 3 megawatts.

Some builders have already started 3D-printing homes, but 3D-printing a wind turbine tower requires solving challenges of a different magnitude. “Our loads and our structural requirements are significantly higher than in a 3D-printed home you see today,” Kenny says. “We are learning to leverage the opportunities that additive opens for us.”