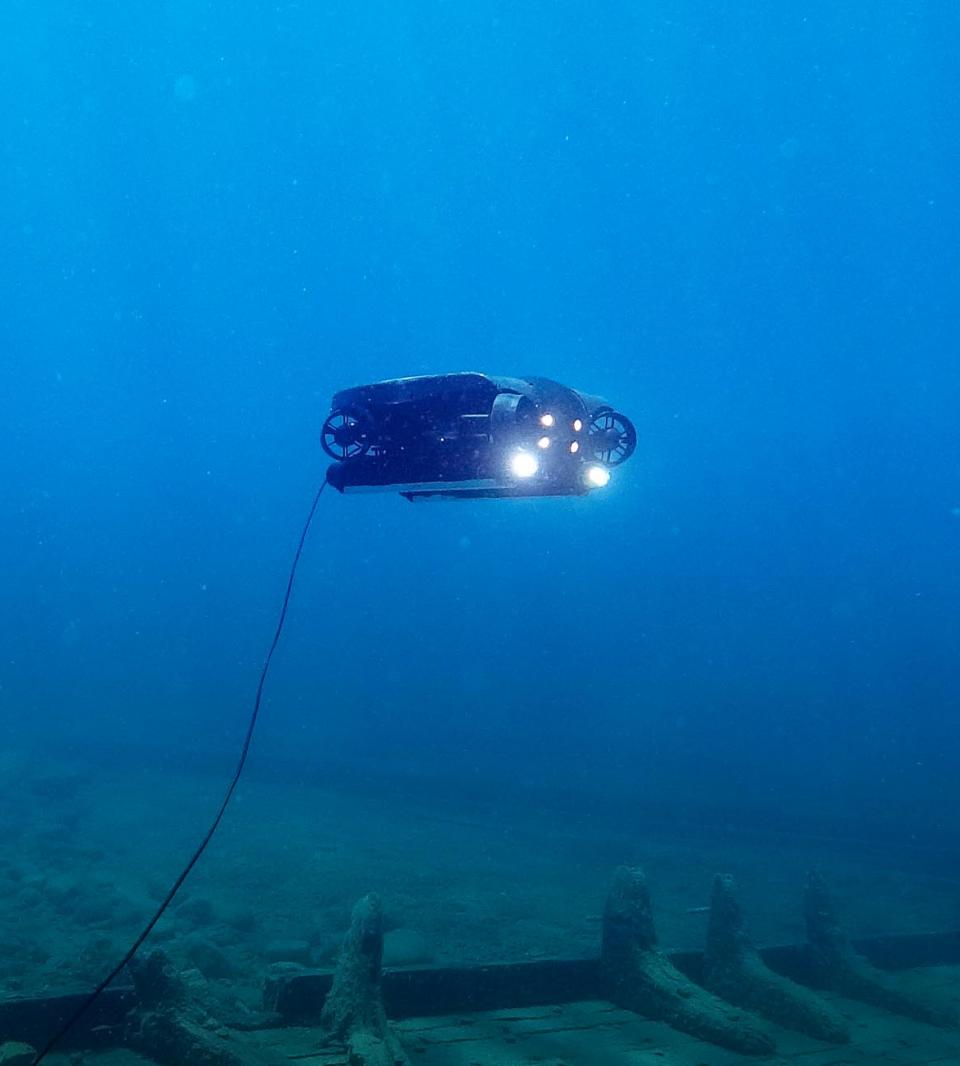 One Monday morning last autumn, David Auger-Habel, lead engineer at GE’s Hydro Solutions, walked along the banks of a photogenic reservoir in British Columbia, searching for the perfect shot. But the GE Renewable Energy engineer wasn’t looking to snap a panorama of the region’s natural wonders. He needed a close-up of large hydropower turbines spinning out of sight, deep inside an underground powerhouse.

Taking such images can be tricky, but Auger-Habel came prepared. He brought with him a new beaver-size drone submarine that allowed him to maneuver into the labyrinth of a Francis turbine and between its runner blades. The design for the submarine was based on the winning idea from a hackathon GE Renewable Energy held in Montreal in 2019.

To Auger-Habel, the mission felt fit for a James Bond movie, but its objective was efficiency, not espionage. If the sub could beam high-definition, 360-degree images of a turbine back to a technician’s computer screen, it would prove there was a much faster, more efficient and safer way to inspect turbine runners than the traditional approach involving taking units offline, draining the turbines and sending humans into the belly of the beast.

Auger-Habel felt a jangle of nervous excitement as he launched the vehicle toward the idled turbine and returned to his laptop. “We had some doubts, because we were using so many new components,” he says. The engineer piloted the device up to the turbine using a joystick. On his screen were two real-time images: one from the remotely operated vehicle (ROV)’s onboard camera, which served as a kind of underwater dashcam, and the other from the probe, which trailed behind on a tether. Within minutes, the computer screen displayed a crisp image of the runner blades, glinting in the refection of the ROV’s headlights. 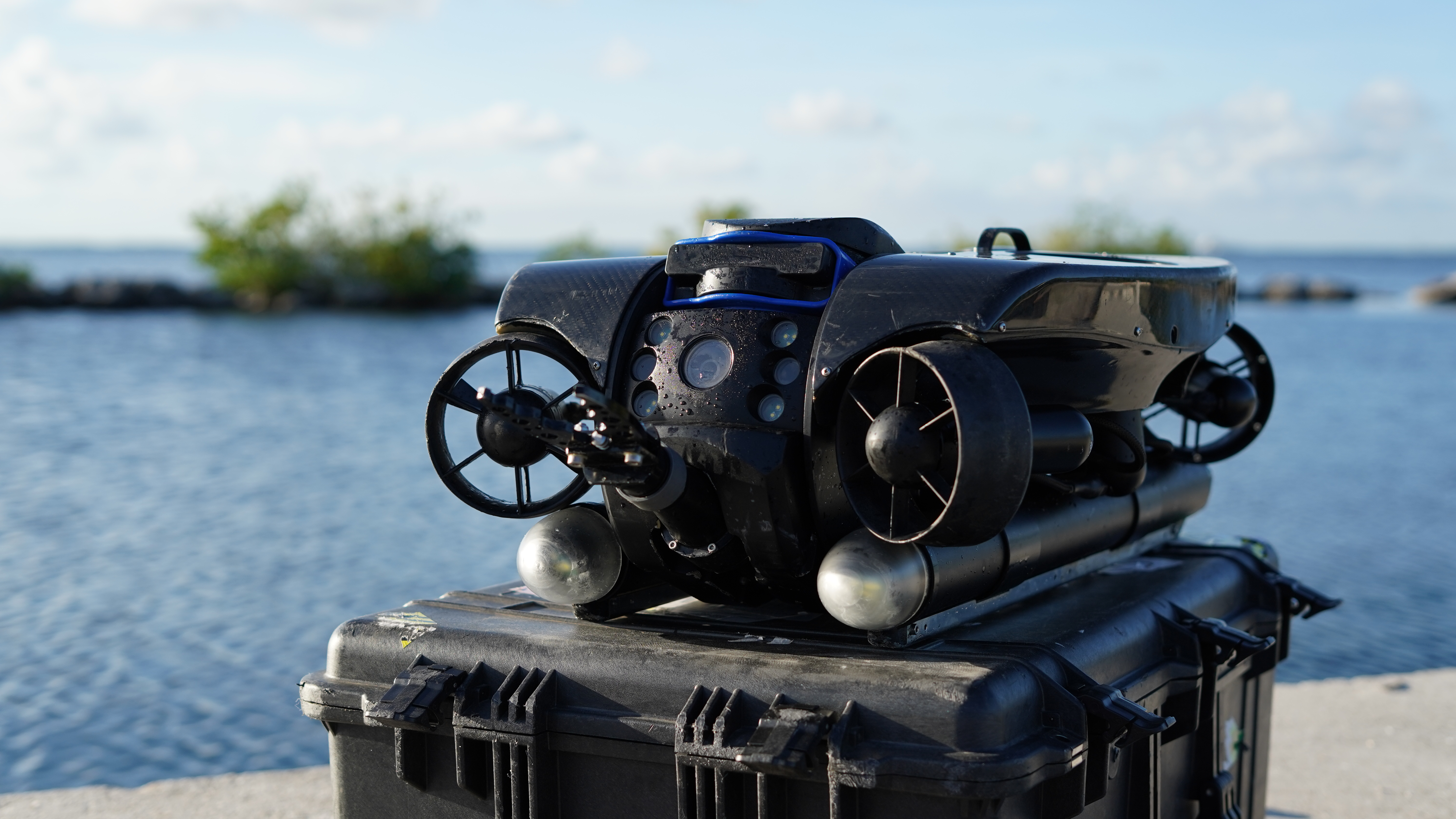 With the ROV treading water, it was time to use the inspection probe. Auger-Habel guided the camera and light module between two of the runner blades. Mission accomplished: engineers could now inspect every last inch of the hydromechanical system without leaving their chairs, let alone getting wet and cold. The image quality was stunning. “It really was a big surprise, to see so clearly. It was easier to float the probe than to crawl and squeeze my head between the blades as I’ve done during previous inspections,” he says.

Back in the office, the engineers were impressed. “The images were so clear, people thought it was photoshopped,” Auger-Habel says. “We had to show the customer videos with fish swimming across to prove it was actually an underwater inspection.” Using the ROV, Auger-Habel completed inspections for all three turbines at the plant in just three days.

"The test was a great success,” says Olivier Teller, a Grenoble-based product manager at GE’s Hydro Solutions. “We showed we can inspect a turbine without dewatering it. It also took less than one day to carry out each inspection, rather than one to three weeks.”

Teller says power producers typically inspect their turbines every few years for signs of damage caused by foreign bodies and cavitation. But dewatering the turbine to allow a detailed examination can be a Herculean labor. Engineers first block the upstream and downstream valves, plugging the reservoirs above and below the turbine. Then they drain off the turbine’s residual water and erect platforms under the runner, allowing them to climb inside the turbine itself. “It’s very expensive and time-consuming,” says Teller. “The platforms are not the easiest things to install; there are inherent risks to performing the inspection. The technicians crawl in a dark, confined space, fighting water leakages in a hostile environment.”

During previous inspections the ROV had beamed back images of a gaping hole in one of the turbine’s trash racks, the giant sieves that prevent waterborne debris from entering the system. “Those holes are normally about 10 centimeters by 30 centimeters wide,” Auger-Habel explains. “This one was 1 meter by 1 meter.” Had the perforation gone undetected, the customer risked damages worth hundreds of thousands of dollars or worse. “Just think,” he says, “the customer wouldn’t even have done this inspection if we didn’t have this solution, because traditional dewatering or diving operations were impractical.” The solution is not an incremental improvement — it totally redefines the approach to turbine condition assessment. 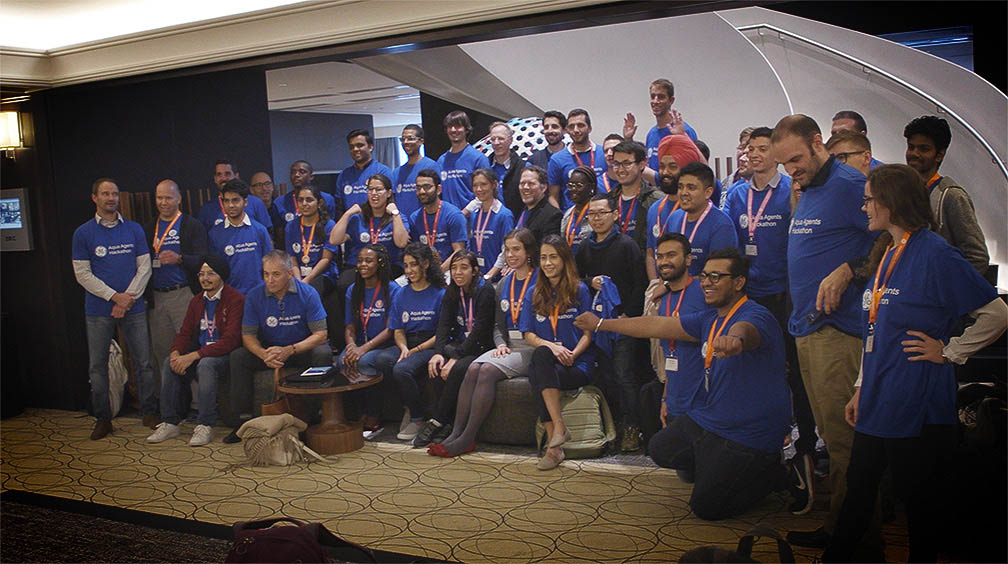 The ROV solution had been two years in the making. An autonomous swimming robot that could scan submerged turbines for defects was the winning idea of a hackathon organized by GE Renewable Energy in Montreal in September 2019. The winning team, who nicknamed their concept “Yellow Submarine,” proposed using ultrasound to sound out turbine wheels for cracks and then use the information to build a digital model of the asset.

Pascal Radue, who heads up GE Renewable Energy’s Hydro division and presented the hackathon’s main prize, had challenged the team to build a viable product in less than six months. Fortunately, Teller is an expert in getting objects to move faster. Before joining GE, he worked for the European Organization for Nuclear Research (CERN), the organization that built the Large Hadron Collider, a giant particle accelerator buried deep beneath the Jura Mountains on the border of France and Switzerland. He reached out to colleagues at GE Research headquarters in Niskayuna, New York, which has a track record of building inspection technology for other businesses. “We wanted to benefit from their expertise on both technology and commercialization,” he explains.  (You can see a video of the hackathon here.)

GE Research agreed to pitch in, and Teller’s team suddenly found themselves on a fast track, leveraging robotic inspection solutions used in the aviation and wind industries. Their first job was to define realistic goals for the project. Instead of building a miniature, sonar-enhanced robot, the engineers began exploring the idea of a smaller module tethered to the ROV itself: the tiny camera probe. “It looks a bit like a snake that is always floating above the ROV,” explains Teller. They designed the probe with lights illuminating the dark turbine interior and lasers measuring distances. “The lasers give us an indication of damage size and help navigation,” Teller says.

The team also created software so that technicians can see both the vehicle’s navigation image and the probe’s 360-degree image simultaneously. “That allows us to keep track of our location in space at all times,” Auger-Habel explains. They also incorporated artificial intelligence that enables technicians to efficiently locate any damage and keep track of inspected areas. To the human eye, every blade looks the same, but software can associate a small defect to a specific blade and map the area being inspected.

It took six months to develop the prototype, and they turned it into a commercial product this year using the market’s latest and greatest technology. Auger-Habel says the device eliminates the need to dewater for inspections. “With reduced outage time, cost and risk, customers who relinquished an inspection now just have an enthusiastic ‘Yes, let’s do it.’”