Crews in California are fighting another deadly wave of wildfires, which have killed and injured dozens of people, burned millions of acres and destroyed thousands of structures. In December, for example, the Skirball fire closed the 405 Freeway, a major traffic artery linking Los Angeles with the San Fernando Valley, and burned homes in Bel-Air, one of the nation’s poshest neighborhoods. “This is kind of the new normal,” Gov. Jerry Brown told reporters at a news conference. “We’re facing a new reality in this state, where fires threaten people’s lives, their property, their neighborhoods and, of course, billions and billions of dollars.”

State and local departments have dispatched thousands of men and women to fight the fires on the ground, but also from the air. One weapon in the Los Angeles County Fire Department’s arsenal is the Firehawk, a modified Black Hawk UH-60 helicopter that can carry 1,000 gallons of water and fly near intense fires.

“These machines are experiencing some of the most extreme conditions you can image on a helicopter,” says Bill Neth, a senior manager at GE Aviation. “Every time the aircraft is fighting fire, it goes to maximum power six to eight times per hour. It must deal with the heat but also the heavy lifting when the tank if full of water. There is no margin for error.” 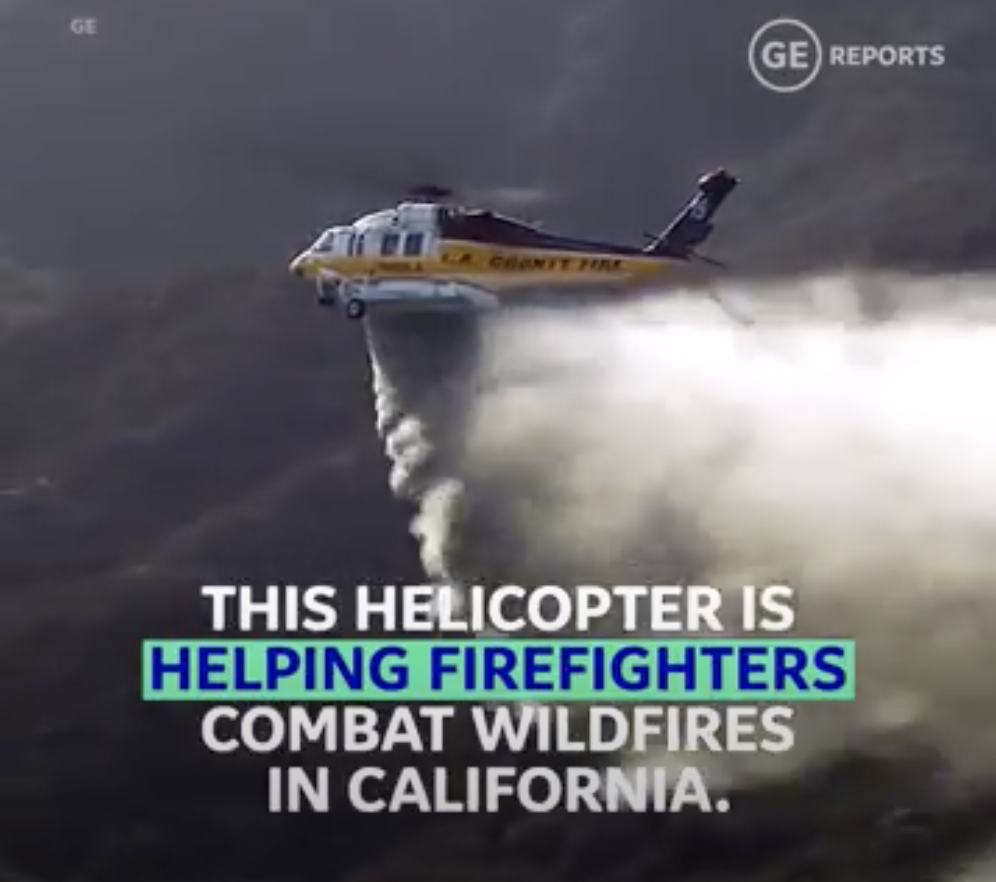 Sikorsky originally developed the chopper for the U.S. Army. But engineers modified the Firehawk, which is powered by a pair of souped-up T700 GE helicopter engines, for firefighting, medical evacuation, and other help and rescue missions.

Neth says that GE Aviation engineers studied Black Hawks that returned from Iraq and Afghanistan to improve the hot section of the engine. They put in parts from advanced nickel alloys and made the engines more resistant to wild temperature swings, airborne debris and degradation from thermal distress. The engine can now withstand extreme conditions and still deliver the necessary power.

The engines also power a pump that can fill up the Firehawk’s enormous water tank in just 1 minute through a retractable snorkel hose while hovering over a water source. The helicopter also can land and ingest water through a connector on the side of the tank.

Earlier this year, GE Aviation received for the first time a rare exemption from the U.S. Federal Aviation Administration to equip a pair of Firehawks used for fighting forest fires in Oregon, Idaho and elsewhere in the Western U.S. with a military version of the T700 engine. Bart Brainerd, president of Firehawk Helicopters, said in a statement that the new engines were able to increase the choppers’ available payload in hot and high conditions by as much as 50 percent and also provide “near instantaneous response to power demands and precision rotor speed control.”

GE has completed 20,000 orders for the T700 and its close cousin, the CT7. They have completed more that 100 million flight-hours, but engineers keep working on making it better. They recently 3D-printed large sections of the CT7, combining some 900 engine components into just 16 and reducing the number of parts by 35 percent. “This is going to change the way the entire world approaches design and production,” says Josh Mook, one of the engineers who worked on the project. “It’s our job to help them figure out how to use this revolutionary technology.”