The principle intended benefit is that employees feel they have the flexibility to take time to bond with their newborns, and to respond to family needs as they arise. The company also hopes to see other flow-on changes: in workforce diversity; and in a work culture that helps both men and women feel that it’s natural to take time out to participate in home life.

In other words, the new leave provisions — 12 weeks paid for primary carers; six weeks paid partner leave in the first two years of a child’s life — along with continuous FTE superannuation throughout periods of unpaid leave and part-time work, are positioned to support whole families. GE leaders are united in developing a company work ethos that complements and draws strength from people’s rich lives outside the corporation.

Daniel Lonard, CT Specialist with GE Healthcare, is already living the dream. He’s on three months paid parental leave as primary carer for Harrison, two-and-a-half, and Hugo, nine months. His partner, Donna, was eager to return to her career in healthcare management; Lonard was keen to support her ambitions and to have concentrated dad time with his sons in the most formative years of their lives. 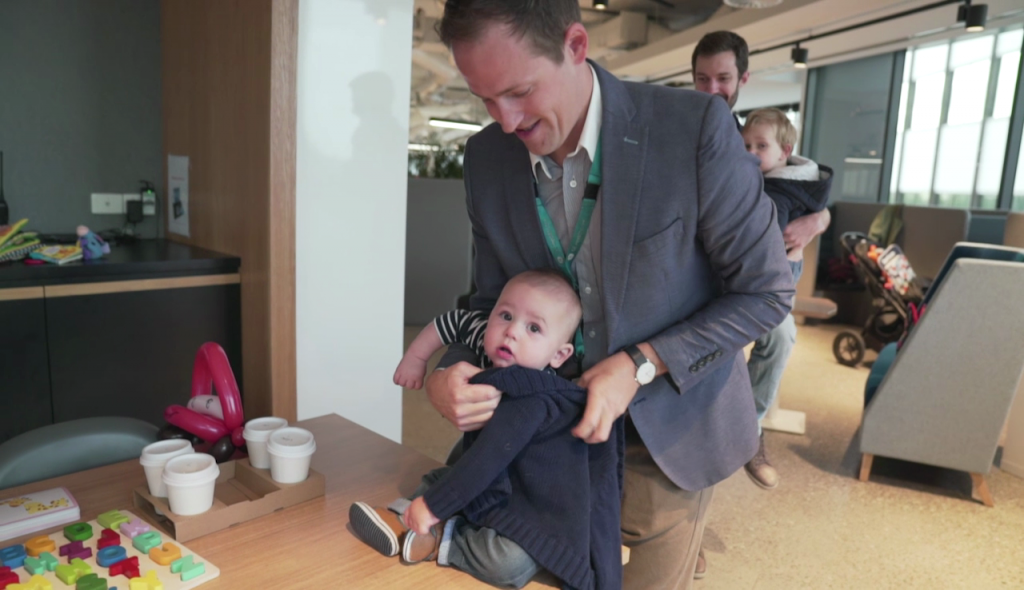 Daniel Lonard, GE Healthcare CT specialist, is taking three months parental leave as primary carer for his two sons.  This family time, says Lonard, should be a "non-negotiable" in your career.


“It’s exciting,” he says, six weeks into full-time parenting, “because they’re both changing almost daily and it’s so good to be involved, to be there during those changes.” But the very best thing, he says, about establishing his own routines, shared experiences and affinity with the boys is the shift in his relationship not only with Harrison and Hugo, but with Donna.

“You would expect that having time at home is going to improve your relationship with the kids, but when I actually did it, it went way beyond my expectations. That improved relationship strengthens the stability of our family. I understand the kids better, which takes pressure off Donna. And the boys know they can get anything they need from each of their parents.”

Lonard hopes to maintain routines such as shopping for fresh food at the markets as things the boys like to do with him, when he returns to a nine-day fortnight.

Jessica Power’s second baby, Eve, is five weeks old, alert and adorable. In Power’s role as lead media relations and energy communications manager for GE ANZ, she positions GE with stakeholders, including media, partners, customers and policy makers. “It’s a real buzz, working on a range of subject matters such as renewable-energy and innovation policy,” she says.

When Power initially paused her career to spend time with her first-born, Charlie, now a cheeky, curious two-and-a-half-year-old, GE’s parental leave provisions were already generous and she appreciates the flexibility the company has allowed her in returning to work part time before Eve came along. But Power was among the many women who had no choice other than to take a corresponding drop in superannuation payments with every day she spent as an at-home mum. 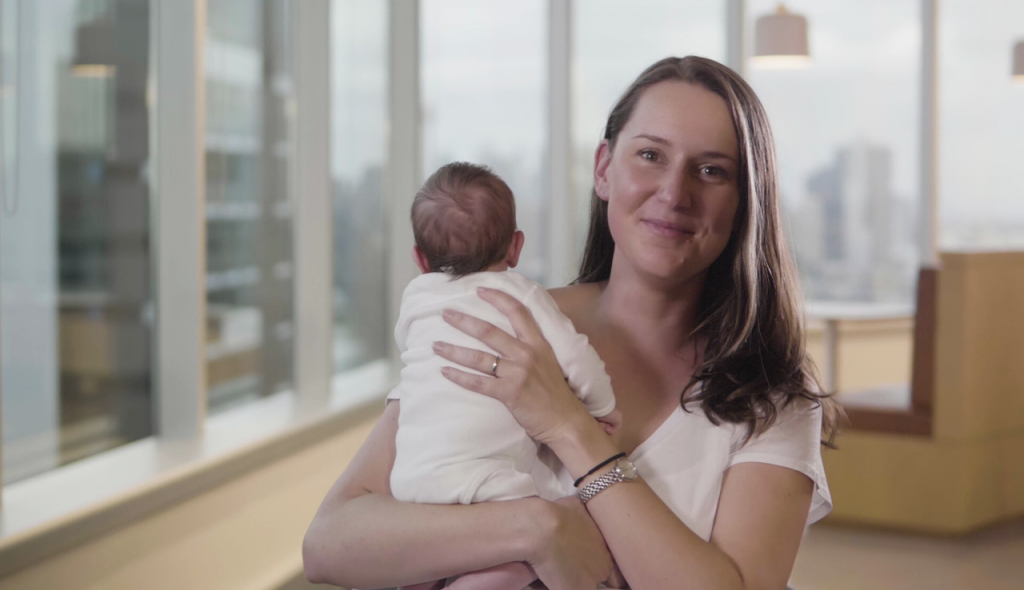 "It’s really reassuring that I won’t be financially disadvantaged in the long term to care for my children," says Jessica Power, GE communications manager, of the new families policy, which includes company superannuation contributions during unpaid leave.


According to numerous sources including Industry Superfunds, women in Australia retire with 47% less superannuation than their male counterparts, and a large (non)-contributing factor is the time many women take out from work to care for their children. When Rebecca Good ran the figures for female employees at GE, she found the company statistics were in line with the norm. The numbers also showed that a relatively small commitment from GE, in continuing to pay FTE super, would greatly enhance the retirement balance of every parental leave taker.

“Based on calculations by our actuary, a 30-year-old employee at GE can expect to increase their super balance at retirement by around $55,000, as a result of one year of additional super contributions — assuming that’s compounded with investment returns at 6% per annum to age 65,” says Good.

GE’s new commitment to make full-time-equivalent superannuation payments for all parental leave takers, and parents who negotiate flexible work arrangements to care for their kids until those children reach the age of five, has the potential to support every GE family. It will help them balance stimulating work with precious time with their children from cradle to kindergarten.

Of the new provisions Power says, “Being able to take time out and still grow my super is a really big benefit.” 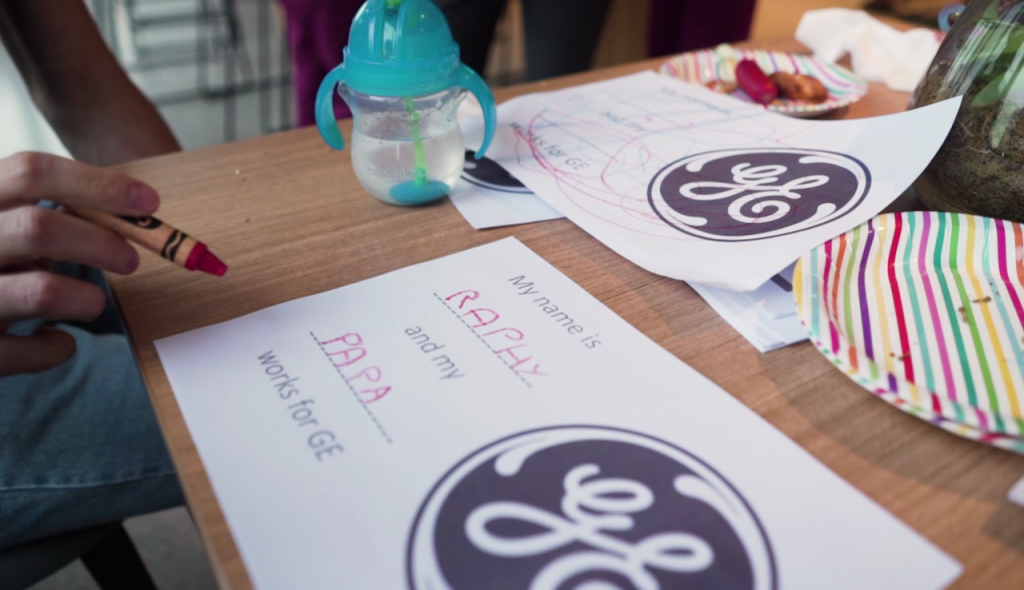 Shifting perceptions in line with desires

Daniel Lonard says his male friends’ reactions to his decision to spend three months as primary child carer has been overwhelmingly wistful: “The main response is, ‘I wish I could do that.’”

Even so, GE isn’t assuming that more men will instantly grasp the enhanced opportunity to play a bigger part in their children’s lives and support their partners’ career ambitions.

Men can still feel stigmatised about taking time out from their careers, says Good, and GE is poised to shift those perceptions, both for men with young families and for their managers. “We need to give guidance to managers, so when someone does come to them to talk about taking extended parental leave or working part time for a while, they know how to discuss the options,” she says.

Good believes managers will be open to organising teams around flexible work practices if they have a suite of practical solutions at their fingertips.

Lonard points out some less obvious benefits of developing a more fluid workforce: “My prolonged absence has given other people in the organisation opportunities to step up into new roles, grow their capabilities, experience new responsibilities, and that’s good for GE.”

He also thinks that the more men who take extended parental leave, the more empathy there will be in the workplace overall for the experience of asking for maternity or paternity leave, asking for flexible work arrangements, putting work on hold and returning, or returning part-time. “More empathy in the workplace around these issues is definitely going to make it a better environment for everyone,” says Lonard.

“We think about being equal as parents, but for men to step into that parenting role at home is so important,” says Lonard because it also supports equality of aspiration and career development — “My partner and I both have careers, we both enjoy the intellectual stimulation that work brings”.

He doesn’t pretend to have all the answers, but he says that redefining equality is more rewarding than he ever imagined.