Long reliant on coal to make electricity, Australia is increasingly looking to renewable sources like wind and solar. But generating reliable, renewable power demands shoring up the grid when the breeze won’t blow and the sun won’t shine — and natural gas power is an efficient dispatchable power that can backstop these sources, and help immediately reduce emissions from coal-fired power.

That’s why projects like EnergyAustralia’s new Tallawarra B Power Station in New South Wales, just south of Sydney, are critical to Australia’s seismic clean-energy transformation. This so-called “peaker” plant — powered by a GE 9F.05 gas turbine — will smooth supply gaps by generating approximately 316 megawatts of quickly dispatchable power, enough to light the equivalent of 150,000 Australian homes, and partially replace 1.7 gigawatts lost when a nearby coal-fired power station shutters in 2023.

Unlike the rest of GE’s installed F-class fleet — which has clocked 24 million operating hours across 40 countries — Tallawarra’s gas turbine will be the first 9F unit to run on a blend of natural gas and hydrogen. When combined with air and burned, hydrogen, the universe’s most abundant element, can drive a modern gas turbine, reducing carbon emissions potentially down to zero. More than 75 GE turbines have racked up 6 million hours burning hydrogen or low BTU fuels, including waste products from steel mills and refineries.

Backed by $83 million from the Australian government and the New South Wales federal state (about US$64 million), Tallawarra B will also be the first gas project built in more than a decade. It also promises to be a foundational customer for a potentially powerful hydrogen-supply hub.

“Hydrogen is quickly emerging as a major economic opportunity for our state, and this investment will keep us ahead of the curve by positioning New South Wales as a world leader in hydrogen production,” says NSW Treasurer Dominic Perrottet.

Bathed in sunshine and filled with windy, open spaces, Australia is on a path to generate 41% of its electricity from renewable sources by 2030, up from 27% today. Hydrogen production, with 20 new projects in development countrywide, will help fuel this growth further. 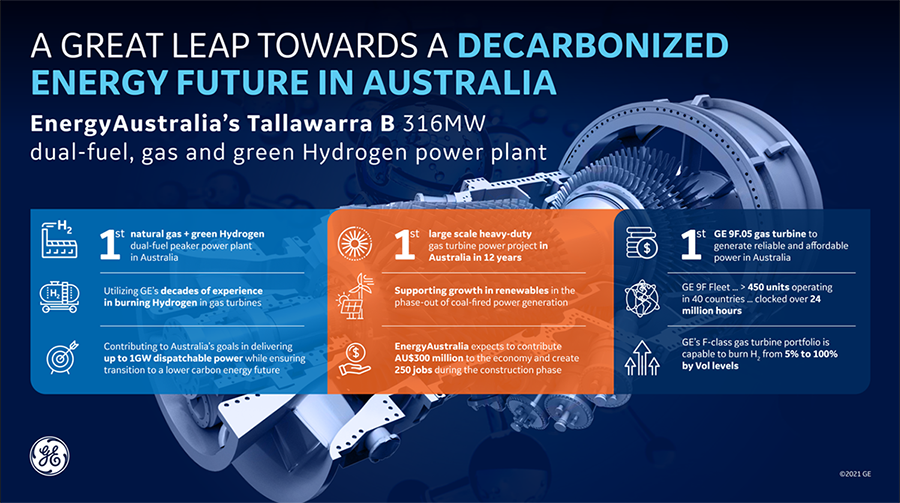 By far the most ambitious effort is the Asian Renewable Energy Hub, funded by $22 billion from a consortium of four renewable producers. The AREH calls for 1,600 wind turbines and 78 square kilometers of solar panels in the western Pilbara region. Expected to launch in 2025, it’s anticipated that the massive installation will generate 26 GW, more than Australia’s entire coal-fired fleet, of which 14 GW will be used to convert desalinated seawater into “green” hydrogen via electrolysis. In this process, an electric current — itself derived from a renewable power source — splits water to produce oxygen and hydrogen.

Expensive as it is to wrench molecules apart, wind and solar installations can use surplus electricity on windy, sunny days to make hydrogen, effectively turning the gas into a battery and reducing production costs. Over time and with scale, producers aim to drive the cost of hydrogen close to $1 per kilogram, competitive with fossil fuels.

But exporting hydrogen in large quantities, as Australia has done with liquid natural gas, could be the next step. “Australia wants to be the hydrogen supply depot to Asia,” says Jeff Goldmeer, emerging technologies director at GE Gas Power. “But to do it, they have to anchor their own demand.”

Little surprise, then, that many eyes are on Tallawarra. Under its funding arrangement, the plant will buy 200,000 tons of green hydrogen per year, initially 5% of the turbine’s overall fuel mix. Boosting that hydrogen concentration (along with shelling out for carbon-offset permits) will help EnergyAustralia meet its commitment to achieving net-zero carbon emissions over the life of the plant.

“This project sets a new benchmark for how gas generators can be consistent with NSW’s plan to be net-zero by 2050 by using green hydrogen and offsetting residual emissions,” says Matt Kean, New South Wales Minister for Energy and Environment.

At the same time, hydrogen invites a variety of challenges in power generation. When burned, hydrogen’s hungry flames can speed back toward a turbine’s fuel nozzles, damaging the equipment (a pesky phenomenon called “flame holding”).

Tallawarra’s 9F gas turbine can burn a fuel mix with up to 18% hydrogen when outfitted with GE’s DLN 2.6+ combustion system. Meanwhile, upgrades enabling even higher hydrogen concentrations — up to 100% — are possible today with GE’s MNQC combustor and, in the future, with next-generation DLN combustion technology already in development.

“It will likely take years to build out the hydrogen-supply infrastructure,” Goldmeer says. “By then, we’ll have newer combustion technology ready for them. However, for now, gas-fired power is already playing a significant role in achieving carbon reduction goals at scale. Gas is already providing affordable power and it is also helping backstop the growth of intermittent energy sources like wind and solar around the world. The solution for the power sector will not be an either-or decision between renewables and natural gas. It will require a multipronged approach to decarbonization with renewables and natural gas power at its core. A decade of actions has started.”