When Edith Clarke was born, the odds that she would one day join a group of celebrated inventors including Thomas Edison, Nikola Tesla, the Wright Brothers and Alexander Graham Bell seemed microscopic. She lived in a pre-computer era when the few women with science education worked mostly as “human computers,” helping their male colleagues solve labor-intensive equations. But Clarke, who was the first woman to receive a degree in electrical engineering from the Massachusetts Institute of Technology (MIT), rebelled against that reality. “I had always wanted to be an engineer, but felt that women were not supposed to be doing things like studying engineering,” she told The Dallas Morning News.

But she did it anyway and in 2015, Clarke got the last of her many satisfactions. She was elected into the National Inventors Hall of Fame (NIHF), a rarefied group of some 500 engineers and scientists whose technological achievements have changed the U.S. and beyond. “In effect, she wrote what now would be called software for machines that set the stage for electronic digital computers,” says James E. Brittain in an early profile of Clarke, who alternated between roles at GE and in academia throughout her career.

Clarke, who was born in 1883, grew up on a farm near Ellicott City, outside Baltimore, Maryland. There were eight other kids in the busy household. As a small girl, Edith “suffered from what probably now would be diagnosed as a ‘learning disability’ in reading and spelling,” Brittain writes, “but she exhibited a good aptitude for mathematics and card games, especially duplicate whist.”

Hers was a tragic childhood. Edith’s father died when she was 7 and her mother when she turned 12. Edith’s uncle, who served as her legal guardian, sent her to a boarding school in Maryland. But when she turned 18, she received a little money from her parents’ estate and used it to pay for tuition at Vassar College in Poughkeepsie, New York.

At Vassar, she studied math and astronomy, and after graduation joined AT&T as a “computer.” She became part of the company’s effort to build the first transcontinental telephone line from New York to California, but was still drawn to engineering. So in 1918, she enrolled as a graduate student in electrical engineering at MIT.

After graduation in 1919, she found a job at GE in Schenectady. America was rapidly electrifying and Clarke filed her first patent for a “graphical calculator” to improve methods for solving complicated power transmission problems over distances as long as 250 miles. “She was the one of the engineers who really understood and expanded Charles Steinmetz’s equations of alternating current theory,” says Chris Hunter, a GE historian and curator at the Schenectady Museum of Innovation and Science. 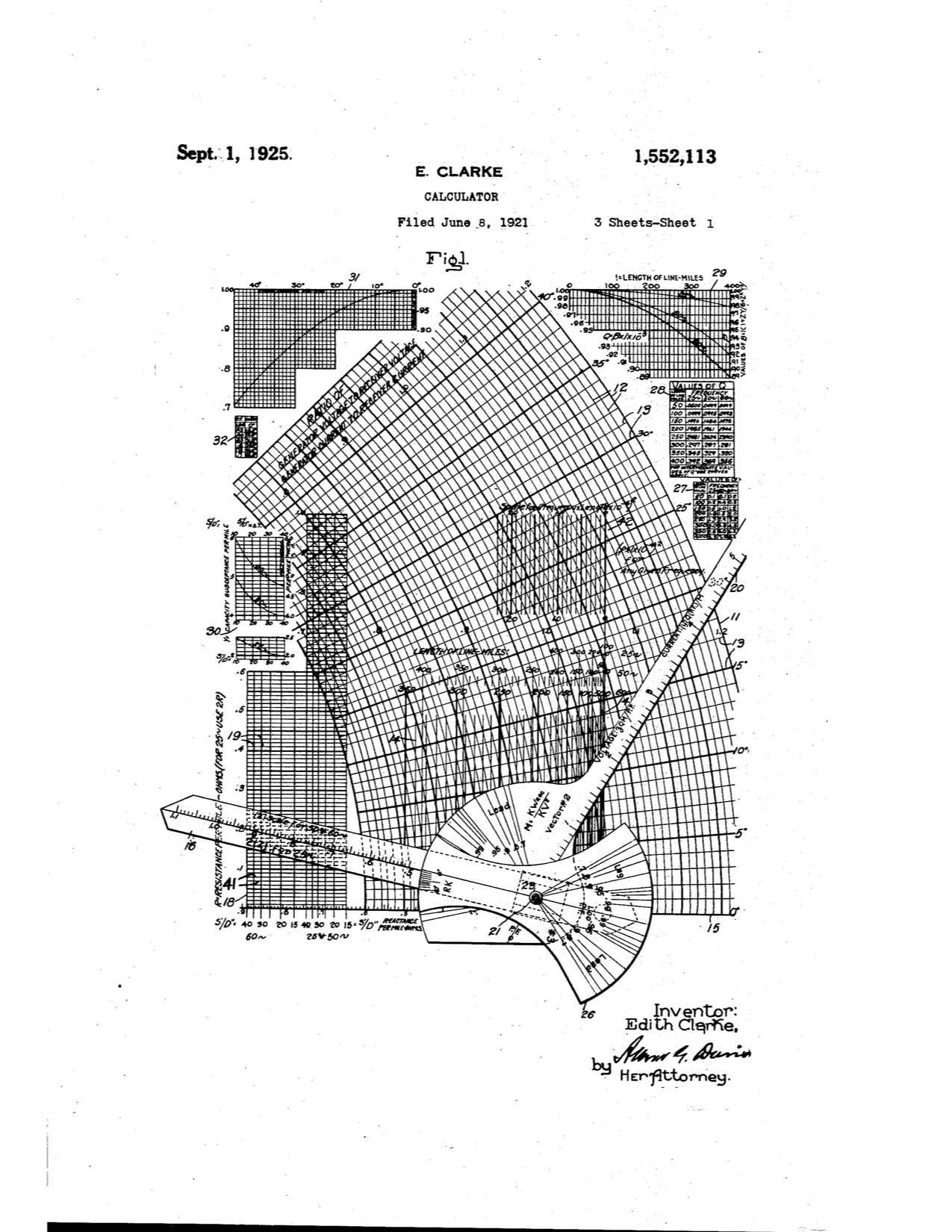 But even a graduate degree from MIT wasn’t enough to free her from the ranks of women computers “calculating mechanical stresses in high-speed turbine rotors,” Brittain writes. So she left her job in 1921 and traveled to Egypt and Istanbul, where she became a professor of physics at the Istanbul Women’s College. 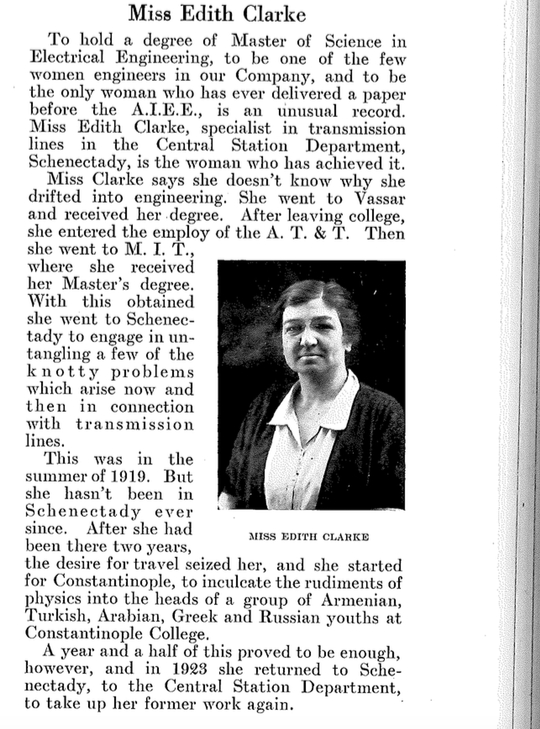 Clarke eventually rejoined GE in 1923, this time as full engineer. The job made her the first woman professionally employed as an electrical engineer in the U.S., according her biography published by NIHF. She also joined the American Institute of Electrical Engineers, where she became the first woman to present a paper and, later, the first woman with full voting rights. The paper, called “Steady-state stability in transmission systems-calculation by means of equivalent circuits or circle diagrams,” apparently held her audience rapt.

Clarke spent the next 25 years at GE, writing papers dealing with power transmission, a crucial topic as electricity became the lifeblood of the industrial world. She was the first person to publish a mathematical examination of power lines longer than 300 miles. She also figured out how to use an analyzer to obtain data about power networks, arguably the first step leading to the smart grid.

“She translated what many engineers found to be esoteric mathematical methods into graphs or simpler forms during a time when power systems were becoming more complex and when the initial efforts were being made to develop electromechanical aids [like computers] to [help with] problem solving,” Brittain writes.

Clarke retired from GE in 1945 and spent the last decade of her life teaching electrical engineering at the University of Texas in Austin. She died in November 1959, in Baltimore.

Clarke is one of 22 engineers and scientists inducted in NIHF who were employed by GE during their career. They are all men, except her and physicist Katherine Blodgett. The list includes Edison; Tesla; Nobel Prize winner Irving Langmuir; Charles Brush, who built the first wind turbine; William Coolidge, who revolutionized the X-ray machine; and Robert Hall and Nick Holonyak, who pioneered LED technology and came close to a Nobel a few years ago. 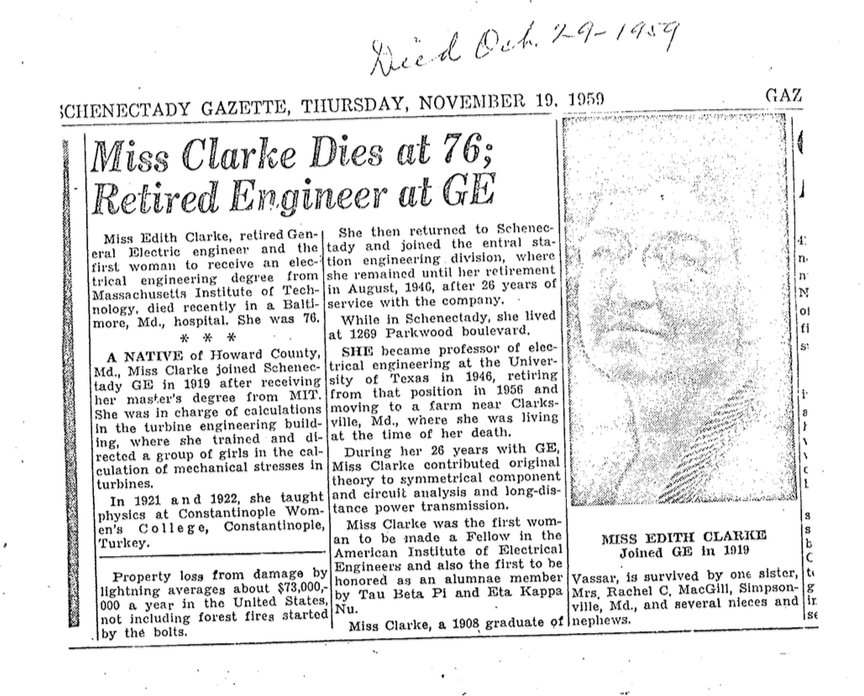