The intriguingly named Quant e-Sportlimousine has been making a splash in Europe, where it was just approved for road use. The electric vehicle can go from 0 to 62 miles per hour in a ridiculous 2.8 seconds, reach a projected top speed of 217 mph, and has a range of 370 miles for one charge, according to its manufacturer, Liechtenstein-based NanoFlowCell AG. Oh, and it’s powered by a saltwater-filled battery.
The vehicle has piqued the interest of GE scientists who are also at work on this so-called flow battery, which uses water-based liquids to store electric charge. “I’m keeping an eye on the NanoFuelCell development,” says Dr. Grigorii Soloveichik, a chemist who is developing the batteries at the GE labs. “Their flow battery car is impressive from the driving range point.”

Unlike traditional batteries, which use solid materials to store and release electricity, flow batteries use charged liquids kept in separate tanks. The charged liquids come into close proximity only during power generation, greatly reducing the possibility of fire. “The safety is much higher and the electrode materials degrade much less during service,” Soloveichik says. “You can re-use them many, many times.” 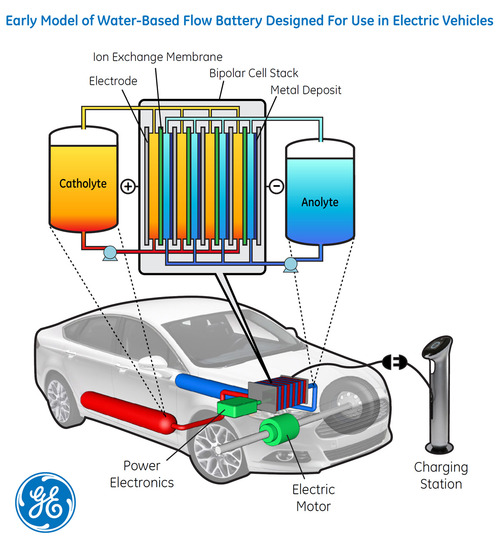 Soloveichik says flow batteries could hold “tens of kilowatt-hours and up” of energy, since it is the size of the tanks that determines how much power the batteries can store. Besides cars, flow batteries could be used as backup power for commercial and residential systems, store electricity from renewable sources of energy, and also support the power grid. “They can store energy from wind, for example, so power companies can use it when they need it,” Soloveichik says.

That could soon come handy. A year ago, California introduced the first energy storage mandate in the U.S., requiring utilities to buy 200 megawatt-hours of energy storage by 2014, and 1,325 megawatt-hours by 2020. The goals include improving grid reliability and capturing and storing more renewable energy. 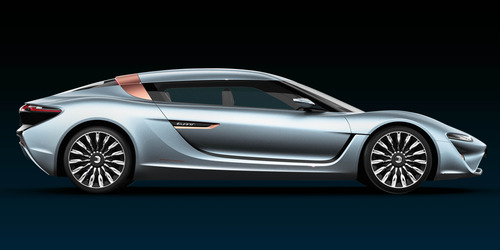 Soloveichik recently published an article in the journal Nature on new flow battery research by a team from Harvard. He wrote that increasing the share of “intermittently available renewable energy sources” like wind and solar to more than 20 percent would require new “cheap and flexible storage systems.” Flow batteries could just do just the trick.

He said that presently, the options are either limited to very specific geographic locations (such as pumping water from a reservoir to an elevated level as a source of potential energy) or expensive solutions (for example, conventional batteries, flywheels and superconductive electromagnetic storage).

Over the last five years, GE researchers have been developing liquid fuels for flow batteries with energy density high enough to possibly power electric cars. The project is part of the DOE-funded Energy Frontier Research Center.

Soloveichik and his team are now working with the Department of Energy’s ARPA-e program to build a water-based battery that could power an electric vehicle for 240 miles.

He and his team have already shown that the ARAP-e target energy density and cost are within reach. They now have to get enough power from the battery chemistry. Says Soloveichik: “This is a game changing technology and we think we can exceed the goal.”