The Daring Do: In The Cockpit With GE’s Chief Test Pilot

If you asked most kids in the 1980s, "Are you an Alan Shepard or a Chuck Yeager?," many would pick America’s first astronaut over the test pilot who became the first human to fly faster than the speed of sound. But from the moment Jon Ohman saw "The Right Stuff," the movie that chronicled America’s race into space, he knew: He was a Yeager all the way. “That movie introduced me to the mystique of test pilots,” Ohman says. “It made me realize as a kid that the world of flight test is where I wanted to be.”

Embracing audacious goals, pushing boundaries and serving a purpose greater than himself — these qualities of Yeager’s captivated Ohman, now 45, and inspired a career that’s taken him from combat pilot in Iraq and Afghanistan to military test pilot to his current position as GE’s top-ranking test pilot.

It’s a job that requires a strong brew of technical acumen, knowledge and courage. At the helm of the company’s sole flying testbed, a modified Boeing 747-400, Ohman leads a crew that takes new engines for a spin — including the world’s largest jet engine, the GE9X. The routine includes a number of stress and aerodynamic tests to ensure their performance, efficiency and — above all — safety.

Ohman sees today’s test pilots as direct descendants of legends such as Yeager and Bob Hoover, men who flew during what Ohman calls “the golden age of flight test.”

“Those guys established what it means to be a test pilot,” Ohman says. “They were pushing the boundaries of what humans were doing in the air. I look back on them with a certain envy that they got to do the sort of flying they were doing.”

Ohman, who grew up in Santa Barbara, California, earned his pilot’s license at 17, then went to college at the U.S. Naval Academy. An irrepressible compulsion to challenge himself led him to the Marine Corps, where he flew F-18s in Iraq and Afghanistan. But his fascination with flight testing never waned. “To do things in the air that have never been done before, to be on the cutting edge of aircraft, systems and engine development, is exciting,” he says.

So after 10 years as a fighter pilot, Ohman applied to test pilot school at the Naval Air Warfare Center in Maryland. He spent the second half of his military career testing both the legacy F-18 and the Super Hornet, as well as the F-35, the Corps’ new fighter jet.

GE recruited Ohman after he retired from the military in 2015. “I was familiar with GE Aviation because the engines on the F-18s are manufactured by GE,” he says. “What they were doing in flight test sounded like it would be exciting and rewarding. It allowed me to continue doing two things I love: flying and flight test.”

For Ohman, it wasn’t just a career move — it was a calling. “Almost all pilots are aviation historians to a certain extent,” Ohman says. “We all grew up with these heroes who were pioneers in flying airplanes. I think that is part of what attracted me to flight test: the mystique and the ability to be on the forefront of aviation.”

In March, Ohman became part of aviation history when he was the first pilot ever to fly GE’s new monster engine, the GE9X, a commercial engine designed for the Boeing 777x. It is the largest jet engine GE has ever produced. “It was certainly exciting to be the first person to fly the largest engine in the world, to be part of an aviation first,” Ohman says. “But it’s a really humbling experience, too. That first flight is the result of a monumental amount of work by thousands of people over years and years, and I get to be the guy who sits in the cockpit and pushes that throttle up for the first time.”

Above: In March, Jon Ohman became part of aviation history when he was the first pilot ever to fly GE’s new monster engine, the GE9X, the largest jet engine GE has ever produced. Image credit: GE Aviation. Top: “To do things in the air that have never been done before, to be on the cutting edge of aircraft, systems and engine development, is exciting,” Ohman says. Image credit: John Ohman.

After years as a combat and test pilot, Ohman doesn’t get nervous when taking off with a new engine. First, there are three other engines powering the flying testbed. But even more importantly, a big part of the job is mitigating risk before Ohman ever climbs into the cockpit. “I tell [my wife] Amanda and my children that we put a lot of effort into taking the danger out of flight test,” he says. “Much of our job is devoted to reducing risk to a reasonable level.”

Ohman and his crew start working months — and sometimes years — in advance to prepare for a new testing campaign. It begins with a deliberative process that outlines which series of tests must be completed on the ground before the crew takes off with the engine for the first time.

Next, Ohman works with NASA engineers to simulate the weight, mass properties and thrust of the new engine. “We can go fly in their simulator and develop all our tests, and rehearse those tests before we ever do it in the airplane,” he says. “That’s a significant risk mitigator.”

While safety has always been a top concern for Ohman, stretching back to his days as a Marine fighter pilot, there are some significant differences between test flights in the military and with GE. The Boeing 747 testbed, of course, isn’t a fighter jet. Most of its seating has been replaced with computers that allow engineers to measure and modify various engine parameters in flight. “Most test flights in the Marine Corps were done in single-seat fighter jets,” Ohman says. “Now I’ve got a crew of anywhere from 15 to 20 flight test engineers with me on the airplane.” 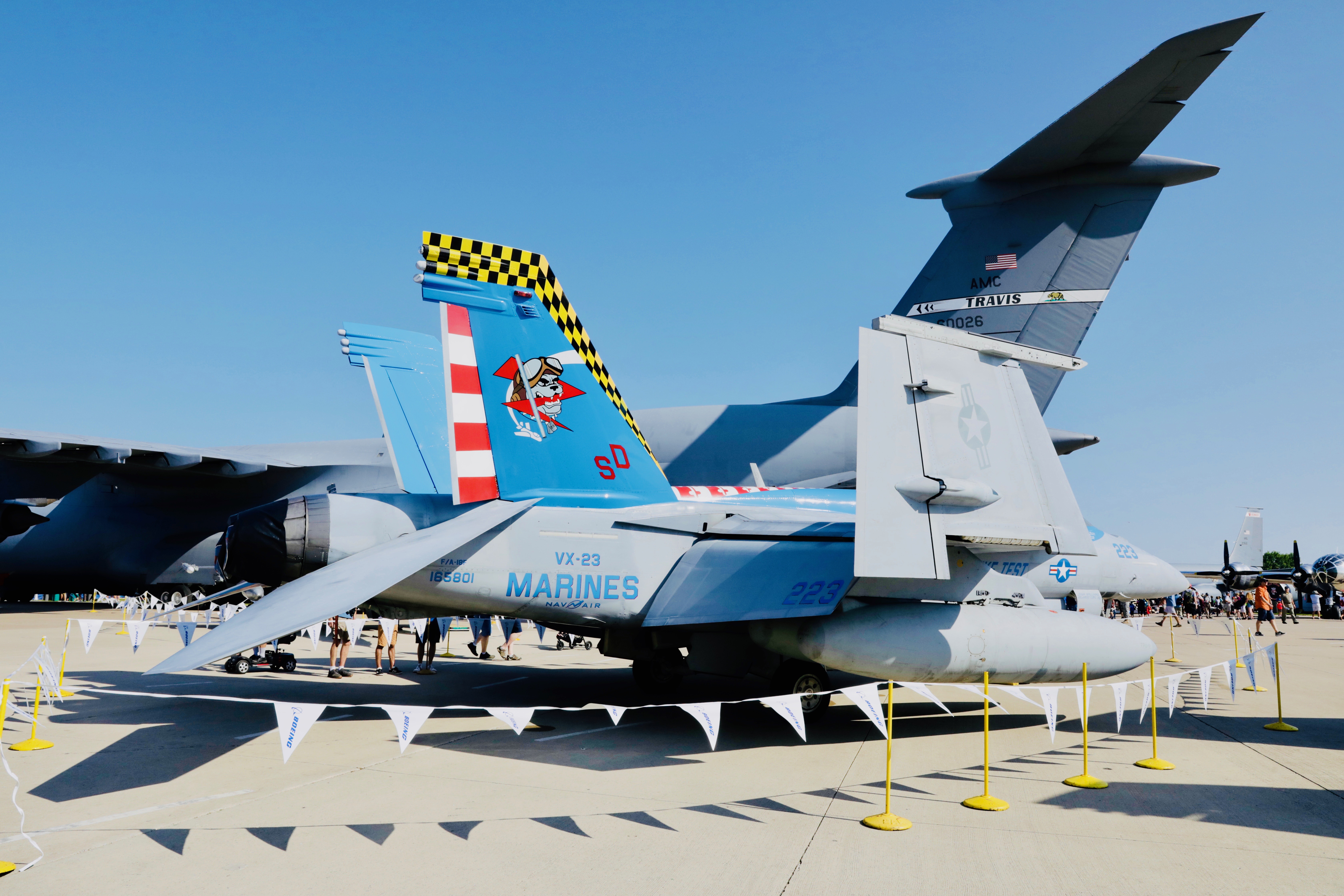 A Marine F-18 at the 2018 EAA AirVenture Oshkosh fly-in last July. “I was familiar with GE Aviation because the engines on the F-18s are manufactured by GE,” Ohman says. Image credit: Tomas Kellner for GE Reports.

Ohman says his children, 12-year-old Jacob and 11-year-old Emily, are reassured by the presence of all those engineers. “I would not be taking the airplane, and certainly not all those people, into the air if it wasn’t safe,” he says.

As his children grow, Ohman occasionally wonders if either of them will be interested in flying themselves. He already knows they’re not afraid to fly. His daughter recently told someone she doesn’t worry about planes because “my daddy tests them and makes sure they’re safe.”

“I love flying airplanes and I love doing flight test — and I really like being part of something that’s bigger than myself,” Ohman says. “It’s tremendously rewarding.” 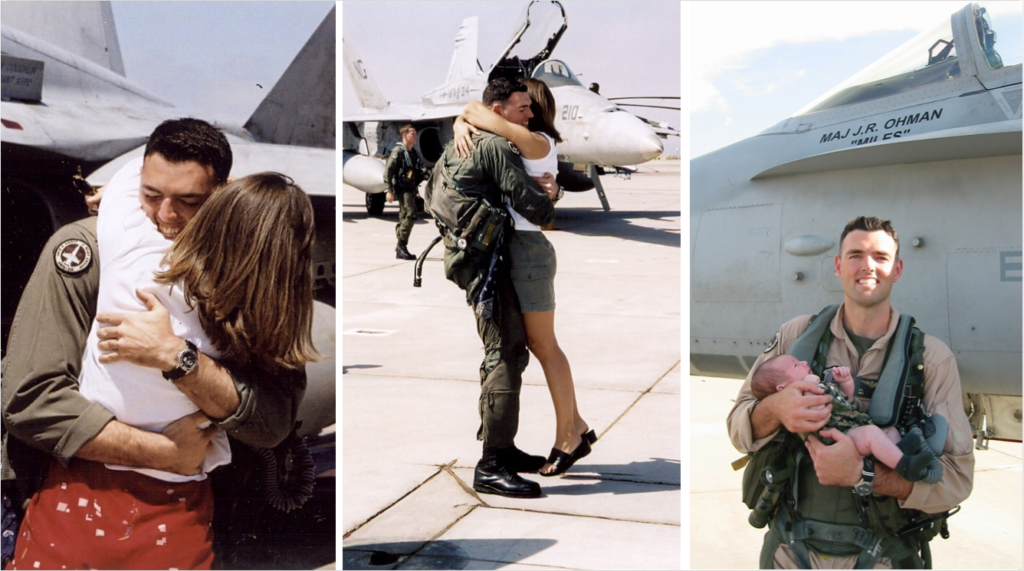