Earlier this week, NASA announced that the Voyager 2 space probe has become only the second object made by humans to leave the solar system — specifically, the protective bubble called the heliosphere, which shelters the planets from galactic cosmic rays — and enter interstellar space. Voyager 1, the probe’s twin, achieved the same feat in 2012, flying on a more direct path. “I think we’re all happy and relieved that the Voyager probes have both operated long enough to make it past this milestone,” said Suzanne Dodd, Voyager project manager at NASA’s Jet Propulsion Laboratory in Pasadena, California. “This is what we've all been waiting for.”

Scientists know that the probe made the historic step because instruments on board detected a sharp drop in solar particles and a steep increase in galactic cosmic radiation. Forty-one years after Voyager 2’s launch, these instruments and other onboard systems are still drawing power from a piece of GE space technology called the radioisotope thermoelectric generator (RTG). The company also helped design the computer command subsystem, the flight control processor and other technology for both Voyager probes, a NASA “backgrounder” shows.

The Voyagers launched in 1977 and were expected to last only a few years. “NASA considered everything past the Saturn encounter a bonus,” said Howard Butler, who ran GE’s Aerospace Electronic Systems Department and managed the development of the command computers for Voyager 2. 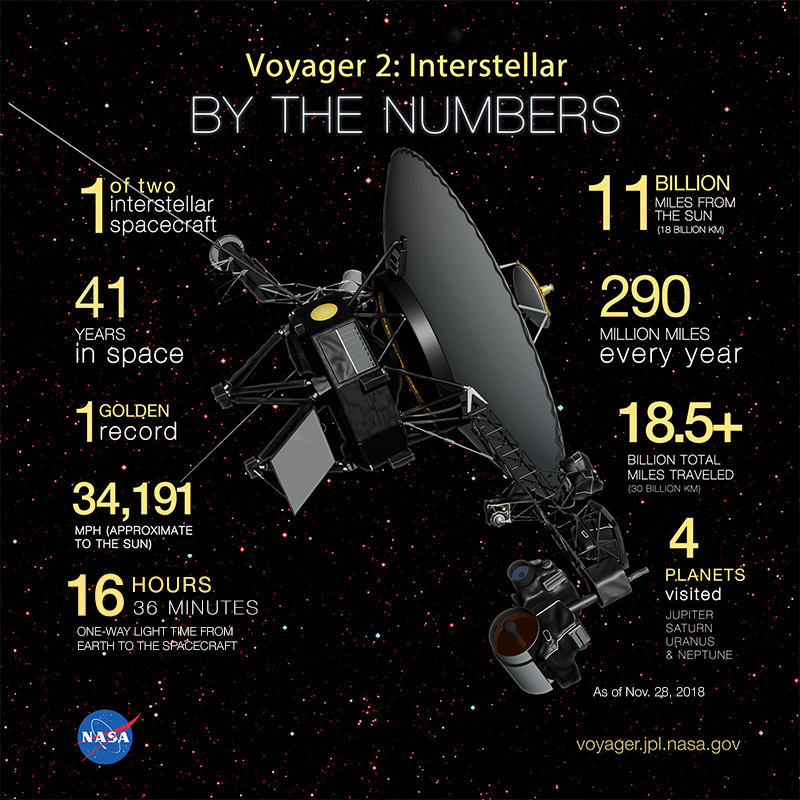 Top: GE's Monogram magazine covered the launch in 1977. Forty-one years later, Voyager 2’s instruments and other onboard systems are still drawing power from GE's radioisotope thermoelectric generator. Image credit: Museum of Innovation and Science Schenectady. Above: Earlier this week, NASA announced that the Voyager 2 space probe has become only the second object made by humans to enter interstellar space. Image credit: NASA.


From its current location 11 billion miles from home, it takes data some 16.5 hours to travel from the probe to the NASA command center. This information comes from instruments measuring cosmic rays, solar plasma, particle energy and other features of the space surrounding it. “Voyager has a very special place for us in our heliophysics fleet,” said Nicola Fox, director of the heliophysics division at NASA headquarters. “Our studies start at the sun and extend out to everything the solar wind touches. To have the Voyagers sending back information about the edge of the sun’s influence gives us an unprecedented glimpse of truly uncharted territory.”

Voyagers also carry cargo designed to communicate a message from Earth to extraterrestrials. Each probe holds a special phonograph record: a 12-inch, encoded, gold-plated copper disc containing music, sounds and images selected to portray the diversity of life and culture on Earth, from Bach and Chuck Berry to birds, heartbeats and laughter.

The probes’ next stop, in about 300 years, will be the Oort cloud, a giant orblike cooler filled with billions of icy objects. Scientists believe that the cloud is the birthplace of long-period comets like the Hale-Bopp, which was visible in the sky in 1997.

A number of other space probes and satellites rely on GE technology. RTGs designed by GE are also working on the New Horizons probe, which zipped past Pluto in 2014 and sent back pictures of snowcapped mountain ranges and vast icy landscapes pockmarked with snow pits. The same technology powered the Cassini-Huygens mission to Saturn.

GE engineers also led the design, integration and testing of the 14-foot, 4,400-pound Landsat 4 and Landsat 5 satellites, which photographed Earth from 1982 until 2012. GE also managed the flight and ground missions of the spacecraft, and GE’s digital image analysis lab in Lanham, Maryland, processed their images to reveal details as small as 30 meters long, such as highways and bridges. In 2012, Landsat 5 entered “Guinness World Records” as the “longest-operating Earth observation satellite.“ The spacecraft was designed for a three-year mission but served for nearly three decades.

GE workers also designed technology for Hexagon and Gambit, some of the largest spy satellites ever built — at 10 feet in diameter and 55 feet in length, each was the size of a tractor trailer. GE engineers worked on recovery vehicles for exposed film, command systems, mission-planning software and other mission-critical systems.

The top-secret spy satellite programs ran from 1963 to 1986. In 1984, President Ronald Reagan commended the engineers and others who worked on the satellites. But the presidential honor remained secret until 2011, when the program was declassified. The Smithsonian National Air and Space Museum put the satellites on display a year later. 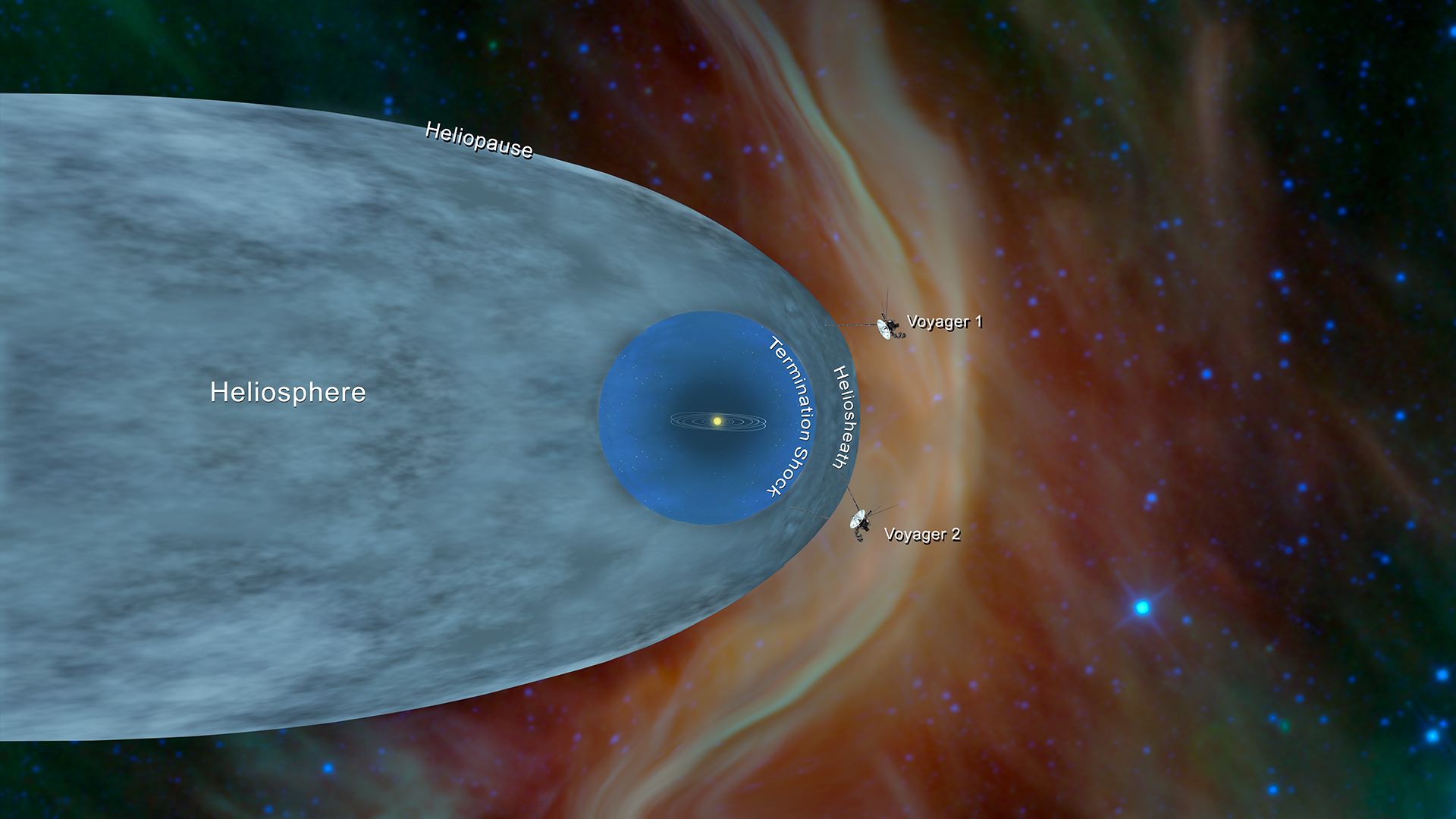 This illustration shows the position of NASA's Voyager 1 and Voyager 2 probes, outside of the heliosphere, a protective bubble created by the Sun that extends well past the orbit of Pluto. Voyager 1 exited the heliosphere in August 2012. Voyager 2 exited at a different location in November 2018. Image and caption credit: NASA/JPL-Caltech.