The Anything Factory: NASCAR Driver Brad Keselowski Is Transforming Manufacturing

As one of the country’s fastest NASCAR drivers, Brad Keselowski has always believed he could get a little more speed out of his car through cutting-edge technology and clever tweaks. As a child, he built race cars with his father and uncle in their Michigan garage. Now he’s taking his tinkering to the next level through 3D printing. In January, he launched his new facility, Keselowski Advanced Manufacturing (KAM), where he’s building bespoke 3D-printed parts that can make an automobile lighter and more aerodynamic — whether it’s a race car or a vintage sedan.

But Keselowski doesn’t stop with cars. He developed KAM to serve a wide range of industries including aerospace, oil and gas, defense, and, eventually, medicine. All of these fields are starting to benefit from 3D printing, also known as additive manufacturing, which allows designers to print, directly from a computer file, intricate metal custom components that were previously too expensive or even impossible to make.

The new 70,000-square-foot facility is based in Statesville, North Carolina, and has partnerships with companies including GE Additive, Pinnacle X-Ray Solutions, Mazak, Alsco and Big Kaiser Precision Tooling. KAM is a full-service shop, meaning a customer can go there with an industrial challenge and the team will develop a solution, digitally engineer a part and then use a combination of additive and traditional techniques to manufacture it.

For instance, a power energy business recently asked KAM to develop a heat-transfer piping component. Typically this piece comprises three parts that have to be built separately in a factory and then fused together — a process that generally takes around four weeks. Where those pieces come together in the finished product, there are often leaks or potential weak spots. KAM designed a single sophisticated part with no connecting points and printed it out in less than two days on one of its two GE Additive Concept Laser M2 machines.

These printers have the capability to mass-produce jet engine parts, spare parts for the beverage industry or medical instruments — really, anything that can be designed on the model software.

“Additive can print almost any shape — and shapes that are definitely not possible by conventional techniques,” says Josh Mook, innovation leader at GE Additive. 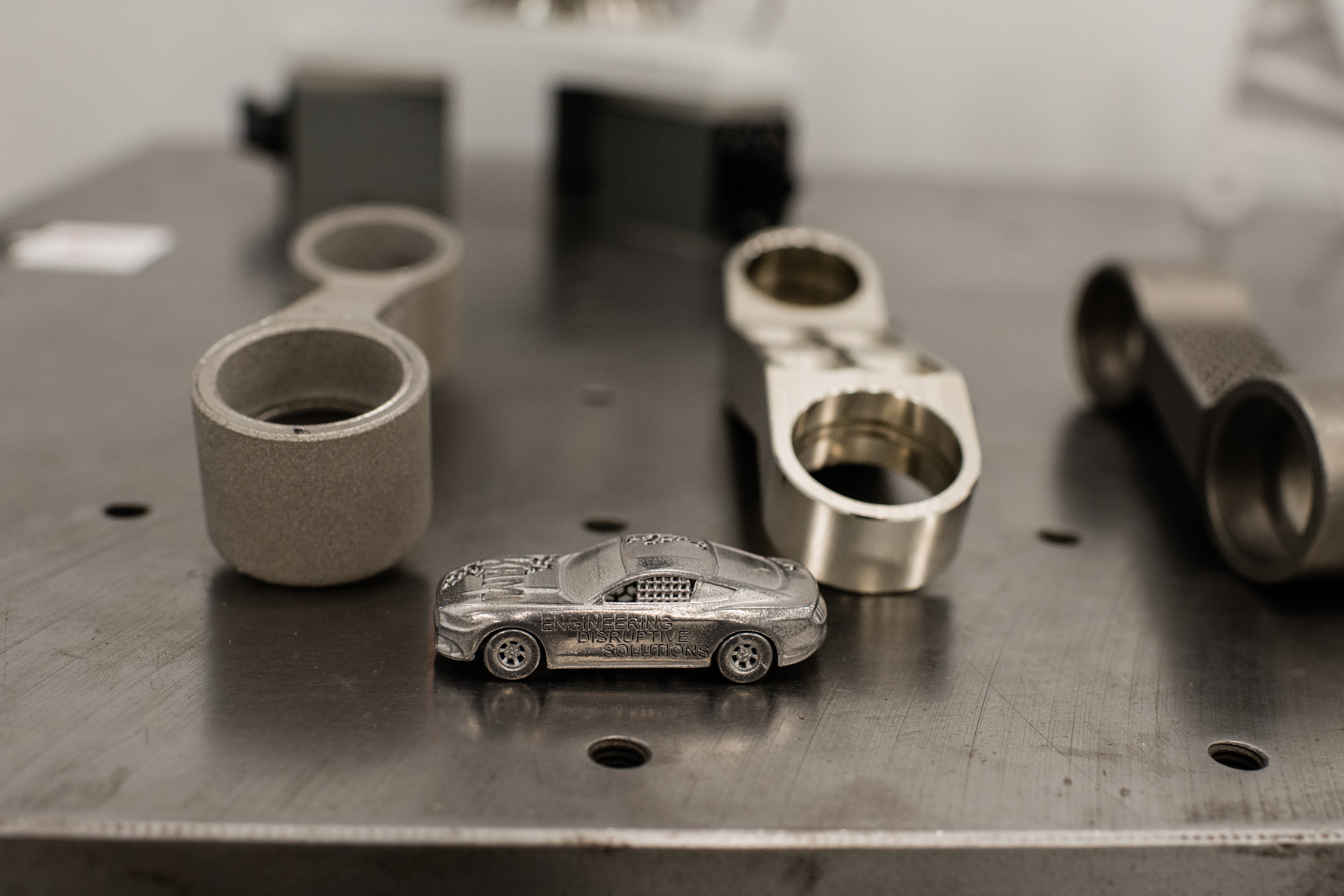 
Mook explains that one single Concept Laser machine contains two lasers to double the speed of production. “In theory you could build many different types of parts on one platform, assuming the same quality requirements,” he says. “It provides a very flexible manufacturing environment, which is what KAM was built for.”

Additive manufacturing machines build parts from the ground up, one thin layer of metal powder after another, rather than chiseling them out of a solid block. Spreading a metal powder like titanium or aluminum upon a platform, the machine’s 400-watt laser fuses the powder in the right shape based on the CAD design and then adds new layers, sometimes many thousands of them, repeating the process until the part is finished.

For the energy company’s heat-transfer component, additive technology enabled KAM’s design team to include hidden passageways and embedded cavities that help with the heat transfer and were far too intricate to make by casting.

But design options and speed aren’t the only advantage 3D printing offers. “This ability to consolidate parts makes it significantly cheaper in the cost of operation,” says Steve Fetch, KAM’s general manager, referring to how this part reduced the separate purchase orders, inventory and assembly that would’ve been required by the traditional three-part order. “You’re basically making the supply chain leaner.”

KAM’s facility focuses on building more than just prototypes for customers, Fetch says. They mass-produce parts just like a traditional factory. “We’re positioning ourselves to have high-volume additive products,” he says.

Mook refers to KAM as an “anything factory” — a factory that can do it all for everyone. “They do hybrid manufacturing, which means their facility uses a blend of additive technology and conventional subtractive capabilities,” he says. “They can make anything for any industry that needs precision and flexibility.” KAM currently has 30 employees — engineers and manufacturing specialists — and plans to expand to 100 by the end of the year.

Keselowski has won 27 NASCAR Series races, was the 2012 Cup Series champion and isn’t quitting his day job anytime soon. Fetch says he made the tactical decision to broaden his offerings early on. “When we looked at how to grow the company, motorsports is a limited market,” Fetch says. “Our long-term vision is to be the No. 1 supplier to large companies that have a high-volume demand for additive products.” 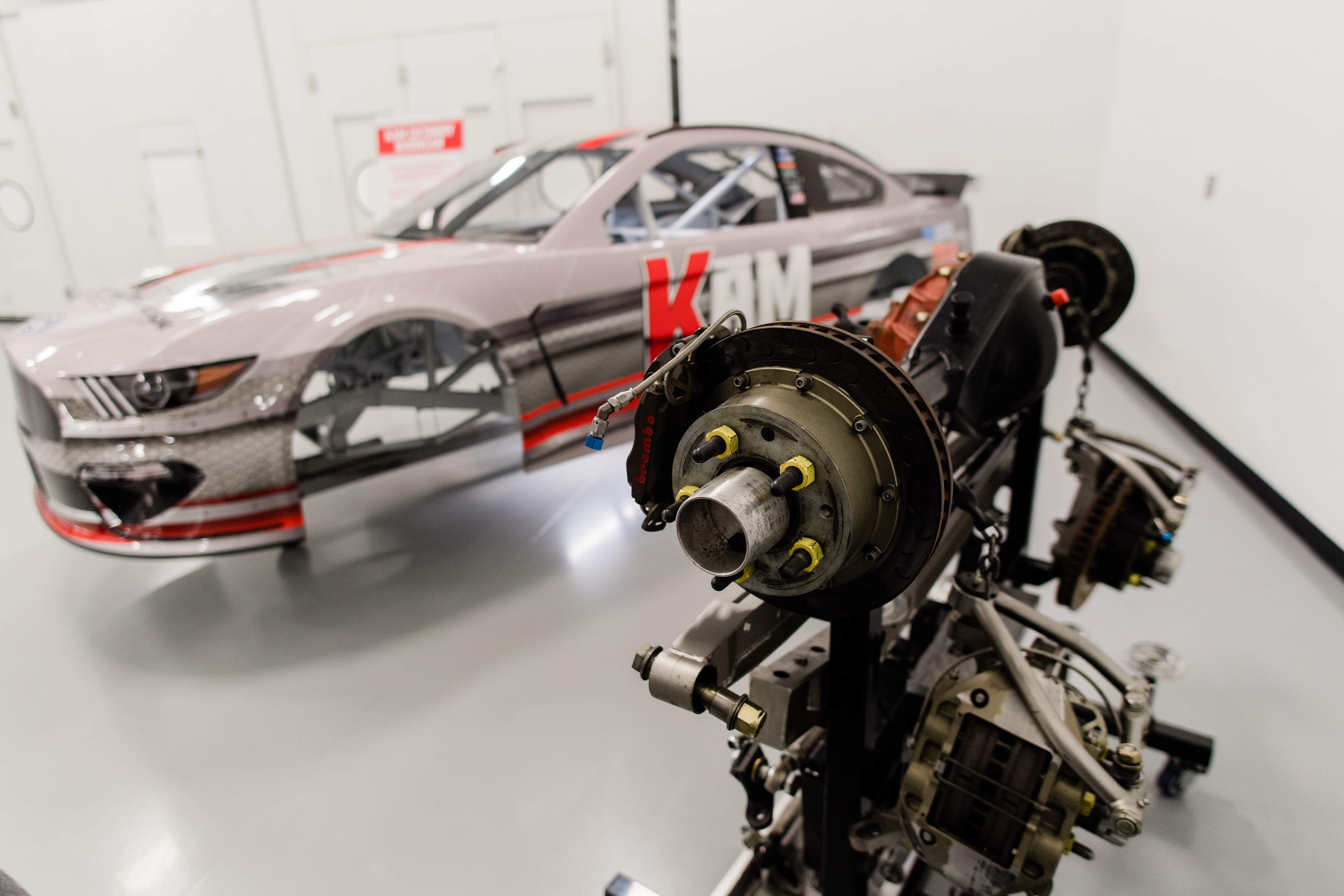 KAM will serve a wide range of industries including aerospace, oil and gas, defense, and, eventually, medicine. Image credit: KAM.