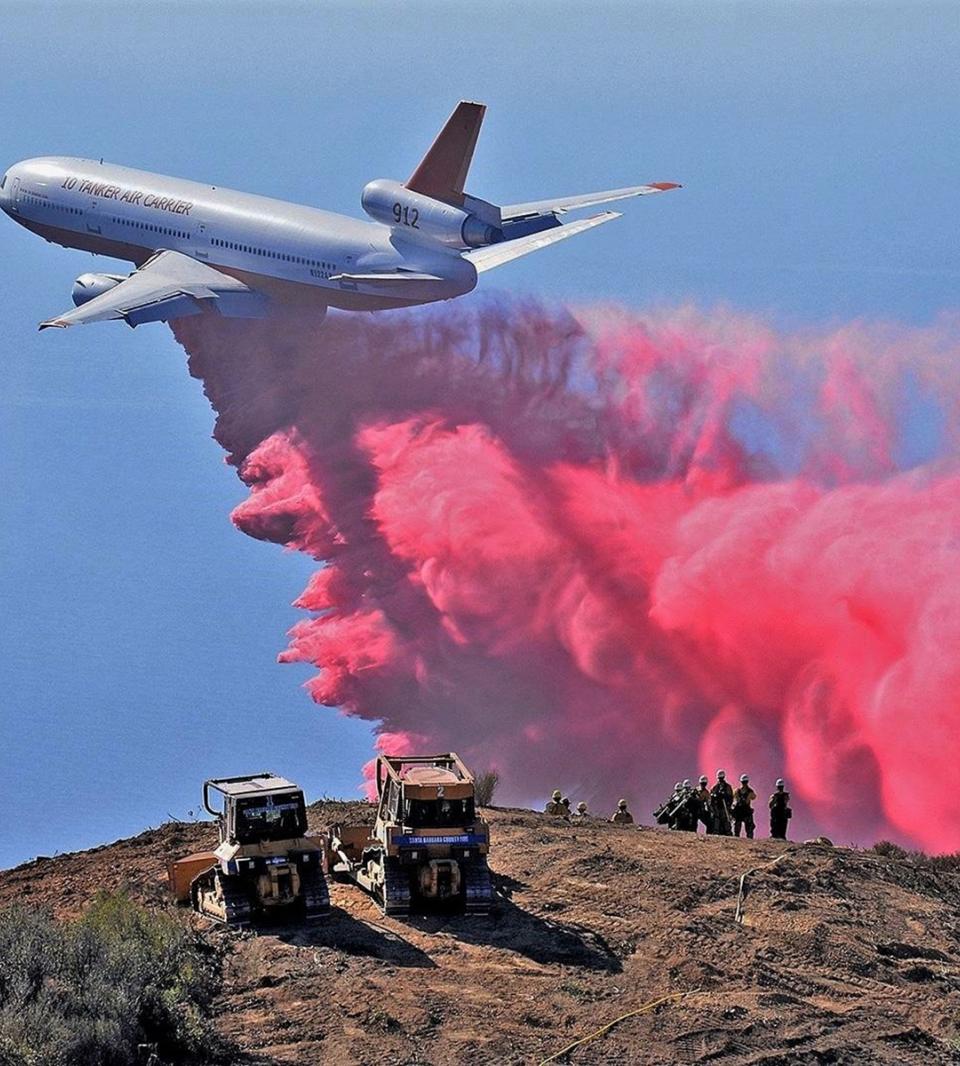 Forest fires have ravaged the western United States this year and no state has had it worse than California. With hundreds of thousands of acres of forestland up in smoke and population centers from Napa Valley to Los Angeles threatened with flames, the state has been forced to call in reinforcements. 10 Tanker, an air carrier company based in New Mexico that specializes in aerial firefighting, has four DC-10 airliners in its fleet, powered by GE’s CF6 engines. The DC-10 was originally designed as a passenger jet and became a frequent sight in the sky in the 1970s and the 1980s. 10 Tanker’s planes have been retrofitted with large belly tanks that can drop up to 9,400 gallons of flame retardant in one go.

To get an idea of what it’s like to fly a large modified commercial jet into a conflagration, we spoke with Kevin Hopf, 10 Tanker’s chief pilot; John Gould, 10 Tanker’s president; and Rick Hatton, founder of the company and a former military pilot with low-level flight experience and a career in aircraft modifications. Hopf has been flying fire missions for the better part of the last two decades. Despite his familiarity with forest fires of various shapes and sizes, Hopf admits, “it’s been kind of a crazy year.”

Here’s an edited version of our conversation.

GE Reports: Where are you right now?

KEVIN HOPF, chief pilot with 10 Tanker: I’m in McClellan [California] right now, where we have two of our airplanes stationed.

GER: Walk us through the process of getting the plane prepped for a mission. What does a typical day look like when you’re working on a fire?

HOPF: In a typical day, like this morning, we’ve got our airplanes here in McClellan at a very large air tanker base, where they can load seven different airplanes at the same time. When we get the call, three hoses are hooked to our airplane. It takes about 12 minutes to fill our 9,400-gallon tank. Up in the front, we’re getting our navigation radios programmed, our communication radios, and by the time they load it, we’re ready to hit the start switch. 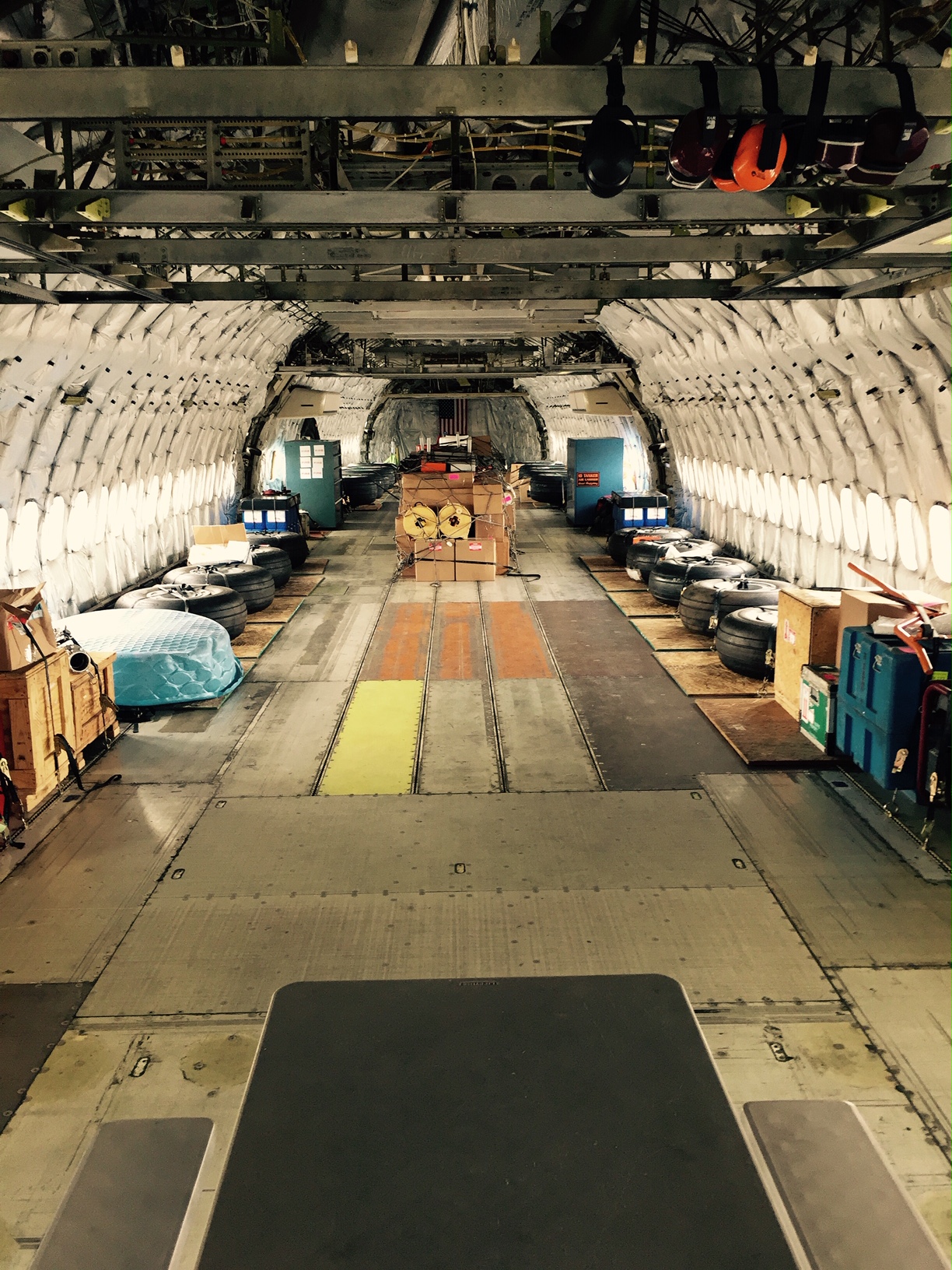 GER: What happens when you arrive near a fire?

HOPF: When a fire is first noticed, an incident commander is assigned. That incident commander is basically running the show. He’s got an aircraft overhead, which is called an air attack platform, and that usually has a pilot and a person very well-versed in firefighting. Those two are constantly giving him information on the fire. Then the lead airplane comes into play. He’s lower than the air attack but he’s talking to both of them. Between those three, they come up with a strategic plan.

When we show up on scene, like, say, 30 miles out, they give us an altitude to go to and they’ll continually separate the inbound airplanes — 500-foot elevation changes for each one of us. As we get closer, they give us a rundown on what we’re going to be doing. Is it going to be up on top of a ridge? Is it supporting a bulldozer line? They’re giving us a really good description of what we’re going to end up doing.

You know, it’s not unusual to see 12 to 15 aerial assets in a 3- to 5-mile area. And if someone sat way up high and just watched this whole fire, it would look chaotic. But when you’re actually down in it, working it, it is like a symphony: Everybody knows where everybody else is going, everybody knows what the tactics are going to be, and it just flows. 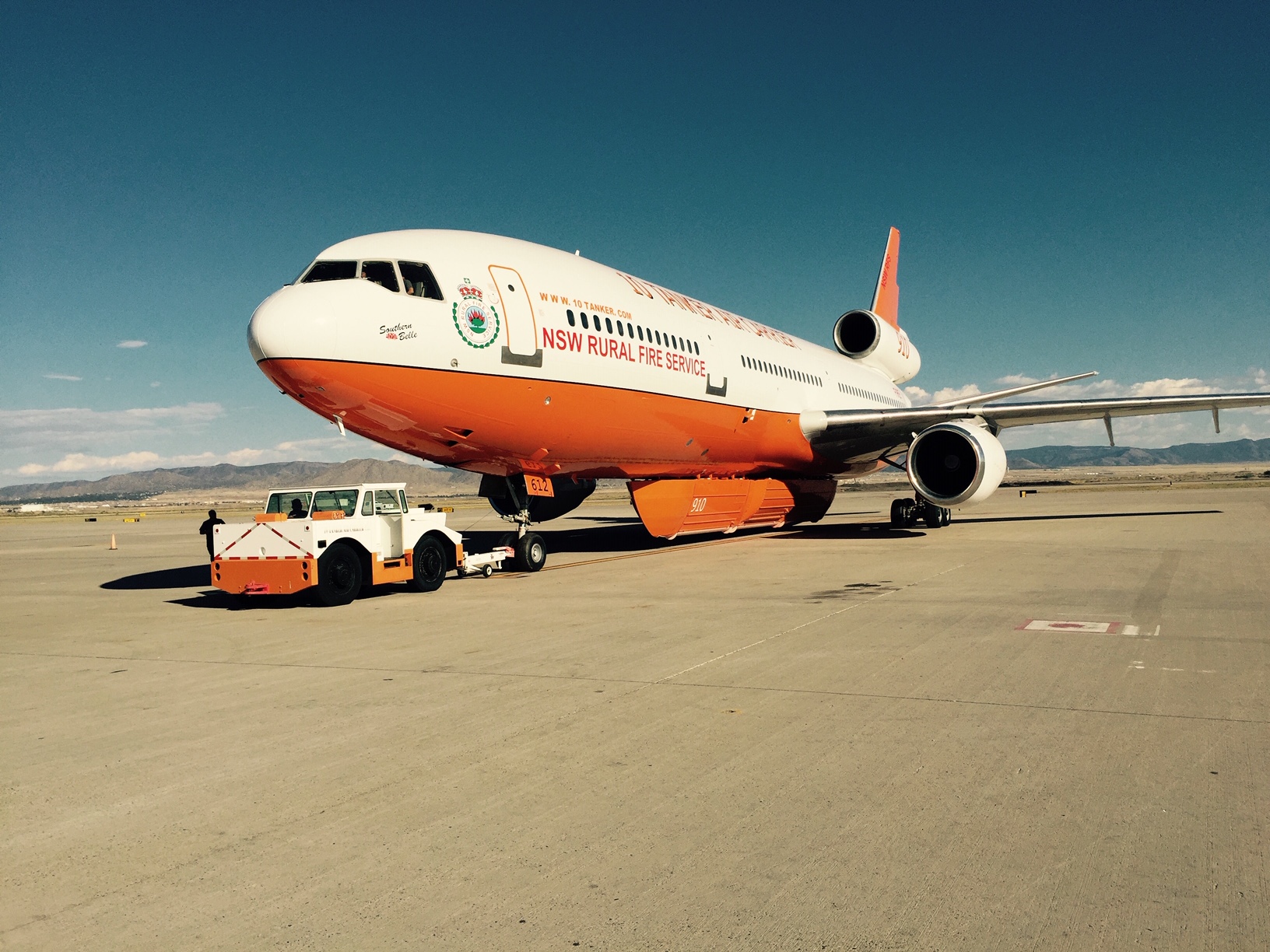 GER: What part does the lead plane play in this symphony?

HOPF: Once we agree [on a plan of attack], we get in close behind the lead airplane and follow him down on the descent. All of the lead airplanes have smoke generators on them. The smoke generator is used primarily to give us a starting point but the secondary effect of that is to look for wind drift. If he pops his smoke and the smoke is drifting left or right, we can then make a correction knowing where that retardant needs to land versus where it’s going to come out of the airplane.

GER: So you constantly have to monitor and adjust for weather conditions?

RICK HATTON, founder of 10 Tanker: Right. It’s very visual. Four eyeballs are outside the cockpit, and two, usually the flight engineer, are monitoring things inside in case there’s a warning light or something like that. That’s why we like the three-man crew.

GER: What’s it like to pilot a jet of that size, heavy with fire retardant, at a low altitude?

HOPF: Rick told me this 15 years ago: This airplane does not have any idea what is below it. It doesn’t know we’re in steep canyons. The terrain underneath us doesn’t matter. It’s just absolutely true. It flies just like it would be flying at 10,000 feet. It handles like a sports car and that gives us the ability to get into places that you would think a big, sluggish airliner wouldn’t be able to get into or out of. When we hire new pilots, I tell them, “When you sit in that seat, you have to forget how big this airplane is because it doesn’t handle like a big airplane.”

GER: Most people are probably unaware that jet-powered airliners are part of the arsenal used to fight forest fires. What is it about the DC-10 that makes it suitable for such rugged work?

HOPF: When the offer came to fly the DC-10, which I had been flying for about five years hauling passengers around the world, it felt like, “Yeah this is gonna work.” It’s just a fantastic platform and part of it is the power we have from the GE CF6-50 engines on this airplane. Power is nothing more than safety and in this job anything you can do to make it safer, that makes all the difference in the world. Even when we’re fully loaded this airplane is so maneuverable.

I will tell you, when I first was told that the company was going to put a tank on this airplane, I looked at it and thought, “Well, this might be a little bit big.” I know it wasn’t built and designed originally with any of this in mind, but the airplane just handles fantastic.

GER: When you’re flying so close to large forest fires, can you feel the heat?

HOPF: It’s a great question because if you see the videos you think, wow. But no, we never feel the heat. Retardant is primarily used just like the name says — to slow the fire down. It’s not a suppressant. All we’re doing is building a line out front of it. As the fire bumps into that line, it starts eating into that retardant, dropping the flame lengths down to where people can actually come in on the ground and start attacking that fire.

GER: How many missions are you flying in a day?

HOPF: I can’t give you a hard number. It changes every day. Yesterday we got in three and they were all late in the day. Visibility is usually the driving factor. The way the state of California is right now, the smoke layer is pretty thick in a lot of different areas. On any given day we could sit all day and not fly or we could do eight to 10 trips. We never know. The only thing that’s guaranteed when it comes to that kind of stuff is that there’s no guarantee. 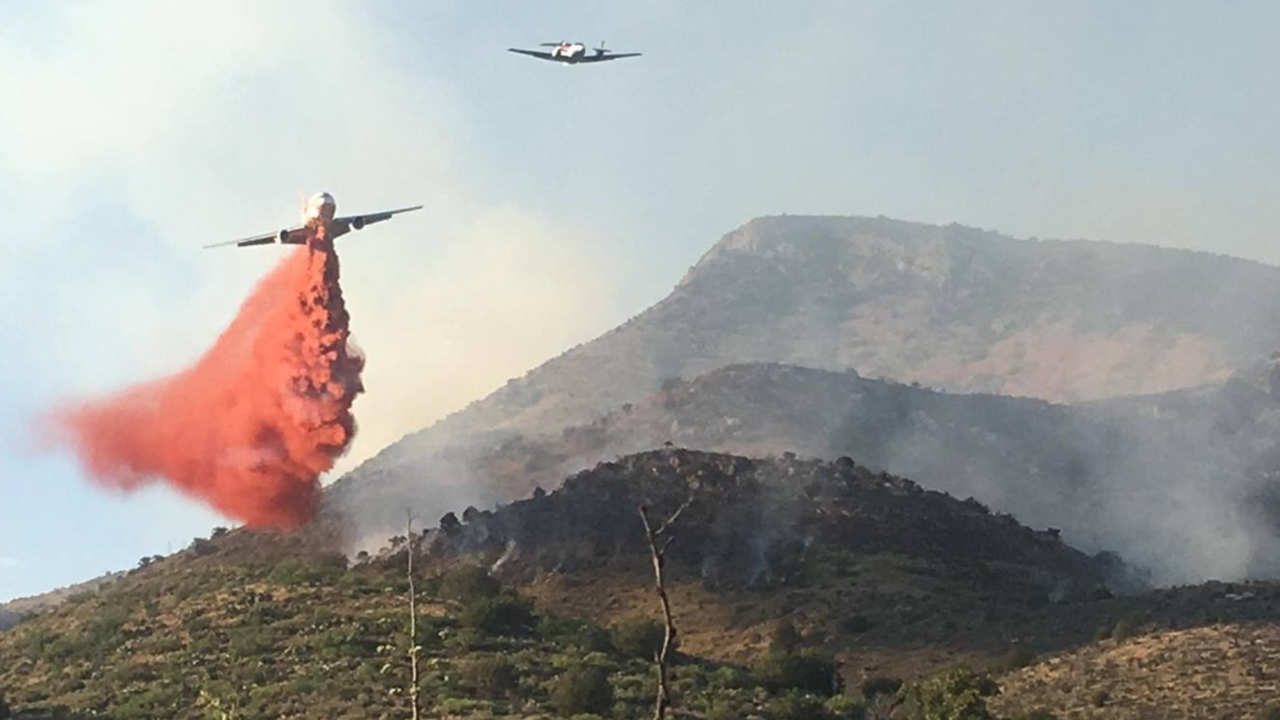 GER: How does this fire season compare to past years?

HOPF: Over the last 10 or 15 years, things are changing. We’re seeing some megafires — like what we’re seeing now. We’ve always had fires, they’ve always gotten big. This year seems to be one of the bigger years.

A lot of our drops are located in backyards. Where 20 or 30 years ago there weren’t homes, out in what used to be the middle of nowhere, now it’s got property that needs to be protected.

GER: You’ve been flying tankers for a long time. Has the job ever become a routine?

HOPF: Every time we go back to a fire — it doesn’t matter if it’s the same fire we’ve been working all day — it’s different. Nothing is the same. That fire has moved, the smoke has changed direction, the winds have changed, the run-in heading is different. I can’t let myself look at the fire and get emotionally involved. We do see structures going up in flames but you just can’t attach yourself to that. Stay within that profile, put it where it needs to go, and get out of the area as quickly as we came into it. Let the next person do their job and we’re heading back to get another load. I hate to say it but it’s our job, that’s what we do. You can’t let that get to you.