A Mask In 15 Minutes: How An Engineer’s 3D-Printed Design For COVID-19 Protection Went Viral

Mark Fuller didn’t set out to fight the pandemic. In mid-March, he went shopping to get a respirator mask to complete a woodworking project when he noticed that none of the stores near his Cincinnati home had any of the usual gear — gloves, goggles or masks. Then he went online and saw that the masks he usually buys for 50 cents were going for $30.

Fuller decided he could do better.

Fuller works in additive manufacturing — what most people call 3D printing — at GE Additive, where he helps to design parts for aircraft, rockets and even race cars that can be printed out of metal in one hair-thin layer at a time. It’s demanding work involving machines that use laser or electron beams to heat metal powder to 1,800 degrees Fahrenheit while adhering to strict engineering requirements.

At home, however, Fuller let his 3D-printing imagination run wild, printing out of low-cost plastic and posting original creations online for fellow tinkerers to comment on and riff off of. His first brush with home 3D-printing fame was a design for a fidget spinner — those handheld toys that in recent years divided humanity into yeas and nays — that the maker community downloaded of his design 2 million times.

This project was going to be anything but a toy. Fuller wanted to design a face mask that would be easy, low-cost and fast to make and flexible enough for anyone to use, regardless of the materials they had on hand. He surveyed the mask designs the 3D-printing community was churning out and noticed flaws: One popular 3D model took 10 hours to print, another couldn’t be printed successfully and a third that got a lot of attention required a scuba mask and specific HEPA filters.

Borrowing from his professional training, Fuller simplified. He took the physical outline of the face masks he saw others making online and stripped away everything else, leaving a thin ring of moldable plastic with small cleats for string or rubber bands to hold the frame to the wearer’s face, under which the wearer could fit any fabric that could act as a filter. Fuller was hoping for something that could be printed anywhere but also mass-produced by more conventional means.

“I designed it in a way that you can take the same core geometry and go and injection mold them or go and laser cut them,” says Fuller. “What machines are not being utilized for production today can be used to help save lives.”

Five days after his failed shopping trip, Fuller posted his prototype to a Facebook group focused on open-source medical equipment to fight COVID-19, quickly garnering hundreds of likes and comments suggesting improvements such as a thinner nose area and more flexible plastic. He worked the suggestions into a second design, printed some at home, and through the GE Additive COVID-19 Task Force, which Fuller is a part, began sending them to local hospitals. Then the design went global in a big way. 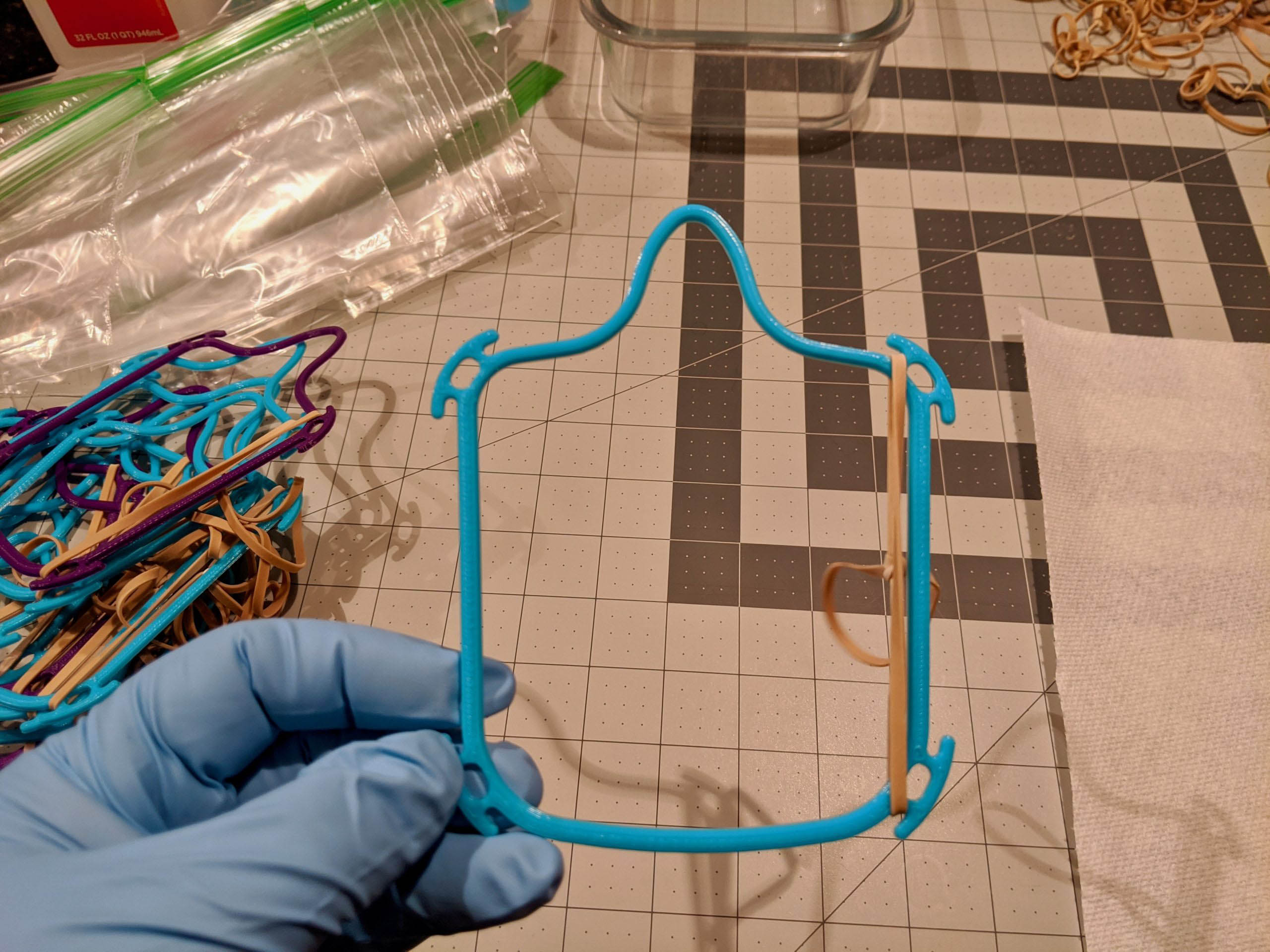 Top and above: Mark Fuller, who works in GE Additive, created a face mask design that takes about 15 minutes to print and costs, in Fuller’s estimate, about 9 cents worth of plastic. It also works with just about any filter materials on hand, from an air conditioner filter to a piece of terry cloth to a paper towel. GE offered the design to additive manufacturing leaders at the Navy’s Air Systems Command and found them enthusiastic.  Image credits: Mark Fuller.

One organization that was racing to find ways to produce more protective gear was the U.S. Navy. Keeping sailors healthy in the confined spaces of warships was proving a challenge and GE had been showing a 3D-printed face shield designed to work with a hard hat to the Navy officials. Now the Navy was telling GE it needed lots of masks and needed them immediately all over the world. The Centers for Disease Control and Prevention was recommending that Americans wear some sort of face cover but front-line health workers had rightfully become the priority for receiving surgical masks or N95 respirators. Fuller’s printable frame started to look more useful.

The design takes about 15 minutes to print and costs, in Fuller’s estimate, about 9 cents worth of plastic. It also works with just about any filter materials on hand, from an air conditioner filter to a piece of terry cloth to a paper towel. GE offered the design to additive manufacturing leaders at the Navy’s Air Systems Command and found them enthusiastic. The Navy has been quick to adopt additive manufacturing, printing out some aircraft parts like valves but also helmet modifications.

The National Institutes of Health, meanwhile, found the design to be suitable for community use against the coronavirus, which in turn gave the Navy a green light at a time of great uncertainty.

To be sure, the mask is not an N95 alternative and isn’t certified to be used as a medical device. But Navy additive manufacturing teams determined that the frame would work best when paired with four rubber bands to hold the mask in place and a small patch of cloth as a filter, packaged in a small plastic bag and produced in about 20 minutes. By April 7, sailors and Marines were printing GE’s mask by the tens of thousands.

“The GE face mask design gives us a way to immediately provide protective gear to our sailors and Marines anywhere there is 3D printer available — including aboard our ships and submarines, as well as with our expeditionary forces. It was fantastic to have a design that afforded us the opportunity to rapidly respond to this urgent fleet need,” says Liz McMichael, additive manufacturing integrated program team lead for the U.S. Navy.

At a Marine Corps air station on the Japanese island of Okinawa, two noncommissioned officers switched from printing aircraft maintenance parts to churning out 800 of Fuller’s masks each day, adding elastic bands and fabric filters. A naval base in Maryland used glue guns and air conditioner filters to adapt Fuller’s design. At a base in Panama City, Florida, personnel packaged Fuller’s frames with cotton fabric and a coffee filter.

“Throughout the COVID-19 crisis and our collaboration with the Food and Drug Administration, NIH and Veteran Affairs, our goal has been to help provide a centralized location for safe and effective 3D-printed PPE,” says John Wilczynski, executive director of America Makes. “This design was really a proof point of that approach. There was an immediate need, a capability, and an avenue for the resulting design to be reviewed for appropriate use and shared.” 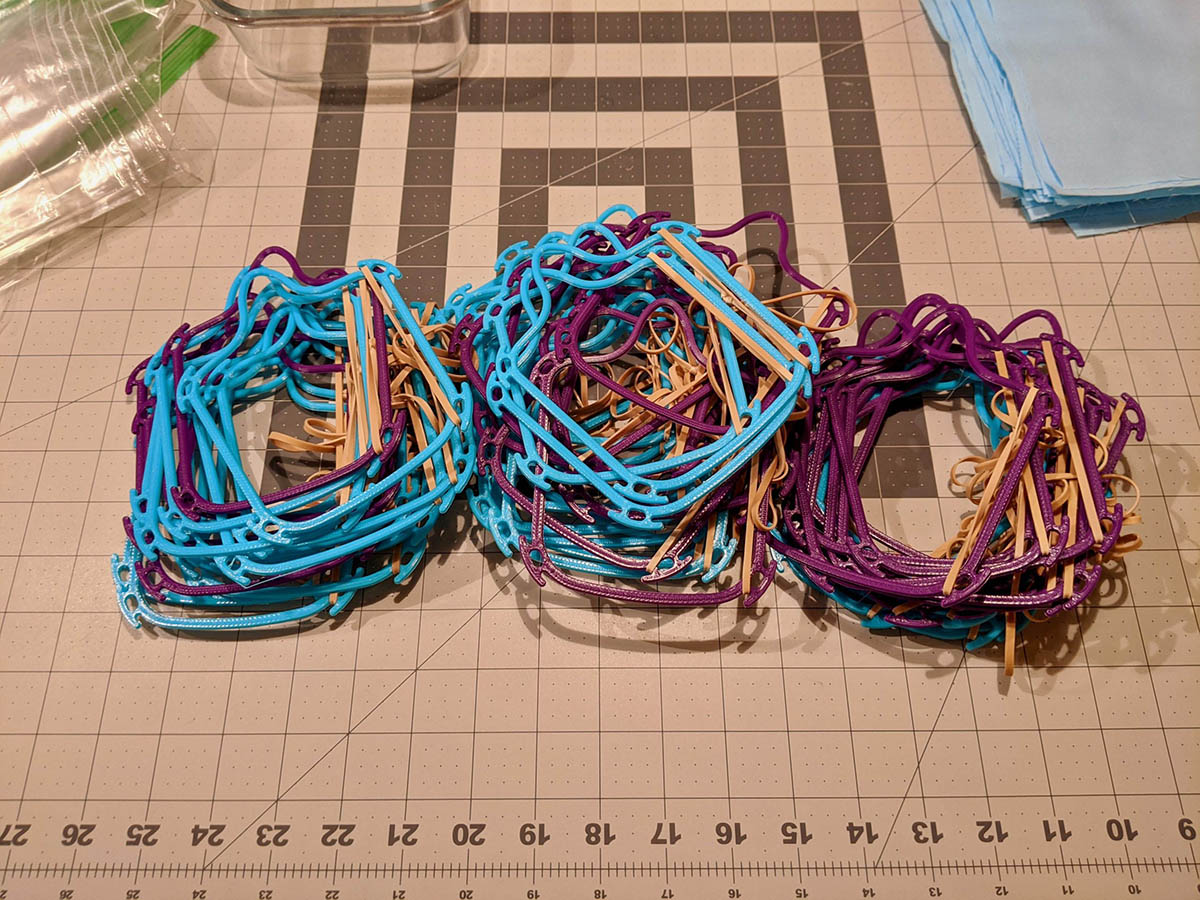 Fuller attributes the success of his design to the engineering methods he works with each day at GE. “I took the same principles we train with at GE Additive and applied it to the face mask,” he says. “A big part was the voice of the customer, the customer being everybody. Working with the GE Additive COVID-19 Task Force, I had the largest pool of customers available.”

Even as the U.S. military was ramping up production of the face mask, his design took on a life of its own within the maker community, showing how technologies like additive manufacturing allow for improvisation and innovation on a vast scale. After Fuller posted his first design on Facebook, he uploaded the 3D model files to sites popular with 3D-printing enthusiasts like GrabCAD and Thingiverse, where people began to test and improve on his work.

“The beauty of the maker community in times like these is that we’re all sharing our design ideas in open-source forums,” Whitney Sample, co-director of the University of Delaware Design Studio, says. A team of researchers and designers at this university modified Fuller’s design before releasing it back to the maker community for additional feedback.

Fuller enjoyed tracking the various mentions of his design as they popped up online but he found a special joy when his wife went into labor with their first child in early May. While he didn’t need protective gear to be admitted to the delivery room, he had a ready supply at hand.