A new device could bring DNA analysis to the bedside, 3D-printed tumors could help doctors attack cancer, and a know-it-all sensor that listens to electricity could spot a short in your home before you lose power. This week’s science news haul is pretty powerful.

I Spy, With My Little Sensor, Electrical Anomalies 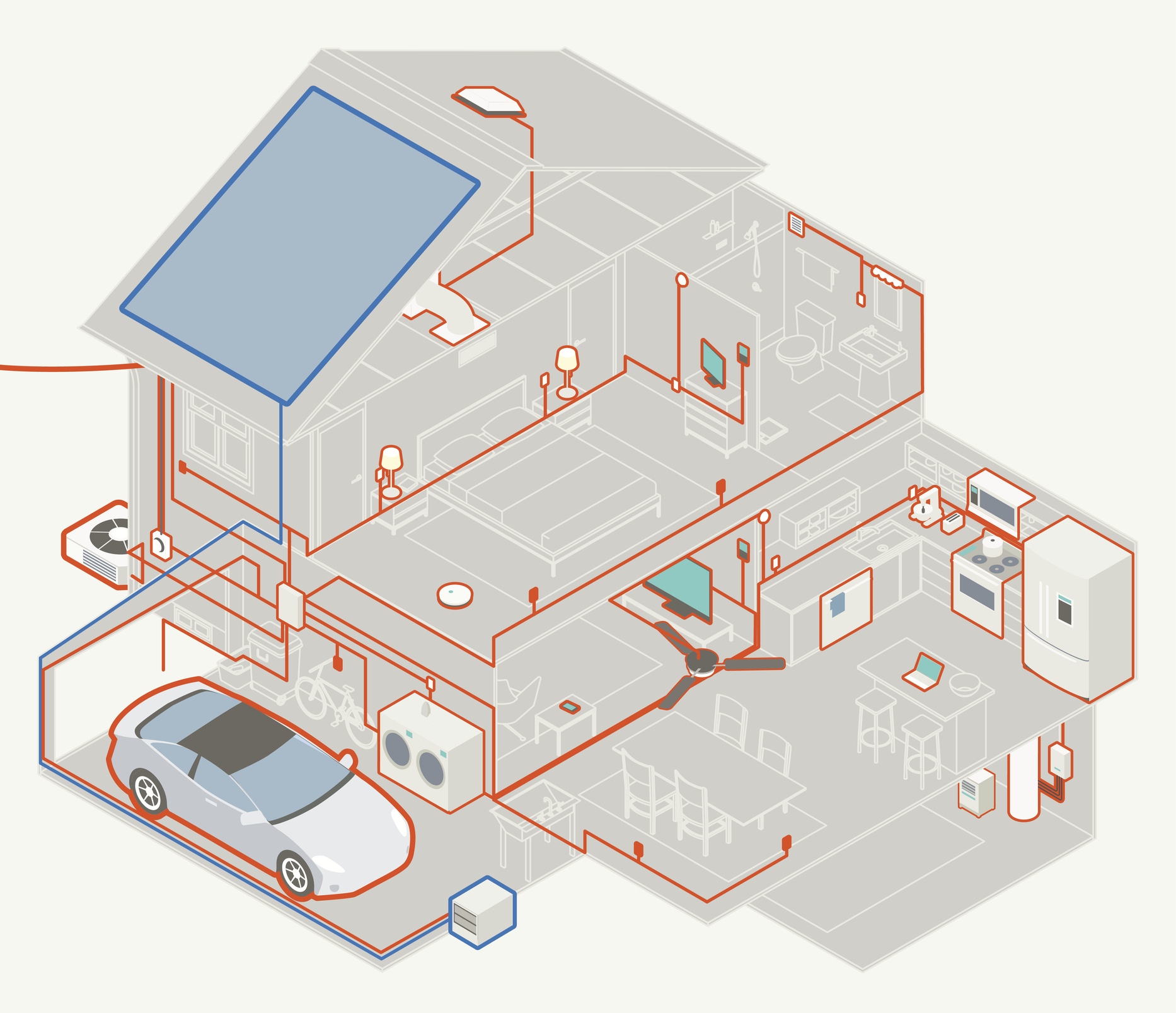 Top image: MIT tested the sensor on a U.S. Coast Guard cutter. The device can “sense the flow of current” in the wire, and spot “the distinctive ‘signatures’ of each motor, pump, or piece of equipment in the circuit by analyzing tiny, unique fluctuations in the voltage and current whenever a device switches on or off.” Photo credit: RICARDO ARDUENGO/AFP/Getty Images. Above: The sensor can also keep an eye on a house. Image credit: Getty Images.


What is it? A team of MIT engineers built a sensor that can spot “imminent” electrical failure inside a small structure by monitoring the behavior of all electric devices. MIT News reported that “when tested on a Coast Guard cutter, the system pinpointed a motor with burnt-out wiring that could have led to a serious onboard fire.” In 2018, two sensors aboard the cutter were able to monitor 20 different motors and other devices. “The ship is complicated,” said MIT professor of electrical engineering Steven Leeb. “It’s magnificently run and maintained, but nobody is going to be able to spot everything.”

Why does it matter? MIT reported that the sensor was “especially well-suited for relatively small, contained electrical systems such as those serving a small ship, building, or factory with a limited number of devices to monitor.” It can be also used to “monitor energy usage, to identify possible efficiency improvements and determine when and where devices are in use or sitting idle.”

How does it work? The sensor attaches to the outside of a wire and doesn’t require “any cutting or splicing,” according to MIT News. It can “sense the flow of current” in the wire, and spot “the distinctive ‘signatures’ of each motor, pump, or piece of equipment in the circuit by analyzing tiny, unique fluctuations in the voltage and current whenever a device switches on or off.” The sensor sends the information to a user-friendly dashboard where humans can see it and take action. The research was published in the March issue of IEEE Transactions on Industrial Informatics.

A Body Part Of Knowledge 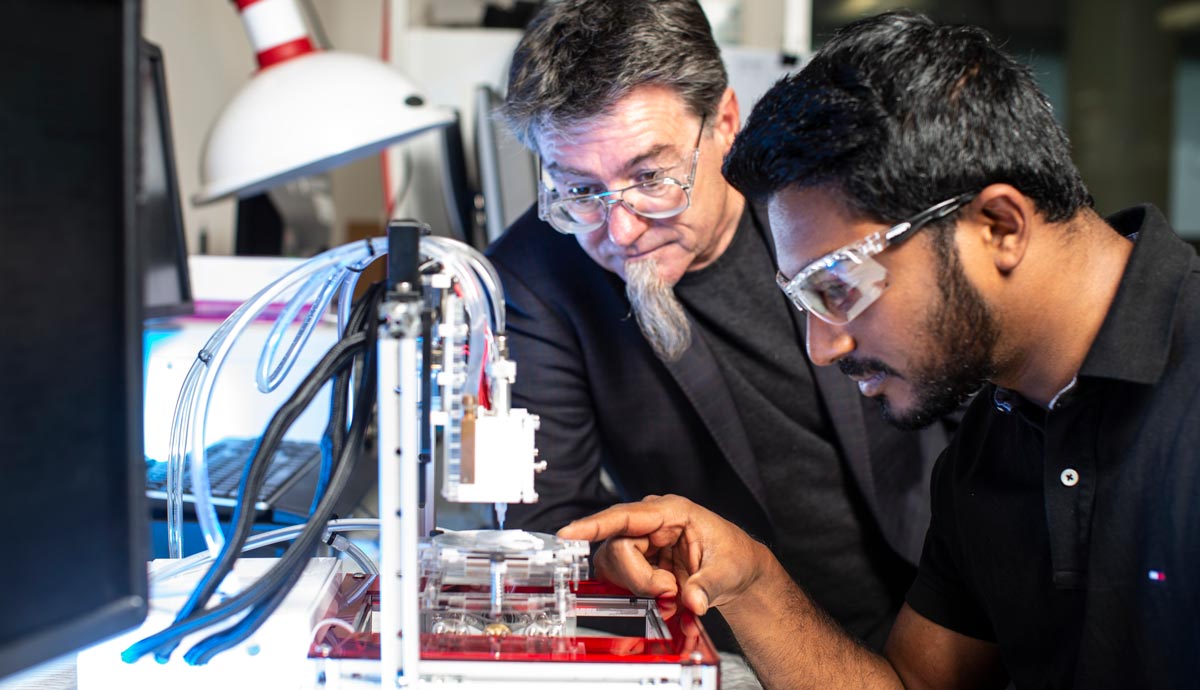 Surgeons at the Royal Prince Alfred Hospital in Sydney, which helped with the research, plan to use the printer to treat microtia, a congenital deformity of the outer ear. Image credit: University of Wollongong.


What is it? Researchers at Australia’s University of Wollongong have built the “world’s first customized 3D bioprinter” that can manufacture human ears. It’s called 3D Alek.

Why does it matter? Surgeons at the Royal Prince Alfred Hospital in Sydney, which helped with the research, plan to use the printer to treat microtia, a congenital deformity of the outer ear. “Treatment of this particular ear deformity is demanding because the outer ear is an extremely complex 3D shape, not only in length and breadth, but also in height and projection from the skull,” said Payal Mukherjee, a surgeon and associate professor at the hospital. “This is where bioprinting is an extremely exciting avenue, as it allows an ear graft to be designed and customized to the patient’s own face using the patient’s own natural tissue — resulting in reduced operating time and improved cosmetic outcome — and avoids the current complication of requiring a donor site for cartilage, usually from the patient’s rib cage.”

How does it work? 3D Alek uses a special bio-ink developed and manufactured by researchers at the Australian Research Council Centre of Excellence for Electromaterials Science, headquartered at Wollongong, and the Australian National Fabrication Facility. The university said the team will next focus on “accelerating the development of the specialized bio-ink by using stem cells from human tissue, with the hope of eventually being able to print a living ear using a patient’s own stem cells.” 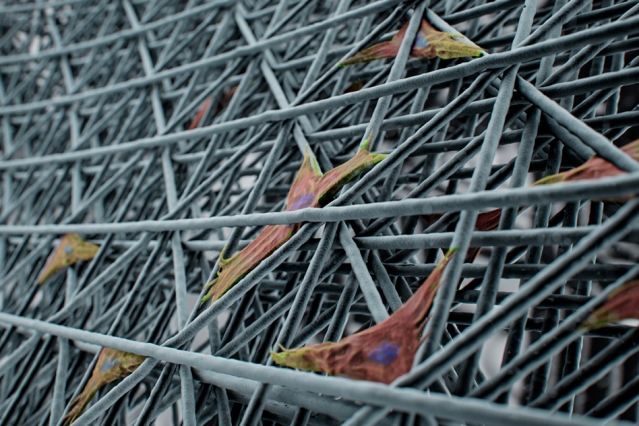 Microfilaments made using a new 3D printing method, shown in gray in this illustration, form a structure that cells, shown in color, can adhere to. The shapes formed by the filaments determine the very uniform shapes of cells. Caption credit: MIT News. Illustration credit: Eli Gershenfeld/MIT News.


What is it? Speaking of cells, scientists at MIT and the Stevens Institute of Technology in New Jersey found a way to 3D-print superfine lattices and meshes from fibers one-tenth the width of a human hair than can be used to grow a lot of highly uniform human cells and provide material for medical research and possibly even for building artificial organs.

Why does it matter? Filippos Tourlomousis, a postdoc at MIT’s Center for Bits and Atoms, said that printing at such small scale produces “a real 3D environment” for growing the cells. Besides artificial organs, the technique could also lead to new “‘metamaterials,” which MIT describes as “synthetic materials with layered or patterned structures that can produce exotic optical or electronic properties.”

How does it work? The team shrunk the printing process by “adding a strong electric field between the nozzle extruding the fiber and the stage on which the structure is being printed,” MIT News said. Ordinary 3D printing produces filaments as fine as 150 microns, MIT News said, but the team was able to achieve fiber widths of 10 microns. 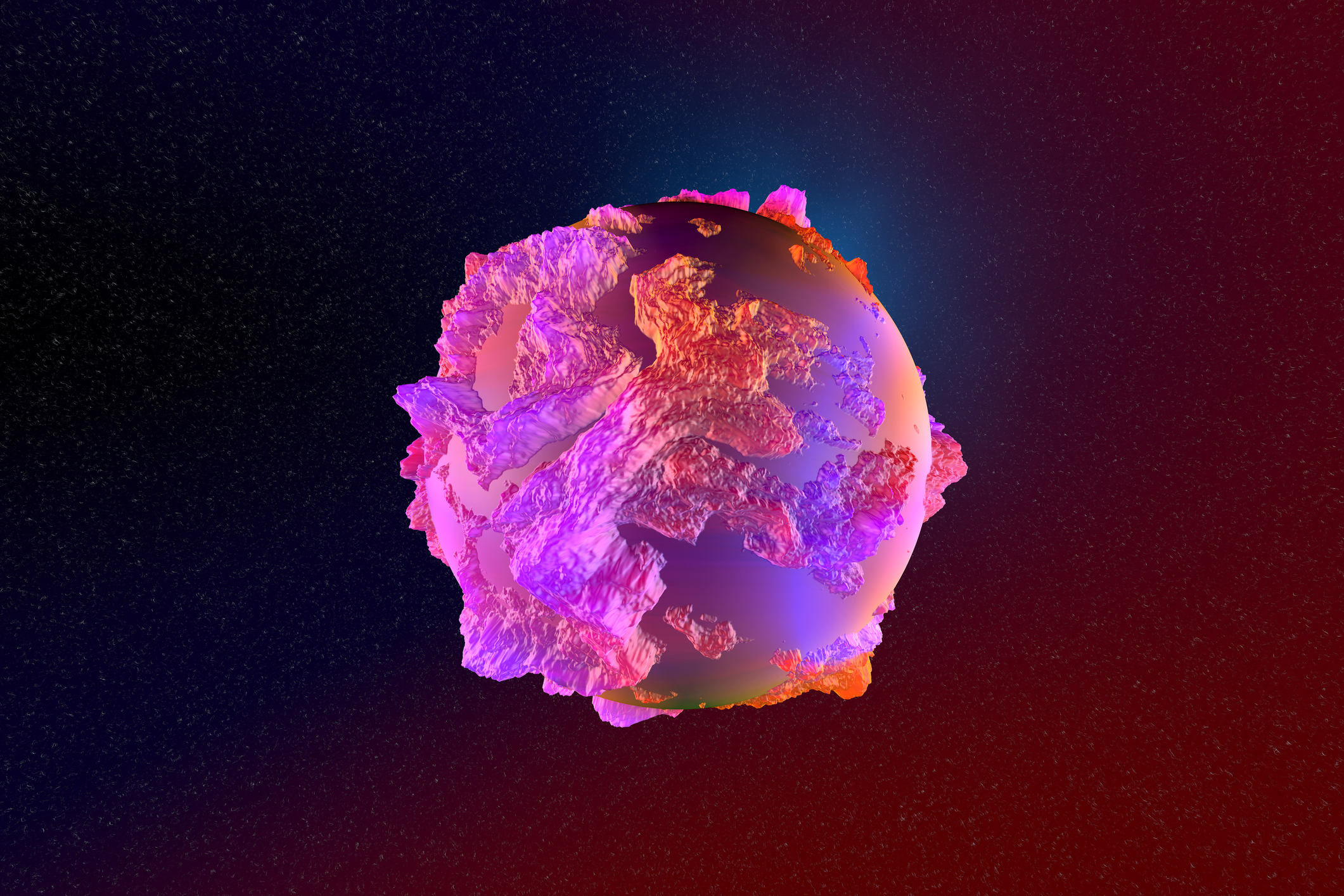 
What is it? This week, bioprinting scored a hat trick: While Australian scientists were building ears, and MIT researchers creating cellular lattice, a team of engineers at Canada’s McMaster University 3D-printed artificial tumors to serve as targets for cancer researchers testing new drugs and treatments.

Why does it matter? Testing cancer drugs is a time-consuming and expensive undertaking, typically involving animal models or a single layer of human or animal cells grown in a lab. In the future, the university said, “tumors containing cancer cells could be rapidly created through 3D printing, and responses of these artificial tumors to drugs rapidly tested, with scores of experiments being conducted simultaneously. Printing human-like cell clusters also offers a future pathway for the 3D printing of multiple tissues and organs.” The method could also reduce reliance on animal testing.

How does it work? The team’s specially formulated bio-inks contain human breast cancer cells suspended in a culture medium containing a magnetic salt hydrate. “When a magnetic field is applied, the salt hydrate moves towards the magnets, displacing the cells to a predetermined area of minimum magnetic field strength,” the university reported. “This seeds the formation of a 3D cell cluster” — in other words, an artificial tumor, which the team was able to print in less than six hours. 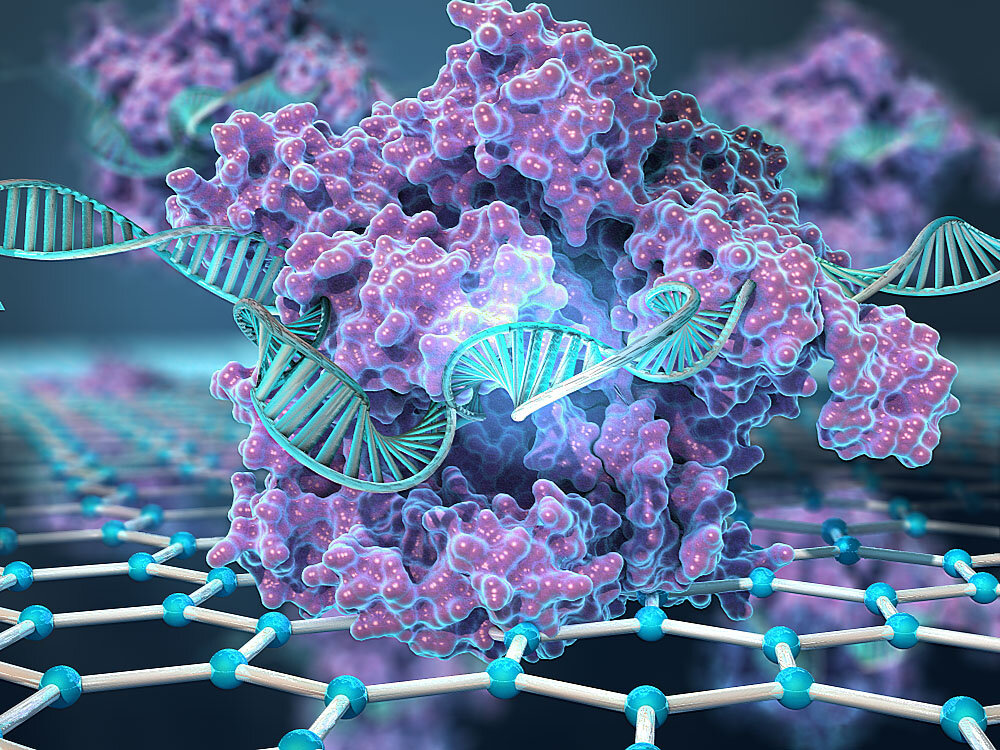 Kiana Aran's novel system immobilizes the CRISPR complexes on the surface of graphene-based transistors. These complexes search a genome to find their target sequence and, if the search is successful, bind to its DNA. This binding changes the conductivity of the graphene material in the transistor, which detects the change using a handheld reader. Caption and image credits: Keck Graduate Institute (KGI).


What is it? A team of engineers working at the University of California, Berkeley, and the Keck Graduate Institute of The Claremont Colleges built a handheld device that can quickly detect specific genetic mutations by combining the DNA-editing tool CRISPR with electronic transistors made from the wonder material graphene.

Why does it matter? CRISPR-Chip, as the device is called, “could be used to rapidly diagnose genetic diseases or to evaluate the accuracy of gene-editing techniques,” according to Berkeley. "We have developed the first transistor that uses CRISPR to search your genome for potential mutations," said Kiana Aran, an assistant professor at KGI who came up with the technology. "You just put your purified DNA sample on the chip, allow CRISPR to do the search and the graphene transistor reports the result of this search in minutes." The team reported that it already used the technology to find a pair of common mutations in blood samples from patients suffering from Duchenne muscular dystrophy.

How does it work? The device uses “nanoelectronics” to detect genetic mutations in DNA. “When the CRISPR complex finds the spot on the DNA that it is targeting, it binds to it and triggers a change in the electrical conductance of the graphene,” according to Berkeley. Graphene “is so electrically sensitive that it can detect a DNA sequence ‘hit’ in a full-genome sample” without laboriously replicating it through a process called polymerase chain reaction. “This means it could be used to perform genetic testing in a doctor's office or field work setting without having to send a sample off to a lab.” The research was reported in the journal Nature Biomedical Engineering.