An 88-milligram methanol-powered “beetle” points the way forward in the field of microrobotics, miniature lab-grown organs will help researchers better understand congenital heart defects, and tiny microdevices herald a revolution in the field of optics. In this batch of cool scientific achievements, small stuff is making big waves. 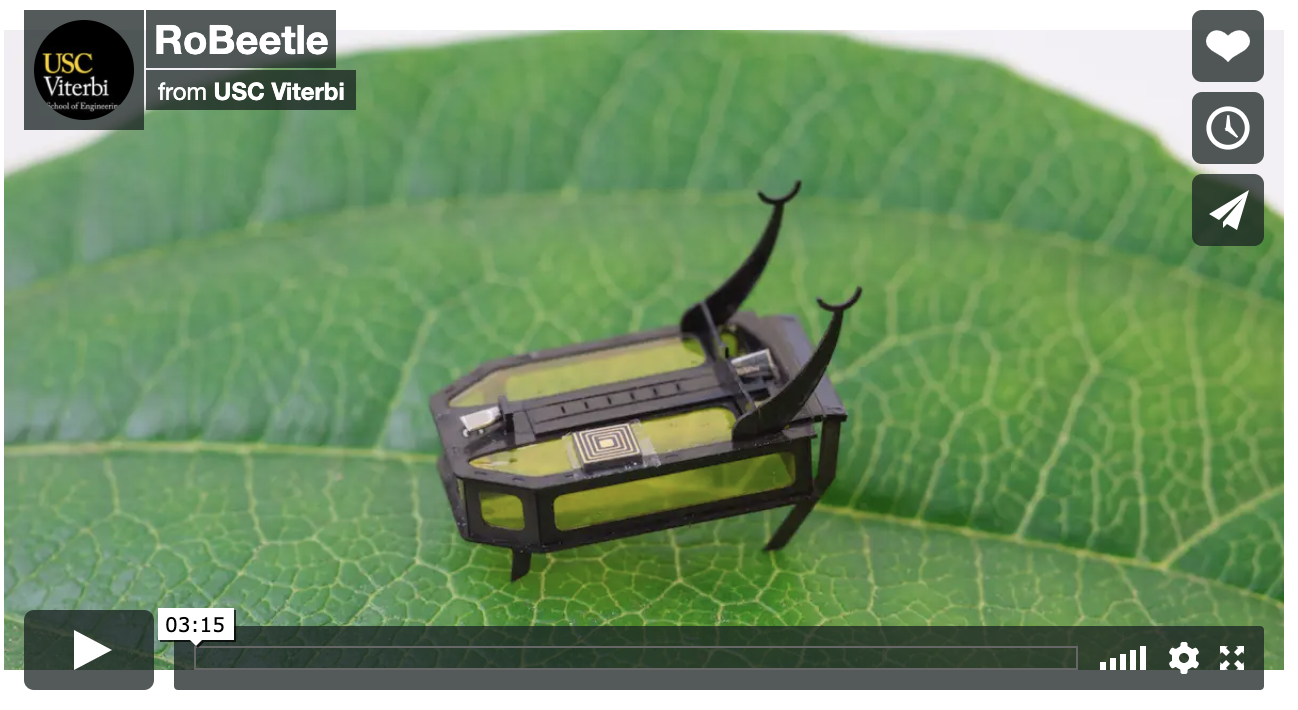 What is it? Researchers at the University of Southern California’s Autonomous Microrobotic Systems Laboratory created “the lightest and smallest, fully autonomous crawling microrobot reported to date.” It’s the RoBeetle!

Why does it matter? According to a USC news release, the RoBeetle’s design may “serve as a paradigm for the creation of a new, diverse generation of autonomous microrobots capable of locomotion on land and in air and water.” The research was funded in part by the Defense Advanced Research Projects Agency.

How does it work? Weighing in at only 88 milligrams — about the same mass of three grains of rice, and similar to the weight and size of some actual beetles — the methanol-fueled RoBeetle relies on an “artificial muscle” powered by controlled catalytic combustion. Its creators see it as validation of the idea that fuels such as methanol and butane can produce more bang for the energy buck in subgram microrobots than batteries typically provide. The tiny device is described further in Science Robotics.

What is it? As noted above, the RoBeetle’s creators were motivated by the idea that the glucose and animal fats that power insects are more energy-dense than typical batteries. Seeking an insect-inspired microrobot that wouldn’t be weighed down by its battery or have to be plugged into an external power source, they turned to a high-energy fuel like methanol. From the University of Michigan, though, came another solution: Researchers there created a rechargeable zinc battery that provides robots and microrobots with a lot of energy by integrating into their structures similar to how “biological fat reserves store energy in animals.”

Why does it matter? As engineering professor Nicholas Kotov explained, “Robot designs are restricted by the need for batteries that often occupy 20% or more of the available space inside a robot, or account for a similar proportion of the robot’s weight.” The goal is lighter, more efficient robots that don’t need to be tethered to a power source, aren’t weighed down inordinately by their batteries, and can perform deliveries, help provide healthcare or work in warehouses.

How does it work? According to a release from Michigan News, “the new battery works by passing hydroxide ions between a zinc electrode and the air side through an electrolyte membrane.” The membrane consists partly of the kind of carbon-based nanofibers found in Kevlar vests, as well as a water-based polymer gel that “helps shuttle the hydroxide ions between the electrodes.” Ahmet Emre, a doctoral student and a co-author of a paper on the battery in Science Robotics, said, “Batteries that can do double duty — to store charge and protect the robot’s ‘organs’ — replicate the multifunctionality of fat tissues serving to store energy in living creatures.”

Have A Mini Heart

What is it? At Michigan State University, researchers created the first “miniature human heart model” in the lab; the small organoid contains “all primary heart cell types and a functioning structure of chambers and vascular tissue.”

Why does it matter? The lab-grown organs — called human heart organoids, or HHOs — could offer researchers new insights into the genesis of disorders that develop in fetal hearts. (Roughly 1% of all live births involve congenital heart defects, the most common birth defect in humans.) Previously, they’ve been limited to animal models, donated fetal remains and in vitro cell research. “Now we can have the best of both worlds, a precise human model to study these diseases — a tiny human heart — without using fetal material or violating ethical principles,” said biomedical engineering professor Aitor Aguirre, the senior author of a paper on the organoids published on the preprint server bioRxiv. “This constitutes a great step forward.”

How does it work? The creation of HHOs relies on induced pluripotent stem cells, a kind of undifferentiated cell that can be directed to grow into any kind of cell in the body. Aguirre explained, “This process allows the stem cells to develop, basically as they would in an embryo, into the various cell types and structures present in the heart. We give the cells the instructions and they know what they have to do when all the appropriate conditions are met.” 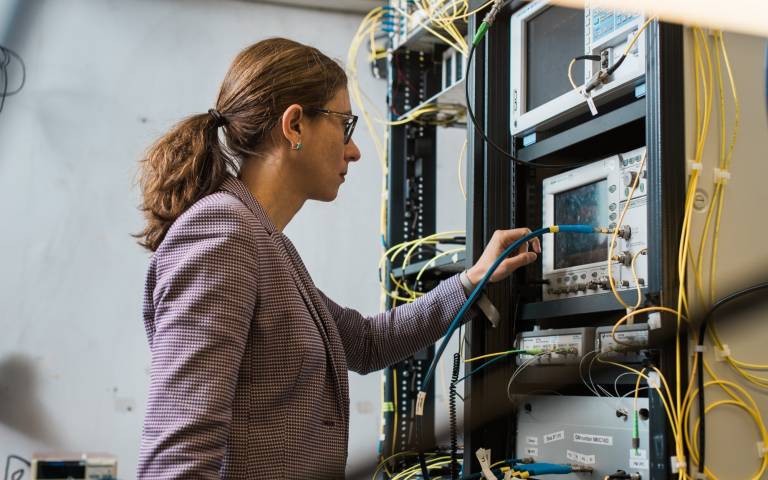 What is it? Researchers at University College London, working with two companies, set a world record for internet speed, achieving a data transmission rate of 178 terabits per second. At speeds like that, you could download everything on Netflix in less than a second. (You’d just want to set aside several years, plus bathroom breaks, to watch it all.)

Why does it matter? Who doesn’t want faster internet? Plus, demand on current broadband communications systems has been soaring, particularly since the onset of the COVID-19 pandemic, testing the reliability and resilience of existing networks. Research leader Lidia Galdino said, “Internet traffic has increased exponentially over the last 10 years and this whole growth in data demand is related to the cost per bit going down. The development of new technologies is crucial to maintaining this trend towards lower costs while meeting future data rate demands that will continue to increase, with as yet unthought-of applications that will transform people’s lives.”

How does it work? Described by Galdino and colleagues in IEEE Photonics Technology Letters, the system transmits data through a wider range of wavelengths than is typically involved in optical fiber, using different amplifier technologies to boost the signal. The technique, which leads to transmission rates that approach the theoretical limit, could be deployed on already existing infrastructure by upgrading the amplifiers used along optical fiber routes. 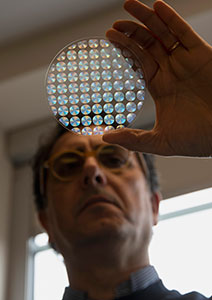 What is it? The field of optics is undergoing a massive change: Where for centuries humans have shaped glass into lenses that refract light to sharpen or amplify images, the past decade has seen the emergence of so-called metalenses — flat surfaces with microscopic pillars that mold and diffract the movement of light similar to a traditional glass lens, but with increased promise for applications such as mobile phones, computers, medical imaging and optical fiber lines. Now researchers have taken the technology a step further by using liquid crystals to make the lenses reconfigurable.

Why does it matter? In 2019, the World Economic Forum hailed metalenses as one of the year’s top emerging technologies, and the MIT Technology Review said they had the potential to “revolutionize chip-making” by providing “the ability to focus light into a pattern rather than a point.”

How does it work? According to a release from Case Western Reserve University — whose physics professor Giuseppe Strangi worked with colleagues at Harvard on the technology, described in PNAS — the reconfigurable metalenses work by “harnessing nanoscale forces to infiltrate liquid crystals between those microscopic pillars, allowing them to shape and diffract the light in completely new ways,” essentially “tuning” the focusing power. “We believe that this holds the promise to revolutionize optics as we know it since the 16th century,” Strangi said.