The 3D-Printed Age: Why This Futuristic Ohio Factory Is Proving Mark Twain Wrong

Mark Twain allegedly claimed that when the end of the world came, he wanted to be in Cincinnati “because it’s always 20 years behind the times.” The quip is funny, but his strategy to ride out Armageddon in the Queen City would backfire today. A case in point is GE’s Additive Technology Center located along Interstate 75 as it bisects the northern suburb of West Chester Township. From the outside, the building looks like many of the low, gray boxes in this industrial area. But step inside through large glass doors and you’ll enter what might easily be the world’s largest and most advanced 3D-printing facility and development center. “It’s not hard to walk into this building every morning and go to work,” says Eric Gatlin, a general manager for GE Aviation focusing on additive manufacturing. “A lot of the things we do here, we are doing for the very first time. I think that breeds a certain amount of excitement, a certain amount of energy, and requires a certain culture.”

Additive manufacturing, also known as 3D printing, allows engineers and designers to print complex metal parts directly from a computer file. The printers here produce intricate fuel nozzles for the GE9X, the world’s largest jet engine; ribbed gearbox covers for the GE Catalyst, the company’s new turboprop engine; alien-looking fuel heaters honeycombed with vessel-like channels; and many other items. The parts are built, step by tiny step, by fusing together super-thin layers of fine metal powder with lasers or electron beams. With the GE Catalyst, the technology allowed the company to combine 855 parts into just 12, reduce weight, simplify the supply chain and maintenance, and improve the engine’s performance.

As recently as 2015, the ATC, as GE calls it, was an empty shell that once held a Dell Computers distribution center. At that time, GE had already acquired Morris Technologies, an American additive manufacturing pioneer based in Cincinnati, and used 3D printing to develop an intricate tip for a fuel nozzle in a new jet engine called the LEAP. In 2016, the company followed that acquisition by taking majority stakes in Concept Laser, a German maker of 3D printers, and Arcam AB, which makes printers as well as the special metal powders used for printing. These companies now form the core of GE Additive.

Today, the ATC holds close to 90 3D printers, including six of the largest metal printers in the world, and employs 300 designers, machinists and engineers. The site belongs to GE Aviation, but about half of the employees come from GE Additive, a new GE business unit that makes 3D printers and the materials used for printing. 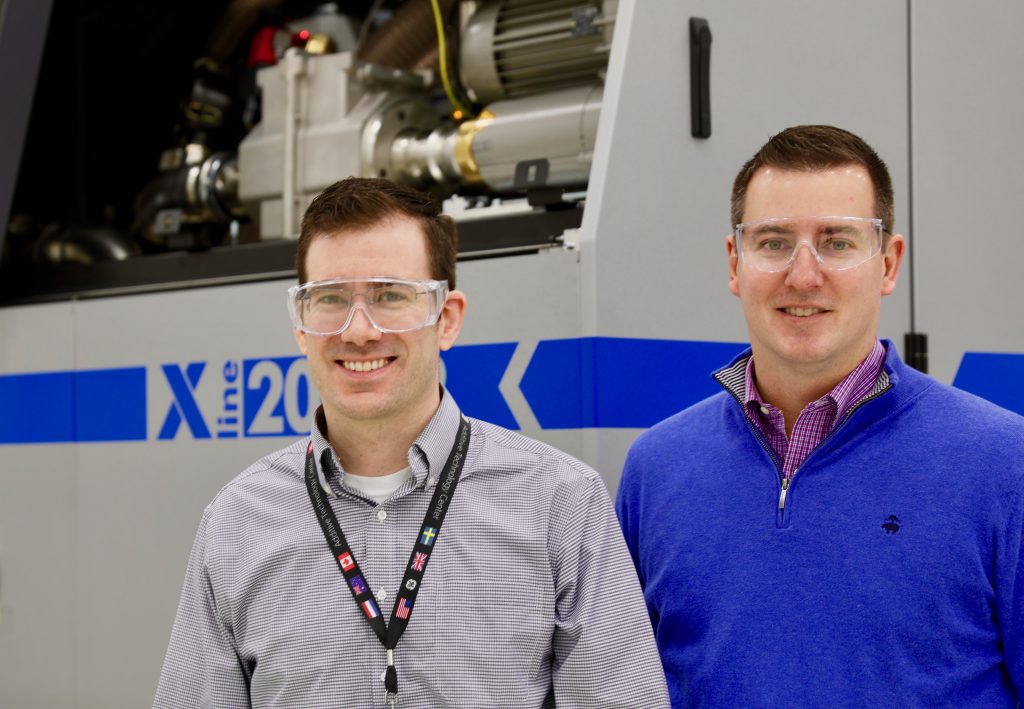 Top image: The ATC holds close to 90 3D printers, including six of the largest metal printers in the world called X Line 2000R. Above: “It's not magic," Steve Grimm (left), senior plant manager and staff manager at the ATC, says about 3D printing. "It enables you to do more complex things, but there is a lot of work that goes behind the scenes. That is what the team here is doing every day.” GE's Eric Gatlin says that "it’s not hard to walk into this building every morning and go to work. A lot of the things we do here, we are doing for the very first time.” Images credit: Tomas Kellner for GE Reports.

From the start, GE aimed to use the space as a melting pot the size of three football fields where manufacturing and supply chain engineers could easily talk to the technicians printing their designs as well as the people responsible for building the printers themselves and those developing the printing powder. “When you bring material science to the machine science and the product knowledge, you’ve got something that nobody else in the industry has,” Gatlin says.

Like a skilled matchmaker, GE laid out the ATC in a way that would make these interactions as natural and easy as possible. For example, the facility’s center is a large octagonal office area for workers, who zip in and out to the machines and workstations surrounding it like bees in a beehive. “This is a new industry,” Gatlin says. “You don't have tenured engineers with 20 years of experience in additive manufacturing. You've got people who have come from a variety of backgrounds and have had to re-sculpt their thinking and learn new engineering practices. We wanted to create a learning environment because there’s no playbook for this.”

Steve Grimm, who serves as senior plant manager and staff manager at the ATC, says he wanted the engineers to sit smack dab in the middle of the shop to maximize interaction and cross-pollination of ideas. “They need to be working together along the way because you are not just making a part, you are creating a process,” he says. “You're defining how you are going to make that part repeatedly.”

Grimm says that the finished production process is easily transferable to 3D-printing factories GE Aviation operates in Cameri, Italy, and Auburn, Alabama. “Our intent is hand over a 90 percent completed project for the plant to pick up and run with,” he says. 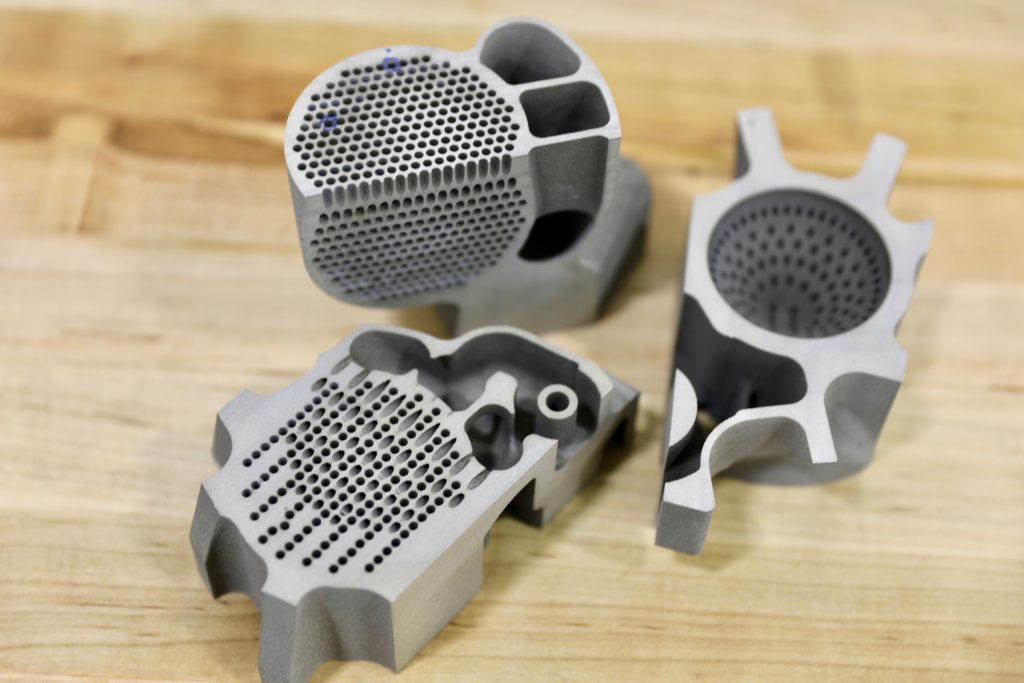 3D printing allows engineers to make parts that would be difficult or impossible to manufacture any other way. This example shows a 3D-printed heat exchanger. Image credit: Tomas Kellner for GE Reports.

One recent example is a 3D-printed bracket for the GEnx jet engine, which powers many Boeing 787 Dreamliner aircraft. Grimm and Gatlin are particularly proud of this project because it involved using additive manufacturing to redesign an existing part, rather than developing a new component from scratch. “It really represents the power of additive,” Gatlin says. “People sometimes think that 3D printing doesn’t make sense unless you can combine parts into a system. In many cases, that is absolutely where you get the maximum benefit, but there are also instances where simplicity rules. This is one of those cases.”

Each GEnx engine has two of these brackets, which hold the engine covers open during maintenance. The traditional method of making them requires suppliers to mill away material from a solid block of aluminum. It works, but it also results in a lot of waste. “We were being charged a significant amount for these parts,” Gatlin says.

That’s why last October he and Grimm asked the team at ATC to explore whether they could redesign it, print it on a Concept Laser machine and take it to production in less than a year. “We actually rejected it at first because it seemed too simple,” Gatlin says. “But the more we looked at it, the more we realized the value it represents.”

Ten months later, they handed off the production process to the Auburn 3D printing plant. Grimm says they make the bracket on a printer for less than the original price and can now apply that savings to the 2,200 GEnx engines on order. The process, which allowed them to radically reduce waste, also led to a lighter bracket, an important factor for the aviation industry. “The team has been able to find places where they could take material off areas you couldn’t reach with traditional subtractive manufacturing,” Grimm says, adding that a lighter bracket will also lead to fuel savings for airlines.

In addition to troubleshooting the production process for existing parts, workers at the ATC are also helping designers develop new parts, vet new machines and test new powders used for printing. “We are making lots of prototypes the designers can test on a test stand and iterate on the design,” Grimm says. “3D printing allows them to move very fast.”

The ATC also holds a research and development space where engineers test new features and applications for Concept Laser and Arcam printers. For example, the ATC houses the largest cluster of Concept Laser’s X-Line units anywhere in the world. These machines are the world’s largest industrial printers for metals, but GE Additive is already working to surpass them with Project A.T.L.A.S., a printer that will be able to make part as large as 1 meter in all three axes.

Gatlin, who joined GE from the automotive industry, says that the evolution of 3D printers reminds him of Moore’s Law. “They are evolving quite rapidly,” he says. “I think the engineers at the ATC were pushing the machine envelope to the point where we felt we were exceeding what the machine builders were willing to do themselves, which, I believe, was the purpose for the acquisitions.”

The collaboration with Concept Laser to improve machines is a two-way street. “In the past, we found ourselves constantly reaching upstream to the machine vendors and partnering with them to make their machines better,” Grimm says. “Today at the ATC, we are making the machines more valuable so that we can make more valuable products in return.”

This same logic applies to the powders the ATC team uses for printing. Engineers here are helping AP&C, an Arcam subsidiary and one of the world’s largest suppliers of powder for metal printers, develop new materials. “It offers us just great flexibility into the future as we’re looking at their next generation of machines,” Gatlin says. “On the materials side, it's the same thing.”

The future looks busy for Gatlin and Grimm. They say the ATC team has already identified more than 100 components that could be printed; one third are new products, but the rest involve redesigning existing parts like the bracket. “In some ways, additive is just like any other manufacturing technology,” Grimm says. “It's not magic. It enables you to do more complex things, but there is a lot of work that goes on behind the scenes. That is what the team here is doing every day.”