GE & EDF unveil a game-changer at Bouchain: a 62.22% efficiency rating for a combined-cycle power plant has never been achieved before… until now.

GE, with the partnership of EDF, just made history and set a Guinness World Records™ title for powering the world’s most efficient combined-cycle power plant (achieved 28 April 2016) in Bouchain, France. The Bouchain plant—which officially began operation on June 17—is also the world’s first combined-cycle plant equipped with GE’s HA turbine.

This latest achievement caps off a 45-year partnership between GE and EDF. Since the 1970s, GE has supplied EDF with close to 120 combustion turbines for its global network of thermal power plants. “By commissioning this new generation thermal plant, EDF demonstrates its intent to apply the best available technologies on the market to make its French thermal power plants more energy efficient while supporting the energy transition.” said Jean-Bernard Lévy, CEO of EDF.

It normally takes 10 years of development to raise power plant efficiency levels by 1%.

In addition powering Bouchain at record-setting efficiency levels, the HA gas turbine delivers enhanced flexibility, and is capable of reaching full power in less than 30 minutes. This allows partners to respond quickly to grid demand fluctuations, integrating renewables as necessary—supporting the COP21 agreement and its goal to reduce greenhouse gas emissions. In fact, Bouchain’s CO2 emissions are approximately 55% less than a standard thermal power plant.

Breaking ground: Ushering in a new era of power generation

GE and EDF officially began operation of the first ever combined-cycle power plant equipped with GE's HA gas turbine in Bouchain, France, launching a new era of power generation technology and digital integration. This plant also represents the most efficient gas power plant in the world at 62.22%!

But how does a record-setting power plant efficiency percentage happen? With the help of GE’s Digital Power Plant capabilities, which helped to unlock power at Bouchain that had previously been inaccessible. Capabilities, including the digital control system, use real-time data to deliver better plant outcomes with stable and efficient operations, while providing valuable predictive insights for higher reliability and optimization.

And the numbers speak for themselves. With the capacity to generate over 605 MW, the Bouchain plant will generate the equivalent power needed to supply 680,000 homes.  Additionally, the HA compressor boasts an airflow that could inflate the Goodyear blimp in 10 seconds, and the tip of the 9HA.01’s last blade clocks a speed of 1200 mph/1931 kph –1.5 times the speed of sound.

Want to learn even more about Bouchain? Check out GE Reports and get a deeper dive into the science and strategy behind this new world record. 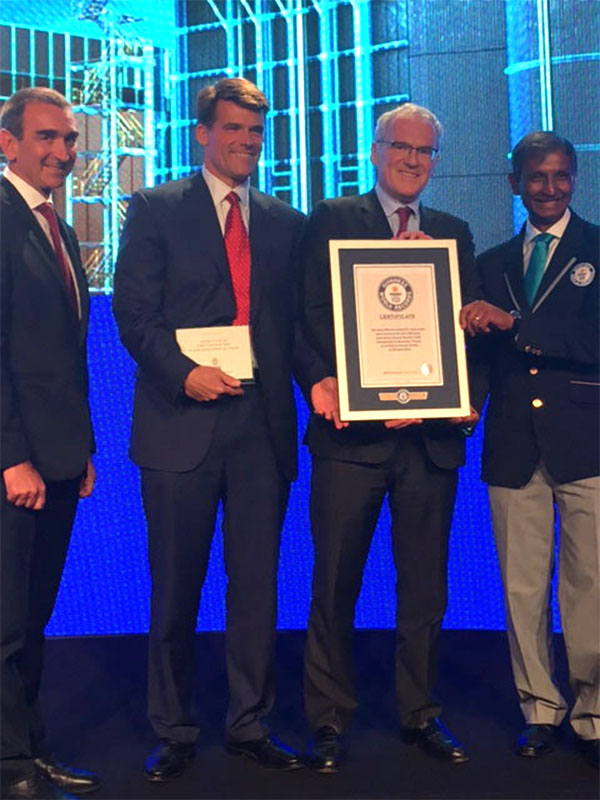 “This first HA turbine in Bouchain is a beacon for what is to come – better power, enhanced with the best digital industrial capabilities that will ultimately find its way across borders, deserts and oceans to nations across the globe.”

Learn More About The 9HA

Want to learn more about gas power plants and other energy solutions?