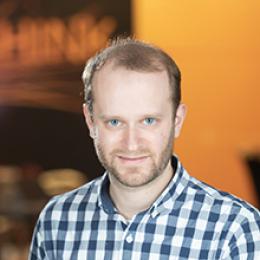 Dr. Barton is a Lead Control Systems Engineer at GE Research. He is currently working on the design, testing, and implementation in industrial control platforms of advanced estimation and multivariable control algorithms for on-shore wind turbines.

In addition, he has contributed to the development of LiDAR based estimation of the wind field for use in feedforward control algorithms for on-shore wind turbines. He has also designed model based control algorithms for equipment protection and load management of rod pumping oil and gas systems. These algorithms were subsequently implemented in an industrial control platform and field tested in collaboration with a GE business unit in preparation for commercialization.

During his graduate work, he developed physics-based models of the nonlinear, multivariable, distributed parameter dynamics of the magnetic and thermal state of the plasma in nuclear fusion tokamak devices. He subsequently used these models to design feedforward + feedback algorithms to control the plasma state evolution by employing advanced model based control design and optimization techniques. These algorithms were implemented and successfully experimentally tested on the DIII-D tokamak at General Atomics.