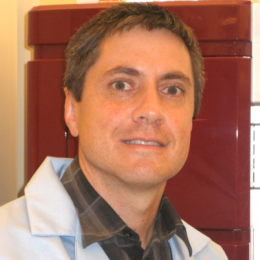 Dan Meyer, Ph.D. is a Principal Scientist and project leader working on contrast agent and tissue characterization technologies.  For the former, Dan works primarily on novel, chelate-based and nanoparticle agents for MR and CT imaging, and has expertise in research-stage imaging and safety studies. For the latter, he works with a multidisciplinary team of scientists and engineers in developing techniques for high-content, molecular characterization of neurological tissue, and in applying these techniques to the study of the basic mechanisms associated with initiation and progression of neurodegenerative diseases.  Through a portfolio of collaborative studies with academic and clinical research institutions,  Dan’s research seeks to help better understand and catalog the molecular profiles of neurons and glial cells in health and disease, and to identify common, underlying molecular mechanisms that span diseases and conditions such as Alzeheimer’s disease, frontotemporal dementia, and other neurodegenerative diseases.

Dan earned a B.S.E. in Bioengineering from Arizona State University in 1996, and subsequently graduated from Duke University with a Ph.D. in Biomedical Engineering in 2002.  His graduate research developed new methods for the genetically directed synthesis of protein-based polymers, and established new applications of these polymers in drug delivery and biotechnology.  This work resulted in the creation of a company that currently has ELP-drug constructs in clinical trials, and more generally sparked a growing body-of-work by various research groups exploiting environmentally responsive elastin-like polypeptides (ELPs) for a variety of applications in biotechnology and medicine.