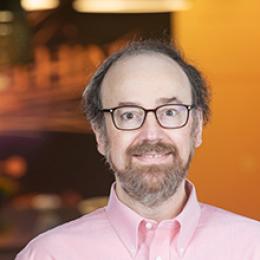 Inventing new cognitive architectures and modeling usage of memory, attention, and problem solving in embodied systems to better understand human capabilities and flaws toward more capable and fully autonomous systems that will be independent of human supervision in situations unanticipated by their designers.

Past work has included being the GE delegate to the Industrial Internet Consortium and co-chair of the Technology Working Group (2014-2016) winning their inaugural Innovation Award in 2016 for individual contributions; work on multiple DARPA sponsored programs including ACIP (Architectures for Cognitive Information Processing) where as part of the Raytheon-led performing team, he worked toward agent-based distributed cognitive architecture that could be implemented on the team’s graph-based processing fabric. He has experience in multiple other research programs in cognitive agents, discourse-based dialogue systems, and plan-based reasoning systems, and prefers to leverage biologically motivated design principles to construct a better understanding of human mental capabilities and adaptations.

He is the author of papers, invited talks, patent applications, and innumerable emails, but can’t be bothered to count them; researchgate has a list of most papers. He remains a Common Lisp programmer despite certain manglement types thinking Java was the wave of the future and he should just stop that.

Brad lives in Malta, NY with his wife (Chung Hee). He enjoys SF, movies, electronics, wine, and woodworking. His focus on improving embodied autonomous AI follows his passion for helping evolution get over the cul-de-sac exemplified by collectivist public policies, and other current memes detrimental to our progeny.