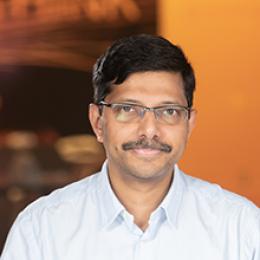 Biju has over 17 years experience in the field of detection and sensing. Building on a solid foundation of high field transport and impact ionization in semiconductors (PhD thesis), he had the opportunity to impact the design, simulation, characterization and integration of photodiodes, image sensors, 3D TOF sensors, x-ray and spectral CT detectors, across a broad spectrum of applications.

In his current role, Biju helps shape the technology road-map of GE businesses, explores commercialization opportunities for technologies, and also advances the limits of technology in partnership with government agencies.

Highlights of Biju's career at GE Research include (1) leading the advanced technology development of low noise, wafer scale CMOS x-ray detectors for the GE Healthcare Surgery business (https://www.youtube.com/watch?v=bOWJdpc5hNI) and (2) TCAD design of RadHard SiC power MOSFETs for NASA, followed by the reliability testing of these devices, in a joint effort with NASA engineers at the Cyclotron Institute in Texas A&M.

Biju received his Ph.D. at the department of Electronic and Electrical Engineering, The University of Sheffield, UK working on impact ionization in avalanche photodiodes in 2002. He then did his postdoctoral fellowship at Integrated Systems Laboratory, ETH, Zurich. Later Biju joined Synopsys Switzerland where he developed TCAD methodologies for image sensors. Biju then moved to ESPROS Photonics AG. Since early 2011 Biju is with GE Research.

Biju's work has resulted in 9 issued patents in areas related to many aspects of medical detectors.

He served in the Advisory Board for the European Medical Imaging Conference, MediSens.