The researchers, engineers, and technologists at GRC who help see, move, and create the future come from varying backgrounds with varying experiences. While no two paths are the same, there is one common thread – a love for science. Why Science? explores where our employees’ paths began – when and how their love for science was born. For some it may have been a favorite teacher or a gifted science kit; for others science may run in the family. The stories told will be fun, insightful, and may even inspire the next generation of scientists!

This Why Science? features Karla Kvaternik, a research engineer in our Controls and Optimization organization. Karla earned her PhD in Electrical Engineering from the University of Toronto, specializing in control theory and optimization. 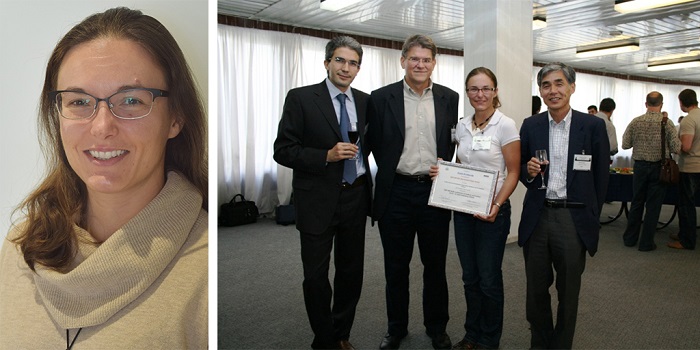 Karla is currently working on our U.S. Department of Energy (DOE)-funded project aimed at developing model-based countermeasures against cyber threats to wind power generation systems. Sophisticated cyberattacks can, for example, create false sensor readings that appear plausible because they are consistent with the system’s known dynamics. In partnership with GE Renewable Energy and Idaho National Labs, GE Research is leveraging advanced machine learning and control algorithms that are tied to rigorous physics-based models to detect, locate, and mitigate cyberattacks. As part of the team, Karla developed a set of “active” techniques to detect these false readings on wind turbine sensors.

Hey Karla… Why Science?
“Science is rigorous, beautiful and challenging, but most importantly, it is useful. As a kid, I remember being fascinated by many different subjects, but it was these attributes of science that really drew me into a career in engineering. Growing up, there were several memorable occasions where I felt awestruck by mathematics in particular. In junior high I set out to build a launching ramp for a large model glider, and felt that surely there had to be a way to figure out where to wedge a stand of a certain height in order to prop up the ramp at some particular angle. After trying to work this out for myself, I finally approached one of my teachers and asked if he knew of a way to do this. The answer, of course, was trigonometry – a tool I wasn’t going to formally encounter for another couple of years! My science-focused career path ultimately led me to GRC, where I am proud to apply fundamental concepts in systems theory to help develop renewable technologies, thereby doing my part to help address the world’s climate change challenges.”

"My science-focused career path ultimately led me to GRC, where I am proud to apply fundamental concepts in systems theory..."
Share to social
Media Contacts
MEDIA RELATIONS