Stepping into Retirement on a High Note

Stepping into Retirement on a High Note

Early fall, 1976: GE had just launched its first CT machine. Jack Welsh, then GE sector executive, visits GE Research and asks, “What am I supposed to do about medical ultrasound?” The very next week, Scott Smith arrives, a young physicist with a new PhD in magnetic resonance and condensed matter physics; he joins the hastily formed ultrasound team. Young Scott could not foresee the impact his work would have. Now – 45 years, two major imaging modalities, and several “first of their kind” ultrasound probes later – it’s clear he has helped revolutionize medical imaging and enhance public health in the U.S. and beyond.

As Scott steps into retirement this February, he does so with a major recognition – being elected a 2020 fellow of the American Physical Society (APS). Each year, no more than one half of one percent of APS membership can be elevated to fellowship. Scott was the only person elected for medical physics, and was cited for, “contributions to medical imaging, and especially innovations in ultrasound transducers." Moreover, Scott also became a life fellow of IEEE this year after achieving fellow status in 2017.

While Scott admits the recognition by his peers is gratifying, he rejects the individual focus. “All my work has been collaborations. I’ve been extraordinarily lucky to have wonderful opportunities: outstanding professors to learn from, exceptional colleagues to partner with, and impactful projects to work on throughout my professional life,” he said. “The support of my family, the people, culture, and environment of GE Research have been the catalyst for whatever accomplishments I’ve made or recognition I’ve received.” 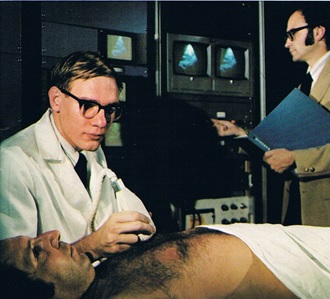 Scott then took a break from ultrasound and returned to his academic roots. He spent about five years helping develop GE Research’s 1.5T MR imaging and spectroscopy system. This prototype apparatus produced groundbreaking image quality and physiological analyses by operating at three or more times the field of competitive commercial systems. This led to the launch of the GE’s MRI business.

Returning to ultrasound, Scott and his team’s foundational work on designs and fabrication processes for multi-row transducer arrays achieved dynamic elevation focus and improved contrast resolution for cardiac imaging. This work continued through the 1990s, resulting in a very successful line of active matrix arrays for small parts, cardiac, abdomen, and obstetric imaging. These probes enable 2D imaging with a thin image slice over an extended range, providing substantially improved contrast resolution. Such images have had substantial clinical benefit, including early detection of small lesions and better discrimination of fluid versus solid structures, reducing the need for biopsies.

The transducer structure created by Scott is fundamental to all modern phased-array probes, especially probes for 2D and real-time 3D imaging. Since 2002, Scott has co-taught a course at the IEEE International Ultrasonics Symposium that has trained over 500 next generation ultrasound engineers.

In addition to acoustic design and multi-row transducer arrays, Scott led GE’s research and development in capacitive micromachined transducers (cMUTs), advanced piezoelectric materials, active cooling, and additive processing of piezoceramics and passive acoustic materials. Among his accomplishments here: the development of an innovative closed-loop cooling system that is fully contained within the ultrasound probe. This was essential to the introduction of high-performance 2D array probes with integrated high-voltage transmit and low-noise receive electronics for real-time 3D (“4D”) imaging.

In 2009, Scott partnered with fellow GE researcher and additive expert Prabhjot Singh to secure a grant through the National Institutes of Health (NIH) to refine the additive manufacturing processes for printing piezoceramic composites. The goal was to build ultrasound probes for the underserved maternal health market. Subsequent efforts included another NIH-funded project in 2015 concerning image-guided radiation therapy in which Scott and his team built a 4D ultrasound probe that works in a 3T MRI scanner.

Most recently, Scott has applied his recipe for success – a deep understanding of materials science and a cross-functional approach – to an NIH-proposal to integrate both ultrasound and optical technologies into a handheld lightweight probe. While these component technologies (e.g. highly sensitive transducers, and high fluence wideband laser excitation), along with appropriate control and signal processing, have been demonstrated independently, the major challenge is integrating them together as a working whole.

Scott holds 58 U.S. patents, has had more than 40 papers published on medical imaging and solid-state physics, and has presented at numerous technical conferences. His involvement with the APS and IEEE spans decades, and Scott has received many recognitions from GE and industry focused organizations. With an influence that’s felt across GE Research and beyond, Scott is one of the key reasons why GE’s ultrasound business is the market leader and has grown into the company’s largest imaging modality. Ultrasound advances, like those born at GE Research, are improving healthcare worldwide and enabling earlier and more accurate diagnosis of health-related issues.

Scott remains excited about the future of medical imaging. “Despite over a century of progress, only 40 percent of the world’s population has access to any form of medical imaging. Because ultrasound is safe, fast, portable, and inexpensive, it remains the most commonly used imaging modality. I’m looking forward to engineering advances in both hardware and software driving even greater impact for patients worldwide.”

Cardiac images then and now. The picture on the left was taken in September 1979 by the GE Research experimental prototype machine, the Ultrasound Cardiac Scanner-1 (UCS-1). The two images on the right are from GE’s current top of the line cardiology scanner, the Vivid E95.