NISKAYUNA, NY, March 7, 2020 – More than 140 students from 29 schools across the Capital Region put their knowledge of science and mathematics to the test in the National Science Bowl Regional Qualifiers at GE’s Research Center in Niskayuna. 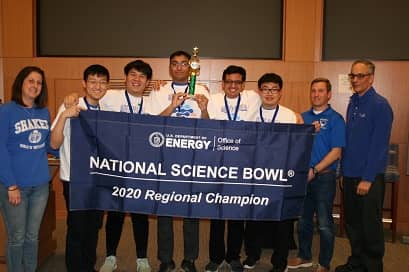 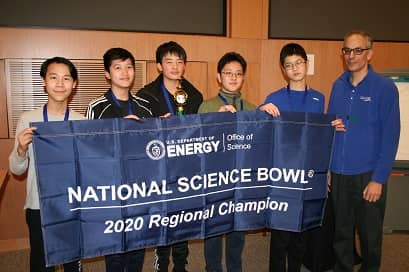 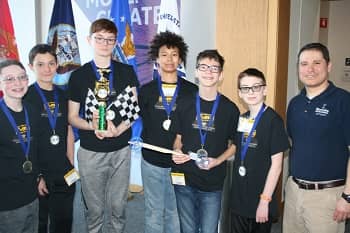 In addition to the Regional Qualifiers, middle school teams also participated in the annual model car challenge, which promotes teamwork and problem-solving skills.  Teams raced vehicles that they themselves designed and constructed, powered only by the energy of a falling weight. This year’s winner was: Maple Avenue Middle School.

“This weekend, the spotlight is shining on science and the 145 middle and high school students from across the Capital Region competing in the National Science Bowl Regional Qualifiers,” said Vic Abate, GE’s Chief Technology Officer. “Congratulations to this year’s winners and to all the students who participated in this year’s event. The future of innovation is in good hands!”

The Regional Qualifiers is the culmination of many months of preparation and hard work by students, their teachers and parents.   Students faced with a multitude of challenging questions, covering a wide range of science and technology topics.  Math, chemistry, and physics, astronomy, earth sciences, computer science were among the subjects covered.

The winning groups from the high school and middle school levels respectively will travel to Washington DC for the finals from April 30th – May 4th.

Other activities on Saturday included a tour with GE scientists in the Forge Lab, where some of the company’s most far-reaching ideas and concepts are developed and tested.  In addition, the event included other demonstrations of robots, makerspace activities such as 3D printing, science displays and demos.

Science Bowl is co-sponsored by GE Research, and Naval Nuclear Laboratory, with more than 100 volunteers helping to moderate, keep time and score, judge, and organize this annual competition.

Here is a list of this year’s participating schools:

Launched in 1991 by the US Department of Energy (DoE), the National Science Bowl® (NSB) is a highly competitive science education and academic event among teams of high school and middle school students who compete in a fast-paced verbal forum to solve technical problems and answer questions in all branches of science and math. Each team is composed of four students, one alternate student, and a coach. Regional and national events encourage student involvement in math and science activities of importance to the Department of Energy and the Nation.

GE Research is GE’s innovation powerhouse where research meets reality. We are a world-class team of 1,000+ scientific, engineering and marketing minds (600+ Ph. Ds), working at the intersection of physics and markets, physical and digital technologies, and across a broad set of industries to deliver world-changing innovations and capabilities for our customers.  To learn more, visit our website at https://www.ge.com/research/.

“This weekend, the spotlight is shining on science and the 145 middle and high school students from across the Capital Region competing in the National Science Bowl Regional Qualifiers. Congratulations to this year’s winners and to all the students who participated in this year’s event. The future of innovation is in good hands!” -- Vic Abate, GE’s Chief Technology Officer
Share to social
Media Contacts
MEDIA RELATIONS